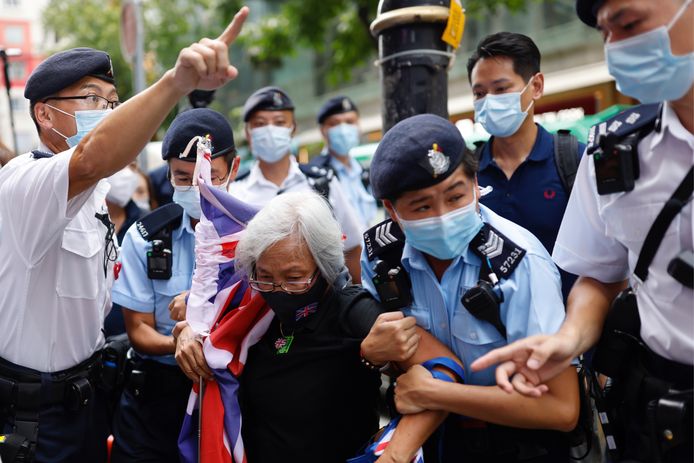 A Hong Konger faces nine years in prison for terrorism and inciting separatism. Tong Ying-kit is the first person to be convicted under the controversial security law that the Chinese communist regime imposed on the former British colony last year. His lawyer is appealing.

Because it concerns the first conviction, the sentence imposed is seen as an important indicator for similar lawsuits in the future. The sentence is divided into 6.5 years for the separatism charge and 8 years for terrorism. Because the sentences can largely be served simultaneously, in practice they constitute a sentence of 9 years in prison.

The Hongkonger Tong Ying kit drove its motorcycle into riot police officers on 1 July last year – shortly after the law went into effect. He was carrying a protest flag with slogans against Chinese interference in Hong Kong.

Justice sees this as a call for separatism. The three judges agree. They think that the slogan ‘Free Hong Kong, revolution of our time!’ may incite others to an act of separatism, which is illegal. They also ruled that Ying-kit had a “political agenda” and that his actions caused “serious damage to society,” local media reported.

Because the officers were injured by his action, Ying-kit was also charged with dangerous driving. But the judges ignored that.

Ying-kit, who previously worked as a waiter, could have been given a life sentence. His lawyer had asked the judges to keep the sentence low for his client. He argued that the public was already aware of the seriousness of the case even without a heavy penalty.

In addition, he described Ying-kit as “a decent young man” who had only done something “stupid.” The sedition for which his client was charged was also, according to him, ‘of minor nature’. After the verdict, he indicated that he would appeal against the sentence.

The court disagreed with this argument on most points. One of the three judges, Esther Toh, stated that if Ying-kit had pleaded guilty, it would have been the clearest “expression of remorse.” In addition, the judges ruled that Ying-kit used his motorcycle as a potentially deadly weapon, and that his actions “deliberately challenged” the police.

Ying-kit insisted he never called for Hong Kong to secede from China. His lawyer claims it was an ‘accident’. Much has been said about the process. It took place without a jury. This is contrary to the legal tradition in Hong Kong. The three judges were also selected by Hong Kong’s pro-Chinese director Carrie Lam.

Beginning of the end

That he was convicted on the basis of a flag is, according to Amnesty, a violation of international law. Mishra: “This feels like the beginning of the end of freedom of expression in Hong Kong.”

More than 100 people have now been charged under the security law, including journalists and pro-democracy activists. Among them also Jimmy Lai, ex-boss of the disbanded pro-democracy magazine Apple Daily.

Most of the detained Hongkongers are not eligible for bail. They must await their trial in prison.

The controversial security law has become the main tool of China’s crackdown on the pro-democracy movement. Beijing wants to strengthen its grip on Hong Kong with the law. The security law prohibits subversive activities, terrorism, the pursuit of independence and foreign interference.

The governments in Beijing and Hong Kong maintain that the security law was needed to bring stability after the often violent protests of 2019. According to the Chinese authorities, similar laws exist in other countries.

Watch our news videos in the playlist below: