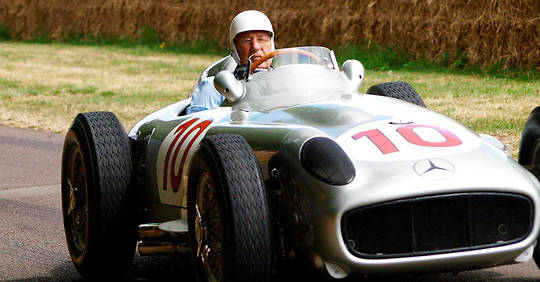 With 16 Grand Prix victories between 1955 and 1961 without ever becoming a Formula 1 world champion, the Briton Stirling Moss, “crownless champion” in motorsport, died at the age of 90. “It was too much. […] He just closed his eyes, “his wife, Susie Moss, told the PA news agency on Sunday. Stirling Moss died from a long illness.

Four times second in the F1 World Championship (1955, 1956, 1957, 1958) and three times third (1959, 1960, 1961), he retired from motor racing after a serious accident in 1962, except for occasional returns. His exploits overlapped the end of Juan Manuel Fangio’s career and the beginnings of that of Jim Clark, explaining the leanness of his record and his nickname “champion without crown” to use the title of a book dedicated to him . But Sir Stirling’s career – he was knighted in 1999 – was not limited to F1. Endurance, record for pure speed, hill races … his track record is rich with 212 victories for 529 races contested in total.

He thus won the 24 Hours of Le Mans in 1956 for Aston Martin and an anthology victory at the “Mille Miglia” in 1955 for Mercedes-Benz. That day, with his team-mate, the English journalist Dennis Jenkinson, nicknamed “Jenks”, he triumphed over Ferrari and especially Fangio, also over Mercedes, with more than half an hour ahead of 1,600 kilometers and some ten hours of racing. The photo of his face blackened with oil and dust where the shape of his pilot’s glasses takes shape is part of the legend of motor racing.

“It was the only race I ever did that scared me,” he said later, attributing his victory to the machine invented by “Jenks” where the road traps spotted at advance appear on a roll of paper in a metal box, the ancestor of the “road book”. Six weeks later, Mercedes-Benz withdrew from racing after the 24 Hours of Le Mans tragedy, when 83 spectators were mowed down in the main stand by the “silver arrow” of Frenchman Pierre Levegh. At the time of retirement, decided in Stuttgart, the Fangio / Moss crew nevertheless leads the race.

Winning as your only goal

For Moss, victory is the only goal. “I know I was faster than some of the drivers who won the World Championship. But driving to finish and scoring a few points didn’t interest me. Some can do it and I have seen it often, but my philosophy was different. I had absolutely no good psychology to win titles, I am above all a runner, “he confided in 2009 to the magazine Motorsport.

In 1958, his compatriot Mike Hawthorn was crowned F1 world champion with only one victory in the season, for four at Moss, but greater consistency which finally brought him one point more. Knightly, Moss intervened so that Hawthorn recovers his second place obtained at the Portuguese GP after having been initially disqualified, thereby depriving himself of the title.

His serious accident in 1962 left him in a coma for a month. After a long recovery, in May 1963 he took the wheel of a racing car for a few laps before stopping at the pits and declaring laconically: “I’m going to stop. He lost his sensations, his visual acuity and his ability to go fast.

In the 1970s, however, he participated in the London-Sahara-Munich rally, but gave up in the Algerian sands. Then there are a few races at the antipodes with his former F1 friends Jack Brabham and Denny Hulme before a brief return to the British touring car championship in the early 1980s. True to the end of his conviction that it is better to be “A driver who prefers to lose by going fast than to win by driving slowly”, he decides at the age of 81 to never drive again after a fright during a vintage car race on the Le Mans circuit.

The biggest scammer was a talented poet

Interview “Humanity and solidarity are experiencing a renaissance”