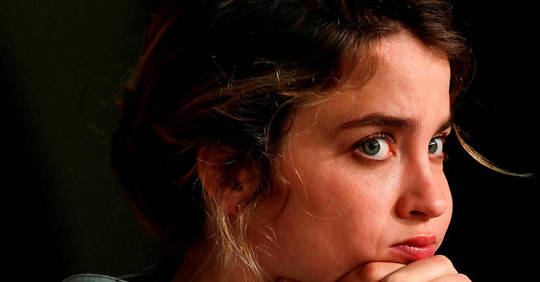 It had caused an earthquake in French cinema and tried to alert the profession. In an interview with New york times, Adèle Haenel returned to the charges of “repeated touching” when she was a teenager which she brought against the director Christophe Ruggia, who has since been indicted. The French actress notably estimated that “France has completely missed the boat” of #Metoo. “There is a #MeToo paradox in France: it is one of the countries where the movement has been the most followed, from the point of view of social networks, but from a political and media point of view, France has completely missed the check, “she said in an interview published Monday in English and French on the website of the American daily.

“We have a justice system that does not make violence against women a priority […]. Justice must be improved to better treat women victims of sexual violence, ”adds Adèle Haenel. “French law defines rape as a sexual act committed by means of violence, surprise or coercion: it is centered on the technique used by the aggressor, not on the absence of consent of the victim”, estimates the actress.

For Adèle Haenel, “many artists have confused, or wanted to confuse, sexual play and aggression. The debate was positioned on the question of the freedom to annoy and on the alleged puritanism of feminists. While a sexual assault is an assault, not a libertine practice. »A few days before the Cesar ceremony, which will take place on Friday with I accuse, Roman Polanski’s latest film, among the favorites, Adèle Haenel warns: “To distinguish Polanski is to spit in the face of all the victims. It means: it is not so serious to rape women. “

Faced With New Rape Charges, Director Roman Polanski Takes Top Appointments With His Film I accuse, which goes very wrong with feminists and public opinion. Associations like Dare feminism! call for a gathering the evening of the ceremony in front of the Salle Pleyel, in Paris. Asked about her artistic projects possibly affected by the impact of her accusations against the filmmaker Christophe Ruggia, Adèle Haenel believes “that she has done something good for the world and for her integrity”. “It doesn’t matter if it hurts my career […], I’m going to do theater at the end of the year, but I don’t know yet how it will affect the way people see me, ”she says.