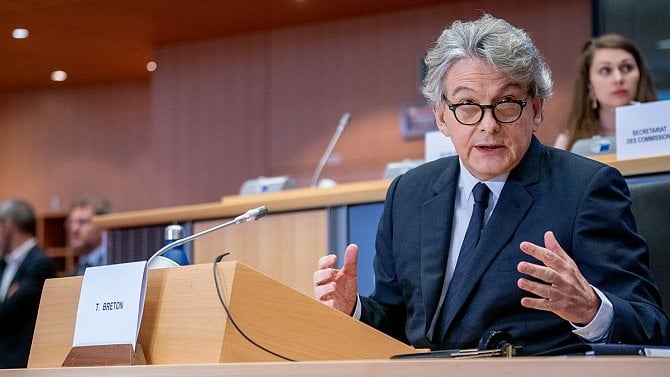 In recent months, the European Union has begun to address so-called technological sovereignty at various levels. It touches where where. For example, the old continent is concerned that it is dependent on US clouds or the production of scarce chips from the US and Asia.

She therefore began to look for a solution. The European Commission wants to send up to 135 billion euros to the semiconductor sector, a European network of supercomputers has been built for some time, in which Ostrava is also involved, a European processor is being prepared and in the case of clouds the Gaia-X project was formed. The main drivers of the idea of ​​this “European cloud” are France and Germany.

However, not everyone in Europe perceives current developments around Gaia-X and technological sovereignty positively. The Czech Republic also began to respond through the Confederation of Industry and Transport (SP CR), which found support, for example, at the Ministry of Industry and Trade.

“There are fears that efforts to ensure technological sovereignty will lead to restrictions on the internal market and free trade,” said the SP CR in an official statement. “It makes more sense to focus on technological autonomy, which will ensure immunity to economic pressure from third countries and the right of choice for both consumers and companies. They must be able to choose the best partner, product or service. “

There are many uncertainties surrounding Gaia-X. The project was primarily joined by technology and industrial companies from France and Germany, with the need to have some kind of standards for handling data when using clouds, where to store them, ensure their portability and the like. In the meantime, however, news began to emerge about the creation of European competition for Microsoft Azure, Amazon Web Services et al. One cloud was announced by Deutsche Telekom with OVH, the second event by OVH this time with Atos.

The Confederation of Industry, which also includes US IT companies such as Google, Microsoft, IBM, Amazon and Cisco, is concerned that the promotion of this European solution will lead to protectionism. One example for all: although non-European companies like Google are supposed to have access to Gaia-X, they cannot be full members when they are based outside Europe.

See also  A special for the Dakar is heading for the roads! The desert Ferrari wants to be the first car of its kind

“If these suppliers meet the conditions that Europe wants from them, it is not a problem to let them into the project,” thinks the vice-president of the Confederation of Industry Milena Jabůrková, otherwise also an IBM employee. “The situation is solved on the basis of the national principle. In our opinion, it should be the case that those who adhere to European values ​​should have the opportunity to cooperate on the European market, “adds Jabůrková for Lupa.

France’s pressure as a result of Brexit

Among the critics of Europe’s activities in technological sovereignty are the views that the real motivation is mainly France, which is trying to push its “national champions”, in the case of clouds, especially Atos and OVH. After all, France pushed the Gaia-X project to a large extent. “They didn’t leave much to say to anyone but Germany,” said one of the experts involved.

The Confederation of Industry also agrees with this view. “This is one of the consequences of Brexit, when there was a regrouping in the distribution of forces. Following the departure of the United Kingdom, a strong liberal voice is lacking in the European Union. French President Macron has come up with a very nationalist agenda and is well prepared for this. France is moving away from NATO and sees the United States as a rival similar to China, “says Jabůrková. It can also be paraphrased that the French behave like the French, only now they have more power in Europe.

The main person promoting Gaia-X and other activities in Europe is the French European Commissioner for the Internal Market Thierry breton. He previously served, for example, as the head of France Telecom, the manufacturer of the Bull supercomputers, and until 2019 as the president and CEO of the aforementioned Atos. Breton has a significant influence on technological neutrality activities.

“There is a real risk that some projects, for example, will not be launched by American clouds and only European players will be artificially pushed through,” warns Jabůrková. At the same time, Gaia-X focuses only on protecting the European market and has no export ambitions that Azure and others have long had. According to her, in the case of a strongly export-oriented Europe, there is a risk that if it begins to close, it cannot offer a sufficient counterweight to allow the blockage to afford.

“I want Avast to partner with the best cloud service provider, who is constantly innovating, not someone who is weak but meets geopolitical criteria,” Avast’s chief technical officer added to the criticism. Michal Pěchouček. “Politicians need to support the innovation potential of European companies, not lock them up in the past.”

“We are addressing the protectionism of our market, but we are no longer asking why Europe is lagging behind in IT. It is necessary to address fragmentation, regulation and the like, “continues the Confederation of Industry.

However, opposition to the activities of Breton and France is gradually beginning to form in the Union, primarily through several informal coalitions. One of them is a member of the Czech Republic and there are also countries such as Sweden and Ireland. Twelve European prime ministers have already sent two letters to the European Commission warning of growing protectionism. The issue of technological sovereignty will be addressed by the European Council.

“Now the point is for the individual countries to find enough courage and effort to replace the position of the United Kingdom,” says another of the people involved. The Vice-President of the European Commission responsible for digitization also expresses support for balancing activities against France Margrethe Vestager.

At the end of March, the situation was also addressed by the informal competitiveness council within the Czech government. Ministers express the view that the protectionist path should not be taken, but that a form of technological independence was still sought. This could be described as strategic autonomy. The point is that Europe should not be dependent on, for example, a single supplier, who could then blackmail us in a way, and at the same time invoke legal protection.

See also  Not Tesla! Mercy-BMW will produce cars in Indonesia

“It is entirely appropriate to support our own capacities and investments in the EU for the production of vaccines, drugs, microchips and other strategic products. At the same time, open access to trading partners must be maintained, supplies must be diversified and, in cooperation with partners, free international trade must be promoted, “said the Minister of Industry Karel Havlíček After discussions with European Ministers for Industry and the Internal Market.

In addition to the European cloud, the discussed events surrounding Europe’s chip production capacity also raise some concerns. Europe is working on how to ensure production in this area. He is waving billions of euros and trying to persuade TSMC or Samsung.

“There is simply no business model for a European factory, mainly due to a lack of customers,” Reuters said. In other words, there are no companies like Apple in Europe that can take enough chips from factories to make huge investments in construction pay off. Efforts should thus be stepped up towards Europe revitalizing its chip design capabilities.

“For example, in order for TSMC to decide to build production in Europe, it would require a significantly larger number of companies, such as Tachyum,” agrees the founder and head of the Slovak company Tachyum Radoslav Danilák, which is currently preparing for production its universal Prodigy processor.

Further contributions on technological sovereignty in Europe can be found at Science Business, Business Europe, ECIPE and twice Politico.