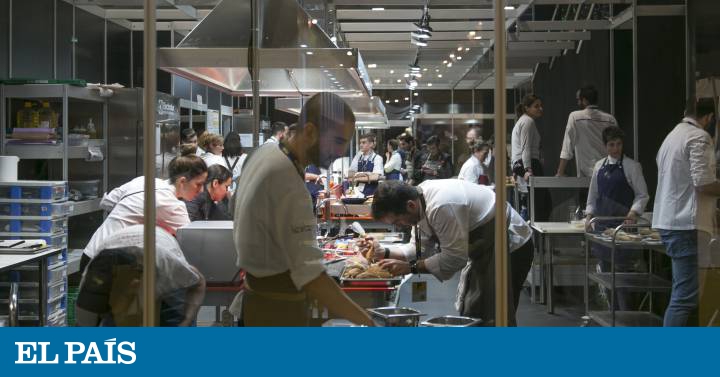 Without neglecting emulsions or spherifications, haute cuisine claims its attachment to reality: it wants to be urban while remaining linked to the land; global while defending the genuineness of local pantries. It seeks to capture the soul of the products, “dispense with the superficial,” says José Carlos Capel, gastronomic critic of EL PAÍS and president of Madrid Fusión, a gastronomic congress that takes place between January 13 and 15. This year, the event is coming of age – it celebrates its 18th edition – in a mutant, complex and hyperconnected world.

Connections that not only promote the fusion of recipes and the mixture of ingredients, but also the collection of data to analyze what seduces the palate of people in each region of the world. “We are the homo digitalis”, Juan Carlos Martínez, director of R&D at Siro Foods, summarized in his speech,“ 95% of people use the Internet at least once a week; 85%, social networks ”.

With these data, his team has analyzed the emotions that dishes and flavors produce in people around the globe. Thus, they have concluded that Europe is concerned with sustainability – which encourages exploration of products such as algae or hemp; that does not tolerate vermin and that sees the mild spiciness with good eyes. Information that could help cooks to create dishes that hit the consumer’s taste right. .

“It is a tool that brings together tastes”, defined chef David Muñoz, with three Michelin stars at DiverXo. The cook associated the tool more with mass consumption than with haute cuisine. “Restaurants are linked to human talent; you cannot dehumanize the kitchen ”, Muñoz replied from the stage of the auditorium in Pavilion 14 at Ifema. This year, and for the second time since its foundation, Madrid Fusión has left the Congress Center of the fairground to settle inside. “We had limited space to grow,” explain sources from Vocento, owner of the event since 2017.

During Muñoz’s speech, the auditorium was overflowing, reflecting the muscle of the event, which he hopes to exceed the more than 15,000 attendees (between visitors and congressmen) last year. Many are waiting to take photos with one of the more than one hundred chefs invited to the event: Joseán Alija, Andoni Luis Aduriz, Vicky Cheng or Niko Romito, chosen chef of the year in Europe and champion of simplicity and locality. The gastronomy currently lives that duality: it is viral on social networks but at the same time, aware that it must remain attached to the earth.

“If we take two from one fish, we will fish less, avoiding overexploitation. It is a sustainable measure, ”said Australian Josh Niland, an expert in matured fish, in the early morning. That is to say, it cures them, but “without producing mojamas”, clarified the chef who was accompanied by the former three-star Dani García. “Currently, we lose 55% of the fish and it cannot be,” continued the revolutionary Niland, in front of the Saint Peter restaurant and the Fishbutchery (a fish delicatessen). “The eyes, crushed like a puree, are dehydrated and fried; the liver, like duck or chicken, we do in foie gras, a product that we offer in our delicatessen ”, explained the processes that apply. With nuances, he shares vision with Ángel León and his marine sausages. If León is called “the chef of the sea”; Niland is “the butcher of fish”.

See also  Heger had only one relative left! LOVED grandson BUT ...

If haute cuisine incorporates the big data to his speech; shows his concern about the environmental crisis or takes allergens (lactose, gluten …) into his cookbook, he is also aware of the rise of cities. For this reason, instead of being a guest country, the congress has long chosen several cities around the globe that stand out for their gastronomic effervescence and invites their chefs. Tokyo, Moscow, Saint Petersburg and Cape Town are selected this year.

On the other hand, Madrid Fusión is a large container that, in addition to a congress, hosts several subsections. Enofusión focuses on the world of wine and offers tastings, discussion tables on the Madrid tavern or a talk on the icewine (ice wines, made at temperatures below freezing). Savor Spain programs workshops, showcockings and activities while The Drinks Show focuses on the mixes and the innovative Madrid International Pastry (MIP) does the same with bread, chocolate and sweet. A recognition to bakers and pastry chefs who have spent years crying out for the return of traditional bread and good sourdough. Madrid Fusion 2020 also proposes a return: “To the essence,” says Capel, “to rediscover the product.”

The Drinks Show has been held within Madrid Fusión for three years, claiming the role of cocktails in gastronomy. “Be liquid, my friend” is the motto of the event that invites you to try cocktails as well as to meet cocktail shakers from all over the world.

See also  Mauricio Diez Canseco's eldest son was in 'En boca de todos', and Luciana Fuster was quite flirtatious and said that he was more handsome than Sebastián Yatra | OPINION

On January 13, the selection of the best cocktail bars in Spain and Portugal was presented, made by a group of 16 experts. The list is made up of 36 places — three in Portugal, 16 in Madrid and Barcelona, ​​and the rest in other towns in Spain. Among the chosen venues include the Madrienian Salmón Gurú, by Diego Cabrera; the lisboeta Red Frog; the Paradiso in Barcelona; or Umalass de Zaragoza.