KOMPAS.com – There are celestial objects called “falling stars” by the public. However, it is not a star.

Comets are important to scientists because comets are primitive objects left over from the formation of the solar system.

They were among the first solid objects to form in the solar nebula.

Also read: Get to know what a nebula is, the birthplace of stars in outer space

What is a comet?

Launch NASA, Comets are cosmic snowballs of frozen gas, rock, and dust that orbit the Sun. Comets range in width from a few miles to tens of miles.

When frozen, comets can be the size of a small town. As the comet gets closer to the Sun, some of the ice begins to melt and boil, along with the dust particles.

These particles and gases create a cloud around the nucleus, which is called a coma. The coma is illuminated by the Sun.

Dust and gas from comets form tails that stretch from the Sun for millions of miles. This is why comets are often referred to as tail stars.

There may be billions of comets orbiting the Sun in the Kuiper Belt and even the more distant Oort Cloud.

The number of comets known today is 3,743 comets.

Also read: Getting to know Sirius, the Brightest Star in the Night Sky

Where do comets come from? 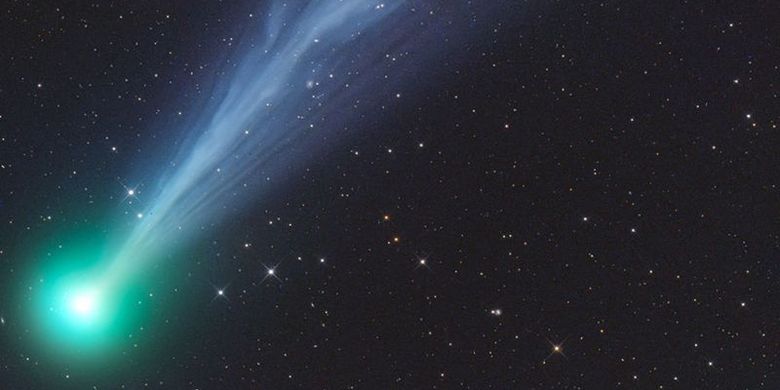 Launch Sky and Telescope, July 15, 2014, comets spend most of their lives away from the Sun in places far from the solar system.

Many comets come from two regions, namely the Kuiper Belt and the Oort Cloud.

The Kuiper Belt is a disk of mostly icy bodies that extends from around Neptune’s orbit (about 30 AU on average from the Sun) to about 50 AU from the Sun.

The Oort cloud is at the edge of the Sun’s gravitational influence (about 50,000 to 200,000 AU) and is divided into two regions, the inner and the outer. Both consist of bodies of ice.

Short-period comets, which orbit the Sun in 200 years or less, are usually Kuiper Belt objects.

While long-period comets that take hundreds or thousands of years to orbit the Sun generally come from the Oort Cloud.

quote Britannica, Comets form in the outer regions of the solar nebula, which are cold enough to allow volatile ice to condense.

It is generally considered to be beyond 5 astronomical units (AU; 748 million km, or 465 million miles), or beyond Jupiter’s orbit.

Because comets have been kept in orbits far beyond the planets, they have undergone slight modification processes that have melted or altered larger bodies in the solar system.

Also read: Getting to know Canopus, the second brightest star in the night sky NOIRLab/NSF/AURA/ J. da Silva/Spaceengine via PHYS Comet Bernardinelli-Bernstein (BB), artist depicted as possibly visible outside the Solar System. This comet is estimated to be about 1000 times more massive than an ordinary comet, making it the largest comet ever discovered and still active.

Still from the page NASA, One of the comets ever discovered was Comet 103P/Hartley (Hartley 2).

Hartley 2 was discovered by Malcolm Hartley on March 15, 1986 using the Schmidt Telescope at Siding Spring Observatory in Australia.

Comet 103P/Hartley (Hartley 2) is a small oblong (or peanut) comet. The core is about a mile (1.6 kilometers) in diameter. Hartley 2 takes about 6.47 years to orbit the Sun once.

In addition, there is Comet 109P/Swift-Tuttle. Comet Swift-Tuttle was discovered in 1862 independently by Lewis Swift and Horace Tuttle.

Comet 109P/Swift-Tuttle takes 133 years to orbit the Sun once.

Swift-Tuttle last reached perihelion (closest approach to the Sun) in 1992 and will return again in 2125.

Swift-Tuttle is a massive comet, its nucleus measuring 16 miles (26 kilometers) across.

Next up is Comet Shoemaker-Levy 9 which was discovered by Carolyn and Gene Shoemaker and David Levy in a photo taken on March 18, 1993, with the 0.4 meter Schmidt telescope on Mount Palomar.

When the comet Shoemaker-Levy 9 was discovered in 1993, it had torn apart into more than 20 pieces surrounding Jupiter in a two-year orbit.

Further observations revealed the comet (believed to be a single body at the time) had made a close approach to Jupiter in July 1992 and had been torn apart by tidal forces resulting from the planet’s strong gravity.

The comet is thought to have been orbiting Jupiter for about a decade before its death.

Elisabetta Casellati for president. Portrait of the quirinabile president of the Senate