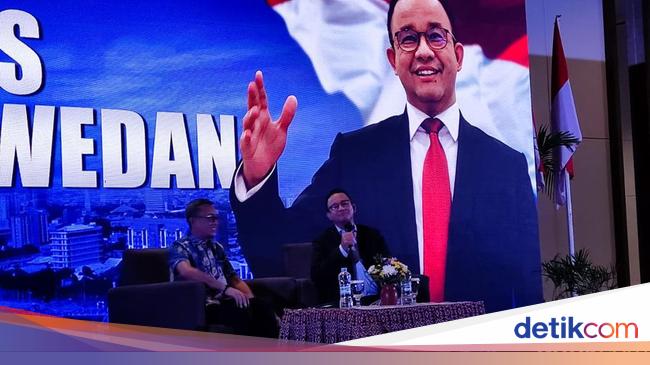 DKI Jakarta Governor Anies Rasyid Baswedan responded to a question regarding PSI General Chair Giring Ganesha who alluded to Pharaoh’s project when he met displaced residents around the Jakarta International Stadium (JIS). This is Anies’ response.

The question regarding the Pharaoh project was conveyed by reporters to Anies during a press conference session at the ‘South Sulawesi Community Welcomes Anies Baswedan’ in Makassar, Saturday (22/1/2022). Anies then answered the question with a relaxed gesture.

“There is no (response),” said Anies when asked about Giring’s allegation about the Pharaoh project. Anies then invited other journalists to ask other questions.

“So it’s just an illustration. This is one of the projects that was carried out without a lot of excitement. Then there will be applause when it’s finished. Let’s just watch it calmly,” said Anies explaining the JIS project.

Anies continued, in Jakarta it is often the little things that are brought up. On the other hand, sometimes big things become small.

“The big one becomes small, the small one becomes big. Someone’s stuck just that’s a lot of people. Even though the stuff is just this big. So we try to run it well,” he added.

Anies then again touched on the JIS project, saying that the stadium would later become a symbol not only for sports activities.

Previously reported, Giring Ganesha returned to the field to meet with residents of DKI Jakarta. Giring met residents who were called evicted victims.

The Giring action met with residents who were claimed to have been evicted victims, which he uploaded on Twitter, Friday (21/1) yesterday. In the photos he shared, Giring was seen talking with residents at a location that was seen close to the stadium.

It is not known exactly where Giring met the residents who he called eviction victims because he did not include the location. However, the stadium in Giring’s upload is similar to the design of the Jakarta International Stadium or JIS.

In the caption attached to Sleigh, he alludes to Pharaoh. Who is being insinuated by Giring?

“As usual @psi_id always carries out social actions for residents and coincidentally today we found some residents who were less fortunate being evicted by a project that used to be said only Pharaoh could do it,” said Giring.

its value falls almost 50% from its peak value in November

Why researchers still know so little about long-term covid