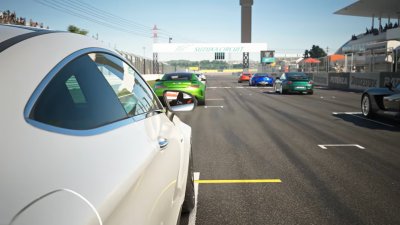 This is the lot of many big productions, but the launch of Grand Touring 7 didn’t go well. Players’ complaints include an unfair economy system that takes way too much game time to unlock cars, and unstable servers, issues crystallized by update 1.07 which made online play unavailable for 24 hours and changed the principle of certain rewards without explanation.

Kazunori Yamauchi, président de Polyphony Digitalmade a point of apologizing for this imbroglio on the PlayStation Blog. It will thus allow affected players to recover a pack of unpurchased credits of 1 million Cr., obtainable by logging in before April 25. Above all, he explained about the changes in the game’s economy: the modifications of the latest patches actually pave the way for reward improvements coming in April, which he details here. He also plans to add events later World Circuitfrom Courses d’Endurance and Online time trialsas well as’a car resale system.

Thank you for your unwavering support and your constant feedback on Gran Turismo 7, you do not speak in a vacuum. I would like to apologize for the frustration and confusion that was caused by our update last week, which not only crashed the servers, but also resulted in adjustments to the in-game economy that have been made without giving a clear explanation to our community.

We know this isn’t the Gran Turismo gaming experience you’ve come to expect, and we’ll be extending a gesture of goodwill to you in the form of a 1 Million Cr. Unpurchased Credits Pack, available for all players who have been affected*. You will find these credits in your accounts shortly. Be sure to log into the game before April 25 to claim your credits.

The previously deployed update patch was supposed to rectify an issue with inconsistent rewards in a portion of World Circuit Events. But, to re-establish the desired balance and offer fairer rewards, based on time invested and on completion, it was necessary to recalculate the entire reward system.

To improve the gaming experience, we will be releasing a massive patch at the beginning of April. The number of Events will be increased, and we will re-establish the reward system with a better balance throughout the game, so that all players can benefit.

Updates that will go into effect at the beginning of April:

Beyond these changes, there will also be a few additional patches rolling out between now and the end of April that will add new cars and tracks, as well as make other changes.

Finally, we would like to take this opportunity to announce some of the short-term updates we are working on right now. We cannot give you an exact date or be more precise at this time, but you will receive all the details in advance on www.gran-turismo.com.

We want to thank you for your continued patience and valuable feedback as we evolve and modify GT7 to make it as enjoyable and rewarding as possible for as many players as possible. We always want to keep the lines of communication with our community open, so we can work together to build the best racing experience possible.

As a reminder, the studio has committed to delivering free additional content for a long time after the launch of the title on PS4 and PS5. It is therefore high time to join the community by obtaining Grand Touring 7 from €56.40 on Amazon.fr.

Read also: TEST Gran Turismo 7: an episode that holds up?

Miraculous recovery from ¦widerski. A scandal in the frame. We know the circumstances of the Polish national team case

Legendary Alain Delon no longer wants to live. I have to give him euthanasia, his son confirmed