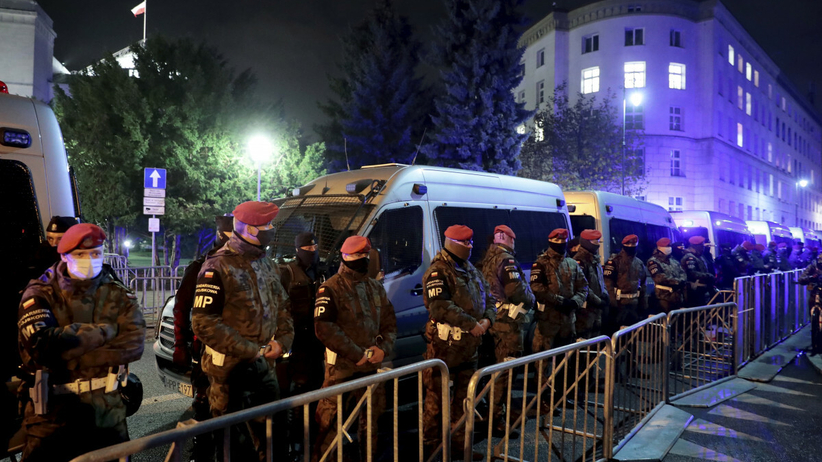 The government was to analyze the option of using the army to secure the situation on the streets during last year’s Women’s Strike protests – according to an e-mail from Michał Dworczyk’s mailbox. The head of the Chancellery of the Prime Minister was to send a message dated October 27, 2020 to several associates, including Prime Minister Mateusz Morawiecki. This is not the first leak to come from Dworczyk’s box.

For a week, the Russian platform Telegram has been publishing content allegedly from the e-mail box of Michał Dworczyk, who fell victim to a hacker attack.

Break-in into the e-mail box of the head of the Chancellery of the Prime Minister. There will be a secret session of the Seym

The head of the Prime Minister’s Chancellery stated last week on Twitter that the relevant state services had been informed in connection with reports of the hacking of his e-mail and his wife’s inbox, as well as their social media accounts. He added that “some of the disclosed information and alleged e-mails have been prepared.”

The head of the Chancellery of the Prime Minister also emphasized that “there was no classified, proprietary, secret or top secret information in the e-mail box subject to the hacking attack”. Dworczyk assessed that “it can be said with certainty that the purpose of this type of cyberattack is disinformation, and therefore the relevant special services of the Republic of Poland conduct all necessary explanatory activities”.

The prosecutor’s office is already investigating this matter, and the case has also been transferred to the Internal Security Agency. Let us remind you that in connection with the cyber attacks on parliamentarians and members of the government, he asked Marshal Elżbieta Witek to convene an extraordinary and secret session of the Sejm. It will start on Wednesday at 9. It is known that in the Meeting Room the cameras will be turned off and set in such a way that it is not possible to record the meeting. The wi-fi network will also be turned off, and the telephones in the Meeting Room and adjacent rooms as well as the TV studio will be disconnected.

Meanwhile, more screens of e-mail correspondence between government members are circulating on the web. One of them shared, among others Dariusz Joński, member of the Civic Coalition. “Therefore, tomorrow’s session of the Sejm is to be closed. The e-mail shows that the government was considering the use of the army against the protesters. We are waiting for the public comment of Mateusz Morawiecki and Michał Dworczyk,” he wrote on Twitter.

The leaked e-mail is dated October 27, 2020. Its author is Dworczyk, and its addressees are Prime Minister Morawiecki, government spokesman Piotr Muller, head of the Prime Minister’s Political Cabinet Krzysztof Kubów and Mariusz Chłopik, marketing director at PKO BP (according to Onet: once deputy head of the Government Information Center).

Dworczyk participated in a conversation on how the government should respond to the Women’s Strike. Last autumn was a hot time in Polish public life. After the judgment of the Constitutional Tribunal on abortion, thousands of people took to the streets all over Poland to protest against – in their opinion – the scandalous decision that de facto tightened the abortion law in the country. During some demonstrations of order in the streets, officers of the Military Gendarmerie guarded the streets, which was the result of the Prime Minister’s order, which was dated on October 26, 2020.

Dworczyk’s mail from October 2020 leaked. The government considered using the army during the protests?

The content of the e-mail shows that during these talks the idea of ​​sending troops to the streets was considered in order to secure the gatherings and keep order during the demonstrations. Dworczyk – who sums up this discussion in this message – writes directly that this variant would be a bad solution.

“The use of the army in the current situation raises numerous risks of provocation, accusations, huge image losses for the government and the army, and raises extremely negative associations. The current situation should be secured by the police forces and support from the fire brigade” – wrote Dworczyk. He emphasizes that, for example, the Territorial Defense Forces (a formation created during the PiS era) could then be considered a “political militia”, which would have a negative impact on its reputation.

Keeping calm in the face of an aggressive crowd of thousands requires many years of appropriate preparation, which soldiers do not have […] The use of the military would be an image failure and would suggest that the government treats the demonstrators as a threat

Later in the e-mail, the head of the Chancellery of the Prime Minister claims that the use of the army against demonstrators would expose soldiers to the loss of good name, among others “by placing them in front of women and children,” it would also expose the state to associations with authoritarian systems (such as Belarus or Venezuela). He also notes that in none of the EU countries (he gives the example of “friendly” Hungary) the army was used to suppress protests.

“Protests must expire on their own – despite epidemic restrictions, it is impossible to limit their occurrence. Social emotions related to the verdict of the Constitutional Tribunal are now greater than the fear of contagion. One should constantly call for dialogue; the road to rational statutory solutions is open. Pointing to the epidemic threat “- we read in the e-mail.

According to the minister, the military could only be used to secure public buildings and churches, combine uniformed formations in order to provide aid, or use properly trained soldiers to operate medical points. Dworczyk also claimed that “the role of the state in the current situation is to publicize the problem and to try to establish a dialogue between the opposing parties”.