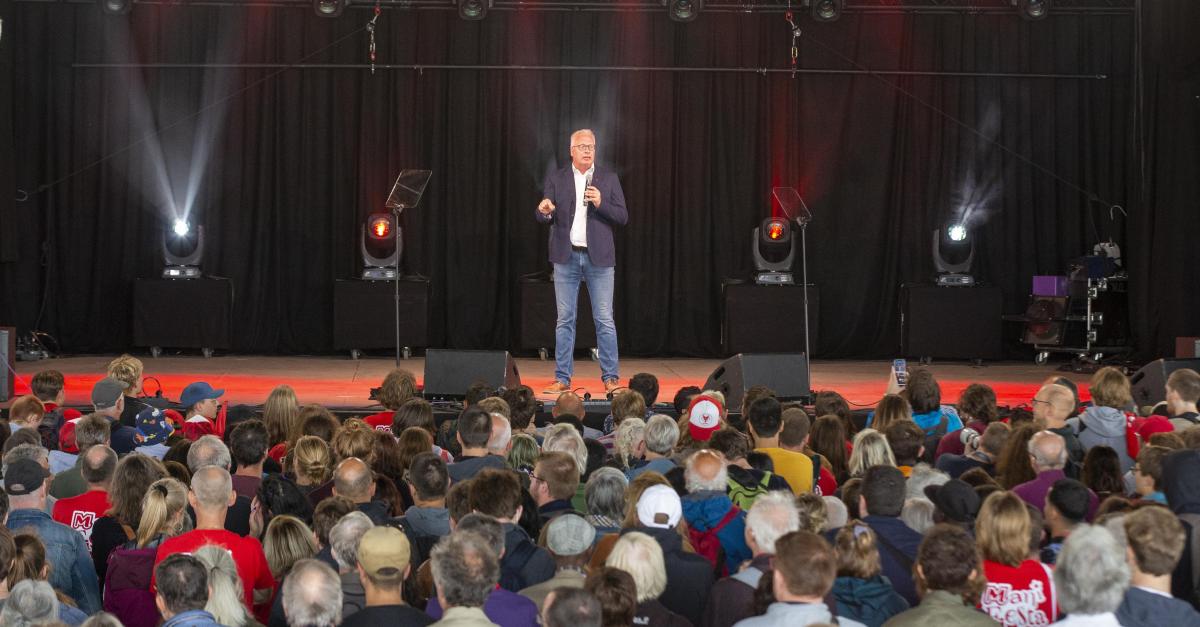 Through Text and photos Belga.

The president of the PTB-PVDA, Peter Mertens, attacked on Saturday the plan to reform the pension system presented by the Minister of Pensions, the Socialist Karine Lalieux, accusing him of maintaining the retirement age at 67 years old, despite electoral promises before the May 2019 polls.

“What promises did the Socialist Party make, what promises did Vooruit make, before the election? ‘We will not enter a government if the pension age remains at 67’. What did the Greens say? ‘Increase pensions, not the pension age’. This is what they said. But the pension age remains fixed at 67, and the PS and the Vooruit have entered government, as have Ecolo and Groen. And all have reneged on their electoral promises ”, affirmed the president of the radical left party, during the festival Manifesta organized this weekend in Ostend by the PTB and its organizations, the association Médecine pour le Peuple and the magazine Solidaire.

“In the past, people with a difficult job could take their early pension at 56 or 58 years old. This is over. It’s from the past. Minister Lalieux’s new pension plan makes people work longer. Almost all systems that allow an earlier shutdown are restricted or blocked. The minister is now saying that you should be able to retire at 60+ if you have a 42-year career. But having 42 years of work by the age of 60, hardly anyone makes it. You have to have started at 18, so you must not have studied, not have repeated a year, not have worked part-time and not have taken breaks for the children or to care for an elderly parent. So that doesn’t happen, ”added Mertens.

See also  González Laya states that if the respirators do not reach Spain, "Turkey must return the amount paid"

Three months to step up pressure on the government

The PTB wants the pension age to be lowered to 65 and that people who want to be entitled to early pension from age 60, after 35 years of career – which is not in the draft plan for pensions recently presented by Ms. Lalieux and which has drawn criticism from other members of the coalition in power at the federal level.

In his speech, Mr. Mertens also shot a few arrows at the attention of the separatists of the N-VA and Vlaams Belang: – the two main parties in Flanders – after the deadly floods in mid-July in Wallonia. “In the flooded cellars of Verviers, in the waters of the Vesdre, I saw the real Belgium, the Belgium from below. When we help each other, everyone speaks the same language. The language of the bucket which passes from hand to hand, and which says without words what everyone knows: that is solidarity, that is our country, ”said the president of the PTB-PvdA.

And to add: “a raindrop is federal until it hits the ground, then it becomes a Walloon or Flemish raindrop. Or Brussels. The separatists even split the raindrops. It is also because of that we did not warn of the floods in time. Let us make it so that the IRM can speak again about the floods and make water management a federal matter again ”.

Karine Lalieux: “Here is my reform for fairer pensions” Journalist at the General Editorial Board

Karine Lalieux is ready. The Pensions Minister has completed her proposals for the most important reform which concerns all citizens, whatever their age or status. Citizens who visibly no longer have confidence in the system, following successive reforms. “It is essential to restore confidence, hand in hand with the social partners,” said the socialist minister. “I want a reform marked by social justice, which supports employment, which is transparent, understandable for workers and which reduces inequalities between men and women”, she explains, ensuring that she has remained in the government agreement. . “