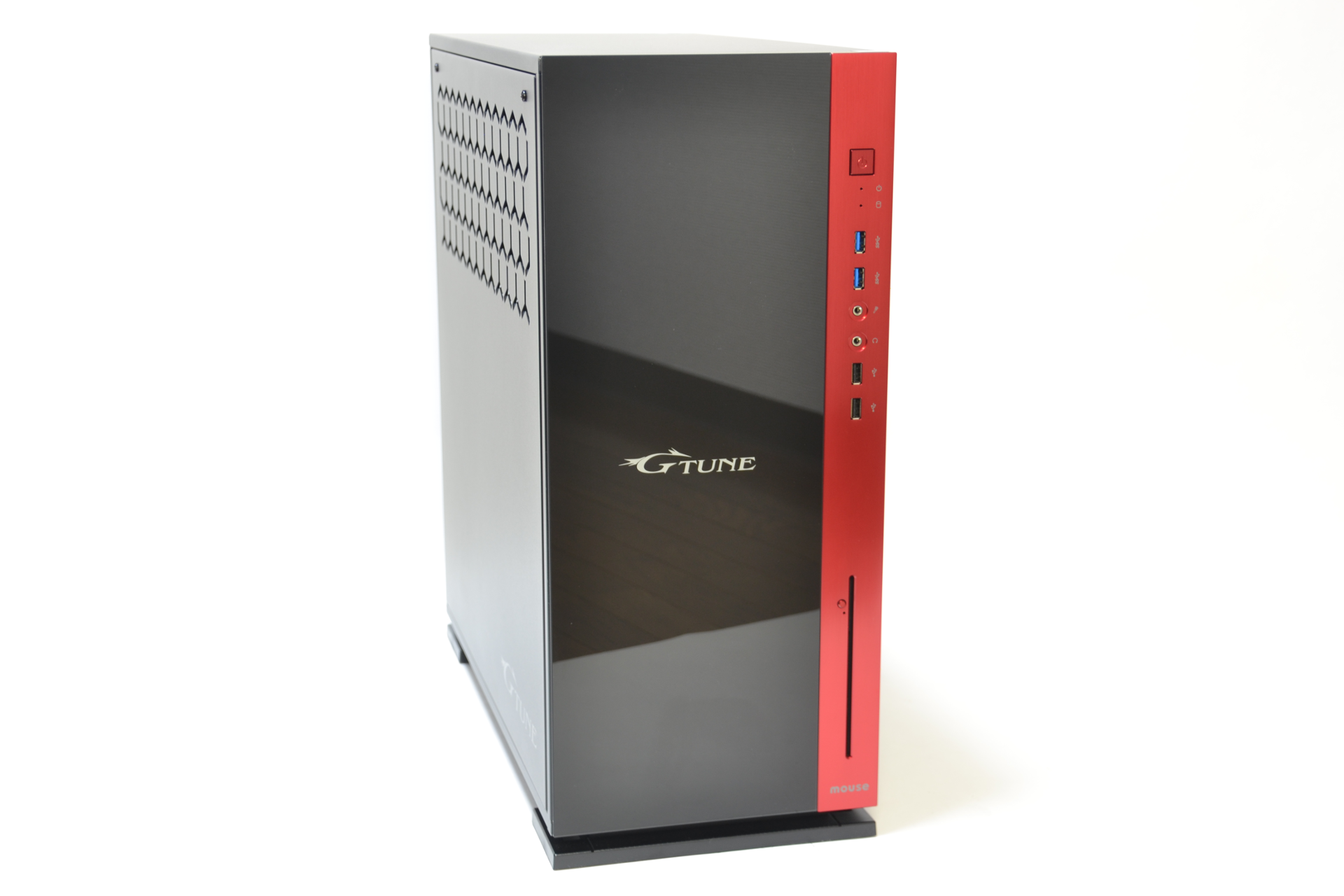 Are there any advantages of a full tower case?

The full tower type gaming PC “G-Tune HP-Z” has been released from the mouse computer gaming PC brand “G-Tune”. This machine is a gaming PC that uses a full tower type case with plenty of space inside. In addition to the high performance that uses high-performance parts, the specifications are luxurious in terms of power supply and cooling, and stability can be expected.

Gaming PCs with large housings are the royal road and are iron plate products, but many people may wonder if they need the size of a full tower. I would like to explore what G-Tune puts into this machine while touching the actual machine.

High-end machine that combines the latest CPU and GPU

The CPU is Core i9-11900K and the GPU is GeForce RTX 3080 Ti. Although the GPU has the GeForce RTX 3090 at the top, it can be said that it is almost a high-end machine that combines the latest parts.

The main memory is 32GB and the SSD is 1TB of M.2 NVMe, which is enough for gaming. In addition, it is equipped with a 4TB HDD and DVD Super Multi, and the storage area is generous. The wired LAN uses 2.5GBASE-T, which makes effective use of Internet lines over 1Gbps.

The power supply has a large capacity of 1,200 W, and 80 PLUS Gold products are used. In addition, water cooling is used for the CPU cooler. The radiator is as large as 360mm, and the Core i9-11900K with a TDP of 125W can be expected to operate stably and be quiet. It can be further customized to change to grease with higher thermal conductivity.

The price is quite expensive at over 400,000 yen, but considering the current situation that the GeForce RTX 3080 Ti is about 200,000 yen as a single item, it can not be helped. A summer sale with a 50,000 yen discount is being held for a limited time until September 1.

Of the parts used in this trial machine, parts that are not clearly specified in the spec sheet, such as video cards and storage, may be different in the actual product. Please understand in advance before viewing.

Looking at the game benchmark tests, all of them were the highest rated, except that they were “comfortable” at 4K (3,840 x 2,160 dots) in the “FINAL FANTASY XV WINDOWS EDITION Benchmark”. In FINAL FANTASY XIV: Akatsuki’s Finale Benchmark, the average frame rate in 4K is about 104 fps, and it is a realistic line to use the 4K high refresh rate display that has been increasing recently for light games. ..

The CPU that uses the 11th generation Core also gives a good score. In particular, the single thread is excellent, and it can be said that the Core i9-11900K, which goes up to 5.3GHz, is a remarkable achievement. It seems that it will be useful for purposes other than games.

As for the storage, ADATA’s “SX6000PNP” was used for SSD, and Seagate’s “ST4000DM004” was used for HDD. Sequential read is just over 2GB / s, which is a modest value for SSDs with M.2 NVMe connection these days, but random access is also fast enough. You can also customize it to Samsung SSD “SAMSUNG PM9A1” with PCIe 4.0 x4 connection.

Also, as a test of the actual gameplay, I tried one battle royale game of “Fortnite” and one tutorial lap of “Apex Legends”. Use NVIDIA FrameView for measurement and check the frame rate. The image quality is the highest setting.

In “Fortnite”, the average is 93fps at 4K, and even the bottom 99% is over 60fps. It can be said that it is a perfect play environment if it is a 4K / 60fps environment. In addition, the average is 222fps for full HD, and 148fps for the lower 99%, so you can fully utilize the high refresh rate display. Since it is the story with the highest image quality, it is possible to set the frame rate even higher.

In “Apex Legends”, the average frame rate exceeds 140fps regardless of the resolution, and it can be seen that it hits the game limit of 144fps in most situations. Even the bottom 99% exceeds 100fps, so it seems that you can enjoy playing on a 4K high refresh rate display. By the way, the GPU usage rate is 84% ​​at 4K and about 40% at full HD, so you can see that there is still some spare capacity.

Next, let’s look at the appearance. The 481mm high full tower case is almost entirely black, and features a red plate on the terminal on the right side of the front. The front panel is glossy and has a subdued color to give it a luxurious feel.

From the top, the terminals are a power button, power lamp, access lamp, USB 3.0 x 2, microphone terminal, headphone terminal, USB 2.0 x 2. Further below, a slot-in type DVD super multi drive is arranged vertically. I’d like to have a USB Type-C terminal on the front, but there is one on the back.

Honeycomb-shaped holes are drilled at the top on both the left and right sides, allowing air to enter and exit from either side. There are no holes on the front and top. The bottom is honeycomb-shaped with large holes and is covered with a dust-proof mesh cover. This mesh cover can be easily cleaned by removing it by pulling it out from the lower left of the housing.

The screw that opens the left side panel is at the top of the left side, not the back. You can see the inside by removing the screws and opening the panel. The inside of the case is completely painted in black, and the CPU cooler and video card are also unified in black as much as possible. By the way, this machine can be customized to change the left side panel to smoked glass.

Looking inside, the first thing to notice is the radiator attached to the top and the three 12cm fans lined up side by side. It’s as specs, but it’s a size that is quite intimidating. Whether or not you need something so huge, it’s a trick that you can do because you can afford the size of the case.

As for the airflow, one exhaust fan on the back and the video card exhaust toward the back. There is no intake fan, and the intake is from the bottom. Except for the CPU, which is cooled by a water cooling unit, the main heat source is a video card closer to the bottom, so it makes sense for airflow.

The fan faces the left side of the power supply, and the air is taken in the opposite direction to the radiator. If possible, it seems better to install it upside down and take in air from the right side.

In the vacant drive bay, there are only two places to install 2.5 inches from the left side as a sticker type. There is no tray-type drive bay that is easy to put on and take off, and there is little additional storage space for the full tower case. In particular, there is only one 3.5-inch bay and there is no space, so if you are planning to add an HDD later, 2.5-inch or external is a prerequisite.

The wiring is very clean when viewed from the left side. The layout is such that the backside wiring can be passed through in the shortest distance without being overwhelmed by the ample space. There is plenty of room around the video card, and there is a sense of security in terms of heat measures.

However, when viewed from the right side, there is a power supply behind the huge radiator at the top, and various wiring is folded and packed. Since the radiator itself is large enough, there should be no problem with cooling performance even if there are a few things that block the air flow, but since I am using a plug-in type power supply, I would like you to put it together a little smarter. The other parts are carefully wired.

When the left side panel is opened

As for the feeling of use, since the power buttons and terminals are lined up on the right side of the front, it is easier to use if it is installed on the left side. It also suits the convenience of airflow mentioned above. However, even if you want to put it on the right side, it is not particularly difficult to use.

As for the noise, when idle, the fan’s slow-moving sound can be heard faintly, and it can be seen that it is moving. At the author’s house, the sound of the air conditioner moving slowly is louder.

When the CPU load increases, the fan speed increases immediately for water cooling. Even so, the sound is low and quiet, so it doesn’t bother me when I use it for office work as well as games. In addition, there is almost no change in the sound even if it is continued for a long time, and the cooling power of the huge radiator is exhibited wonderfully.

Although the GPU makes a fan noise when a high load is applied, the volume is low due to the low wind noise, and the noise level is about the same as the CPU. No noise-avoidance headphones are needed at all, and late-night gameplay seems to be fine. In total, it can be said that it is a fairly low noise category for a gaming PC. It’s an amazing level considering the high performance.

It is the basis of a gaming PC to have ample cooling power in a huge case. However, recently, cooling of cases and parts has been well thought out, and the parts are quiet as a single unit, and many of the cases are small but make good airflow.

So where is the value of a classic full tower gaming PC? G-Tune’s answer is that by arranging a huge radiator that takes advantage of the size of the case and a video card with plenty of room, the cooling power is excessively increased to achieve both high performance and low noise … I felt that I was using this machine.

I personally want you to work harder on the internal airflow and wiring. However, the case and radiator are larger than necessary, so it shouldn’t be a problem in practice. You might be curious if you plan to access the inside many times later.

If you want a high-end PC and don’t have a problem with storage space, you should have a large housing. As compact PCs and notebook PCs are becoming more and more sophisticated, they are finished as one that clearly shows the standing position of large gaming PCs.

Jack Dorsey: the eccentric change of life and appearance of the millionaire co-founder of Twitter | TV and Show