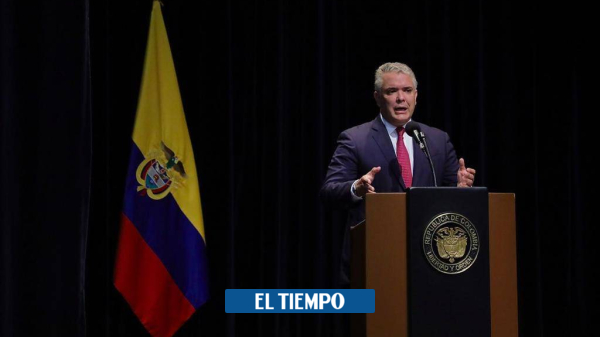 A growth in the approval of the administration of President Iván Duque and a reduction in the support of citizens for several mayors in the country revealed a survey carried out by Invamer and published in some media.

The survey was conducted between January 7 and 23 and measured, as usual, some key indicators, at a time when various parts of the country are experiencing an increase in the pandemic and there are some restrictions on mobility.

According to the figures, President Duque’s discharge went from 31 percent last October to 36 percent in January this year. His disapproval rating dropped from 61 percent three months ago to 59 percent.

In contrast, most of the measured capital city mayors fell in the same period.

Claudia López, the mayor of Bogotá, went from 71 percent in October to 61 percent in the January measurement, and her disapproval rose from 24 to 37 percent.

(In other news: How is Uribismo after the death of Carlos Holmes Trujillo?)

Support for the management of the mayor of Medellín, Daniel Quintero, dropped from 67 to 55 percent and disapproval went from 27 to 42 percent.

In the cases of López and Quintero, it should be said, there are processes of revocation of their mandates that are about to begin collecting signatures.

The steepest fall was the mayor of Cali, Jorge Iván Ospina, who reduced support for his administration by 27 points: it went from 65 percent in October to 38 percent in the recent measurement. His disapproval rose from 31 to 60 percent.

(You may be interested in: Can you be fired from your job if you don’t get vaccinated against covid?)

And the mayor of Bucaramanga, Juan Carlos Cárdenas, fell slightly from 56 to 53 percent in support of his work and rose one point in disapproval: from 38 to 39 percent.

The only one of the local leaders to be measured and who rose was the mayor of Barranquilla, Jaime Pumarejo, whom 73 percent of his countrymen continue to support.. In October it was 69 percent. Disapproval of Pumarejo dropped from 29 percent to 24 percent.

The percentage of people who believe things are getting worse also rose. In the case of Bogotá, it rose from 67 percent in October to 76 percent in the recent survey, while those who think that everything is improving went from 28 to 21 percent.

In Medellín, this indicator rose from 44 percent three months ago to 56 percent in January and the percentage of those who believe that things are improving fell from 49 to 34 percent.

See also  Why is the underworld aiming its arrows at Rutte? 'Since Wiersum and De Vries, everything is possible' - Trouw

The Farc name in politics is over: now the party is called Comunes
The keys to the arrival of Miguel Uribe Turbay to uribismoThey propose that there be a national day in memory of the victims of covid-19