Based on official public communications, the total number of health workers vaccinated with two doses was 261,435, which means 89.2% of the total number of workers, shows a study published on Friday. However, there are four strong indications that official data are incorrect in terms of the share of vaccinated health workers: Inconsistency of official communications; Data collected within the Platform for monitoring the impact of COVID-19 on health workers; The share of unvaccinated workers in this research. It indicates the existence of the error, without adequately reflecting its magnitude; Data obtained from other studies conducted in other states, which tend to confirm the information in the Platform.

The data in the table below show that we are in a situation of a continuous change of the officially communicated figures, being possible two variants:
– Either the number of those vaccinated is correct, but it always refers to a different total number of workers. This aspect was also notified to the CNCAV representatives, lacking the correct official information.
– Either the number of vaccinated workers and, obviously, their share are wrong 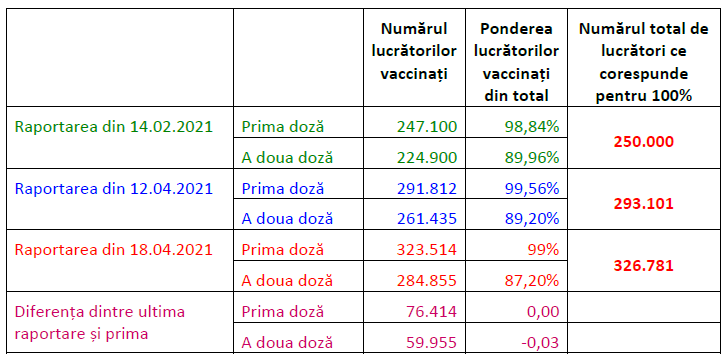 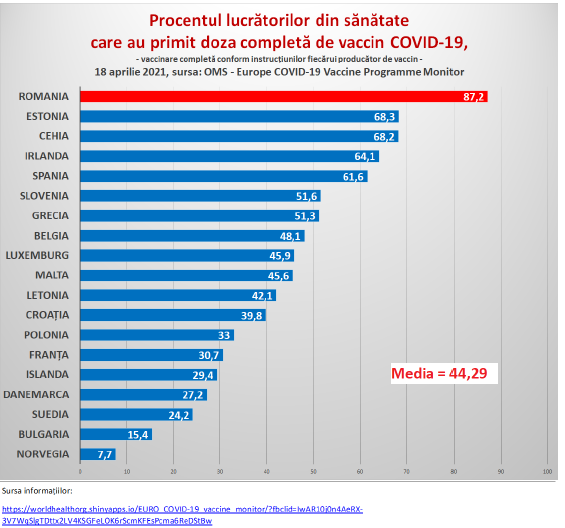 As can be seen with regard to vaccination with both doses, the distribution of percentages for the 15 countries that reported recorded a median of approx. 51.3%. It is true that the variation of the percentage distribution (between 15.4% and 100%) creates the possibility for Romania to be located on the right side of the line, at its extreme limit (almost 100%). However, the analysis of the data regarding Romania clearly highlights the errors of indication of the reference salary categories, increasing the probability of being located closer to the median.

See also  Everything ready for the vaccination of teachers, except in ...

The number of health workers vaccinated with at least one dose in Romania, existing in this report, respectively 323,514 exceeds by approx. 50,000 total number of health workers. In this case, the reference can be either the number of medical staff in all sectors of activity (for 2019 the INS indicates a total of 343,630), or the number of workers in the health and social care sectors (INS data for February 2021 indicates a total of 416247 workers) .15 The reporting error is obvious, its effects being reflected in the comparative analysis based on data from the World Health Organization, which also highlights the existence of anomalies.

The comparative analysis of vaccination in different states, conducted on the basis of data provided by WHO16 indicates that Romania would be in the top countries in terms of full vaccination of health workers, given that the average vaccination for these states is 44.29%. In order to argue the extraordinary situation of Romania, we need extraordinary arguments regarding the evolution of the vaccination campaign among health workers. If there are no such arguments then another is the explanation for this situation.

Data taken from the two sources indicate the following:
– The average provided by WHO data (44.29%) is very close to the data available on the COVID-19 Impact Monitoring Platform on health workers (43.42%).
– Compared to the data distribution, the probability is higher that Romania will be closer to the average than to the maximum limit of the data string.

– As the error regarding the number of health workers is obvious, the situation regarding Romania is not the one officially communicated.

An explanatory hypothesis concerns the general characteristics of some unvaccinated workers, such as a lower desire to get involved in actions such as those specific to completing the questionnaire. An additional indication in this regard is that the analysis of all responses, including incomplete ones (workers who did not complete the entire questionnaire, but only part of the questions) shows a percentage of unvaccinated of 25.06% (for 2370 respondents ). The difference between the share of unvaccinated respondents in the total responses and that in the complete responses indicates the possibility of retaining some of the unvaccinated respondents to answer questions that could identify the unit to which they belong.

Another explanatory hypothesis is the desire of unvaccinated workers to hide this status, which could be determined either by the possible consequences or by an embarrassment induced by public pressure in favor of vaccination.

The demographic distribution of respondents can also influence the results. We have in view the large share of females, many of them in the active period from a reproductive point of view, a situation that could justify additional concerns.

Distribution of answers to the question Are your colleagues vaccinated with SARS-CoV-2 / COVID-19? is an additional indication that 90% of vaccination of health workers is far from reality.

The correlation of data presented in the previous sections shows that the best estimate of the percentage of health workers fully vaccinated at present is that it is approx. 45% .19

See also  'It sounds sweet what we do, but it is precisely anti-social' - Wel.nl

Based on the indications from the analyzed data, we consider that the share of immunized health workers (through SARS-CoV-2 infection and / or vaccination) is higher than that of those vaccinated, this being a relevant indicator in the analysis of the level of protection of health workers. . Consequently, we believe that a paradigm shift is needed in the approach to the situation, based on the rigorous identification of the status of health workers related to SARS-CoV-2 infection, which also includes the possibility of establishing the existence or absence of a minimum level of immunization.

From a methodological point of view, it should be noted that official data do not include information on the number / share of health workers who have contraindications to vaccines. Open-ended answers to the question Please indicate the reason why you have not been vaccinated (the “other” option) provides a useful indication for estimating the share of unvaccinated workers for medical reasons. Along with the existence of post-infection immunity, the objective situation of some of the workers for whom vaccination is contraindicated must also be taken into account.