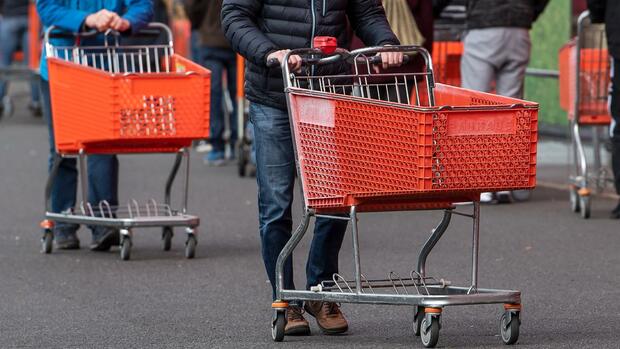 Dusseldorf In the worst recession in German post-war history in the winter of 2008/09, private consumption still proved to be a stabilizing factor. But what the German economy is experiencing right now is putting everything previously known in the economy in the shade.

Because the massive restrictions in everyday life that the government has put in place to curb the corona pandemic not only put pressure on overall economic production, they obviously also have a massive impact on private consumption.

This is signaled by the HDE consumption barometer for April, which fell 3.25 points compared to the previous month to now 96.66 points. For comparison: The biggest drop in a month so far was not even half as big at 1.45 points in September 2018.

The barometer has been calculated monthly by the Handelsblatt Research Institute for the HDE trade association since the beginning of 2017. It is based on a representative survey of consumers. It shows the current consumer mood, which will be reflected in private consumption over the next three months.

In the past few days, various economic researchers have outbid themselves with pessimistic forecasts. Federal Minister of Economics Peter Altmaier (CDU) admitted on Thursday that the cuts should be “at least as strong as in the financial year as a whole during the financial crisis” – in 2009 the German economy shrank by 5.7 percent. “We assume that in individual months in the first half of the year economic growth can drop by more than eight percent,” said Altmaier. “After ten years of economic growth, we will have a recession again this year. But this recession has to remain temporary. “

Hope to compensate for the loss of income

Conversely, consumers do not see a rapid recovery – on the contrary. Their economic expectations fell by 16 points in April, as a partial evaluation of the HDE barometer shows. The decline in individual income expectations and the propensity to buy was also noticeable, but significantly less. The majority of consumers apparently assume that they themselves will not be affected as much by the overall economic slump.

On the one hand, this could result from the fact that disposable income, for example from civil servants, pensioners and other transfer recipients, will not be affected in the short term by a recession.

In addition, many employees in the private sector can hope that the state will compensate for a large part of their loss of income, for example with short-time work benefits. In addition – as is quite common in crises – consumers’ propensity to save, short-term loss of income, apparently consumers want to compensate by releasing reserves or low savings rates.

Short-term winner of the corona shock is likely to be the food retail trade in addition to the mail order business. According to the latest data available for February, all retail sales were 6.4 percent in real terms than in the same month of the previous year. Sales of food, beverages and tobacco actually rose by 7.8 percent in real terms.
The outlook for the service sector, however, is bleak.

The seasonally adjusted IHS Markit Service Index for service providers’ business, released on Friday, dropped to 31.7 points in March after having reached 52.5 points in February, well above the growth threshold of 50 points.

The situation may worsen

This decline marked the sharpest slump since the survey was launched in June 1997. The previous record low of 41.3 points came from February 2009. Markit expert Phil Smith calls it “unprecedented”.

Nevertheless, the German economy generally appears to be somewhat more resilient than other large countries in the euro zone due to its low dependence on travel and tourism and consumer-related services.

The service index in Italy dropped to 17.4 points. But perhaps this is just a “foretaste of what the other countries will face as a result of increasing business closures and curfews and tighter controls,” warned Markit.

More: This is how the corona crisis affects trade, industry and commerce.

Quiz: are you an expert on the history of Euro football?