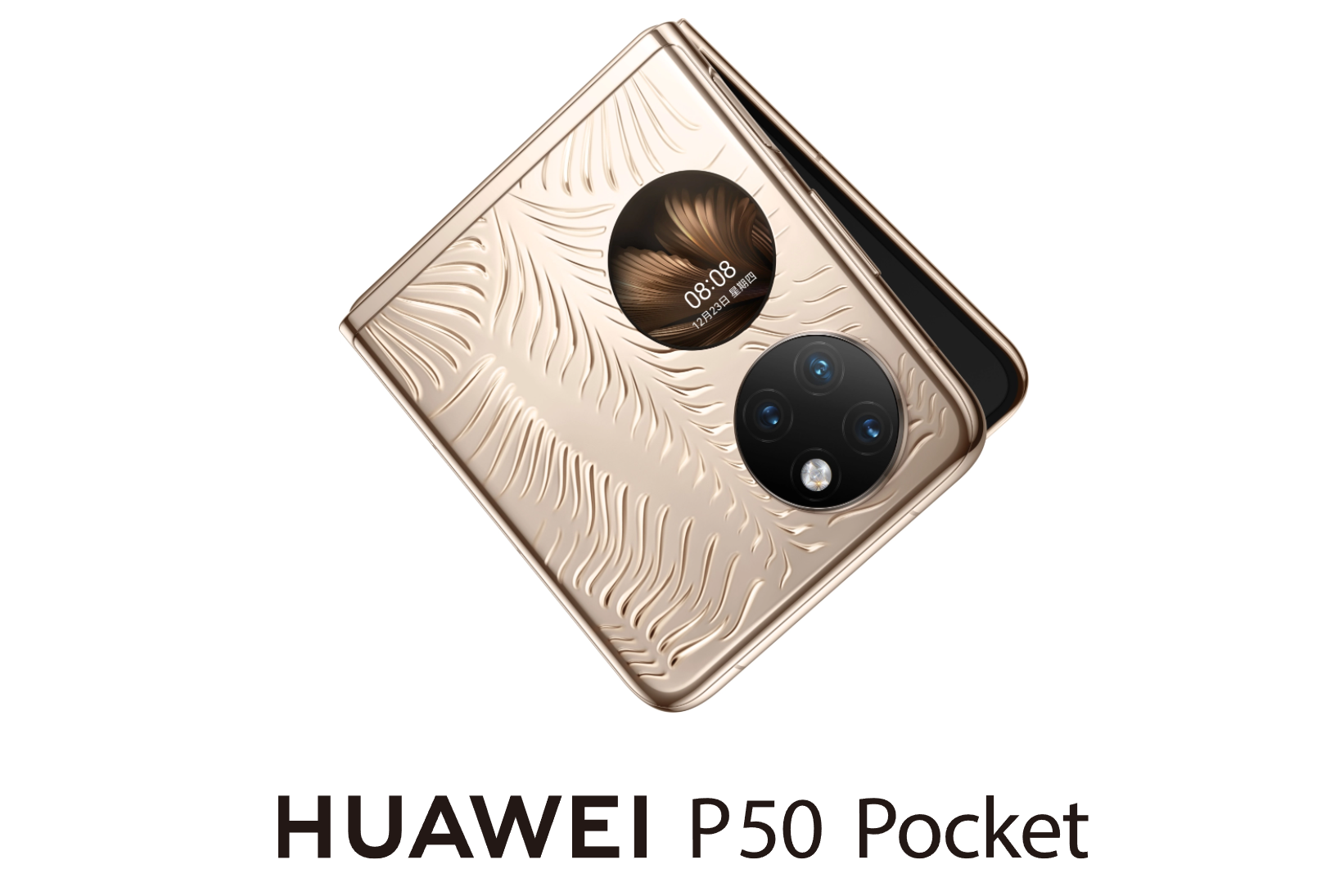 Huawei now has its first too Klapphandy presented: The Huawei P50 Pocket accommodates a 6.9 inch display in a smartphone that is just 8.7 cm long. The hardware and equipment are also impressive. The Huawei P50 Pocket is powered by the Snapdragon 888 4G, the battery is 4000mAh and is charged with up to 40 watts. For the triple rear camera, Huawei relies on high-resolution camera sensors.

The 6.9 inch AMOLED can be folded up without visible gaps or notches and offers a resolution of 2790 x 1188 pixels. A refresh rate of 120 Hertz is of course standard. A small highlight is also literally accommodated: there is a directly under the camera unit 1.04 inch round display built-in so that you don’t have to open the P50 Pocket every time.

Foldable is not really cheap: The device starts for 9000 yuan, the equivalent of around 1250 €, in China. So far there is no information about an international launch, but Huawei itself seems to be confident with a global version of the P50 Pocket. All current Huawei smartphones only have 4G and no Google services on board.

The Huawei P50 Pocket measures when folded 87,3 x 75,5 x 15,2mm and unfolded 170 x 75,5 x 7,2mm. It weighs in at 190 grams. Huawei had previously released three generations of the Mate X Foldable range. In contrast to the Mate X Foldable, “flip phones” are now a different type of foldable. The foldable display is not used here to enable a tablet-like size, but rather to reduce the size of the smartphone properly.

If so, then do it right: The Huawei P50 Pocket also appears as a premium version with an elaborately designed back in gold and with more memory. The prices for the three variants of the P50 Pocket:

The inner main display: When opened, the main display has a screen diagonal of 6.9 inches. It is an AMOLED panel with 120 Hertz refresh rate and a resolution of 2790 x 1188 pixels. This means that the Huawei P50 Pocket achieves a high pixel density of 439 pixels per inch. Like the Oppo Find N Foldable, the Huawei P50 Pocket folds up without a gap or curvature. The front camera is located in the middle of a punch-hole notch. 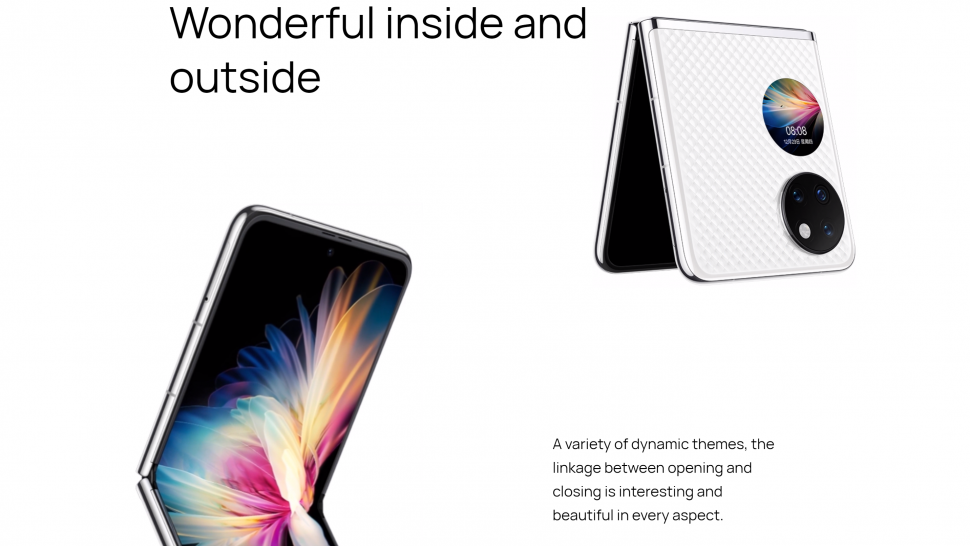 The outer display: The design of the Huawei P50 Pro with the two camera rings is taken up on the P50 Pocket with the second outer display. “Quasi a round Smartwatch” with a 1.04 inch AMOLED panel is installed directly under the triple cam. The display has a resolution of 340 x 340 pixels and thus achieves a pixel density of 329 pixels per inch.

The outer display offers a number of functions so that you don’t have to open the Huawei P50 Pocket for every action. Notifications or incoming calls are displayed, but also the weather, the calendar, media control, alarm clock, card management, mobile payment, … basically everything that can be done with the smartwatch.

The Huawei P50 Pocket is powered by the Snapdragon 888, but as a 4G version: The 5G version of the SD888 cannot be used due to the US ban. The Octa Core is manufactured in the 5nm process, has a fast Cortex-X1 Prime Core and the Adreno 660 GPU. 8 / 256GB or 12 / 512GB are available for storage. In addition, the storage space can be expanded by up to 256GB via an NM memory card. With the Huawei P50 Pro there was still the choice between the Snapdragon 888 4G and its own Kirin 9000. Here are the benchmark results of the P50 Pro compared to the competition:

Your own system comes as a system Harmony OS 2 from Huawei used and how you know it, the Google services are missing.

Huawei has installed a different triple camera in the P50 Pocket than in the flagship models: a “Hyperspectral” sensor with 32MP – with the P50 Pro still as a “black and white” camera with 40MP – supports color recording. A zoom camera, on the other hand, is completely deleted. The following sensors are installed compared to the high-end device, the Huawei P50 Pro:

5G is not supported, but the following 4G / LTE frequencies:

This means that the smartphone could theoretically also be used in this country in the 4G network without restrictions. The other connectivity standards are up to date. These include WiFi 6, Bluetooth 5.2 with LDAC support for high-quality audio transmission and NFC for mobile payments. The services Dual-GPS, A-GPS, GLONASS, Triple-BeiDou, Dual-Galileo, Dual-QZSS and NavIC are used for navigation. The P50 Pocket is biometrically unlocked via the fingerprint sensor, which is located in the power button, or via Face Unlock with the front or main camera.

There is not much space left for the battery with the small size of the smartphone. There is only one in the Huawei P50 Pocket 4000mAh large battery installed. However, this can be charged with up to 40 watts via USB-C via Huawei Super Charge.

Our assessment of the Huawei P50 Pocket 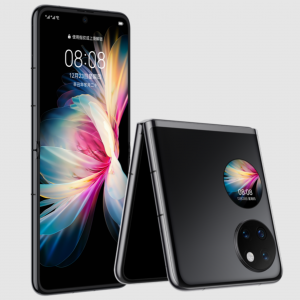 Even if the Huawei P50 Pocket is named after the high-end device or the flagship generation, it does not share the equipment with them. The restrictions imposed by the US ban also make it difficult for the P50 Pocket on the market.

In the category of modern clamshell phones, we already have prominent representatives like that Motorola Razr 5G or to a certain extent the top dog, that Samsung Galaxy Z Flip 3. As always, Huawei has one major shortcoming, because hardly anyone does without 5G, especially in China. Importing is definitely not recommended.

Thailand and Vietnam Are Still the Best in ASEAN