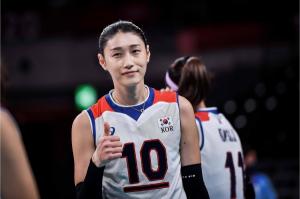 ‘Bread Sister’ Kim Yeon-kyung has been selected as a model for SPC Group’s bakery brand.

SPC Group announced on the 27th that bakery brands Paris Baguette and SPC Samlip have selected Kim Yeon-kyung, a world-class volleyball player, as a model at the 2020 Tokyo Olympics.

Unlike the charisma that overwhelms the crowd on the volleyball court, Kim Yeon-kyung is nicknamed ‘Bread Sister’ for her friendly and easy-going charms.

In actual online communities and SNS, various contents including Paris Baguette uniforms and composite images were uploaded, and voices of longing continued.

Paris Baguette and SPC Samlip selected Kim Yeon-kyung as their actual brand model to repay the fans’ enthusiastic support, and plan to shoot advertisements and introduce products named after the players in the future.

An official from SPC Group said, “We decided to select this model as a model to share with customers the energy and positive synergy that Yeon-kyung Kim showed on the court during the last Olympics. We will continue to have fun communication with consumers.”