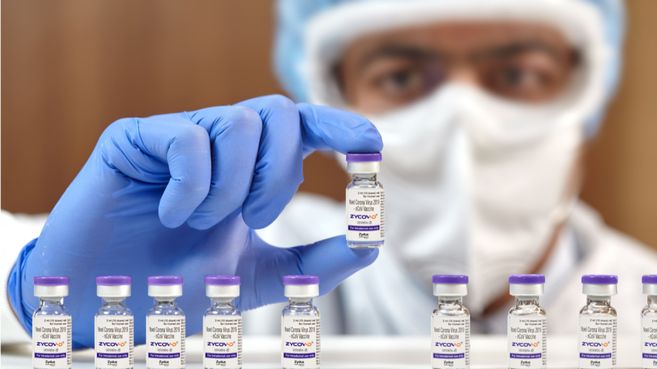 It is the ZyCoV-D, developed by the pharmaceutical company Zydus Cadilla. It takes three doses, but is injected with shorter needles that only reach the skin. Since DNA is more stable than RNA, it does not require such extreme freezing for storage. That’s how it works.

A few months ago the world was surprised by the development of the first messenger RNA (mRNA) vaccines: those from Pfizer and Moderna, which are already being applied against COVID-19. Now India has just approved the first DNA vaccine: ZyCoV-D, which also uses shorter syringes, since it only needs to be injected into the skin, is more stable and promises to open new doors to science. How to understand what this is all about? (We recommend: Herd immunity: an idea that needs to be rethought?)

Before the coronavirus, in a way, the vaccines that reigned in the industry were those of the inactivated virus. Measles, rubella and mumps, to give a few examples, have traditionally been fought with vaccines of this type. But with COVID-19, an innovation that followed began to gain places on the podium: that of using parts of the genetic code of the virus that one wants to fight to stimulate the response of the immune system. Both the mRNA and DNA vaccines use this principle.

Among the former are those developed by Pfizer and Moderna. But, despite the fact that in several countries clinical trials and with various diseases with DNA vaccines were being carried out, India gave it the first go-ahead. ZyCoV-D, as it was baptized, is produced by the pharmaceutical company Zydus Cadila, it is of three doses, requires a shorter syringe and has, according to its creators, an effectiveness of 67% in symptomatic COVID-19 and 100% in the moderate coronavirus once the scheme is completed. How does it work?

For this we have to go back to the textbooks a bit. The first thing researchers do is take RNA from a part of the virus. RNA is something like the recipe book of genetics, since there are the instructions for making proteins. Specifically, the RNA that is taken is where the recipe is to generate the “spike” protein, which is the key for the virus to grab onto human cells and enter them. (You can read more news about vaccines and coronavirus here)

Once the RNA that sequences the spike protein is extracted, it is inserted into a circular DNA that, in genetics, is known as a plasmid, which has the ability to produce many copies in bacteria, which makes it easier than a vaccine can be produced on a large scale. According to the Colombian María del Pilar Lemos, Ph.D. in Immunology from the University of Pennsylvania and part of the global team in charge of evaluating coronavirus vaccines, circular DNA is more stable than double helix DNA, which we have been taught lifetime. “Vaccine DNA is short and easier to organize into a circular plasmid for transport and stability,” he explains.

This circular DNA, or plasmid, is what is applied to the body, but, unlike other vaccines, which must be injected into the muscle, in this case it is enough to put them on the skin. “DNA vaccines are injected into the first layers of the skin. Some must use a special device that provides a small electrical current, which helps the DNA reach the nucleus of the cells, “he adds.

Once in the nucleus, the information of the circular DNA is copied to make mRNA that, remember, only has the recipe to make the spike protein, so it will be the only part of the virus capable of producing. The mRNA then travels to the cytoplasm of the cell and creates some spike proteins. The immune system then recognizes that there are parts of the virus in the body and produces antibodies. (You may be interested: Colombia will receive 4 million vaccines from Moderna this month, Minsalud reported)

“The DNA of the vaccine eventually degrades and stops producing proteins, but with those days of production, the immune system is trained to recognize them,” says Lemos.

But why think of a DNA vaccine when there are mRNA vaccines that seem to start the process a few steps later? Is it possible and correct to compare them? An important point that differentiates them, according to Lemos, is that DNA is much more stable than RNA, so it does not need such strict storage requirements, such as extremely low temperature. “This is key for the distribution of vaccines in places where it is difficult to maintain the cold chain, there is no constant electricity or where it is impossible to maintain sub-arctic freezers for storage,” he explains. In terms of effectiveness, it is more difficult to think about comparing them. “The ZyCoV-D vaccine, for example, was tested during the delta peak, the most contagious variant that we know of so far. Those of RNA were tested prior to the appearance of this variant ”.

But the truth is that the pandemic has taught us the advantages of having different types of vaccines. “This is a really important step forward in the fight to defeat COVID-19 globally, because it shows that we have another class of vaccines that we can use,” Peter Richmond, a pediatric immunologist at the University of Western Australia in Perth, told the journal Nature.

In fact, according to the World Health Organization (WHO), currently, in addition to ZyCoV-D, there are ten more DNA vaccines in clinical trials to combat the coronavirus. The two most advanced are INO-2800 from Inovio (United States) and AG0302-COVID19 from Anges and Osaka University (Japan), both of which are in phase 2/3.

Although DNA vaccine trials had already been underway for some years, and were even approved for veterinary use, it is a new door that COVID-19 opened to science. Not only has it sought to combat viruses with DNA vaccines, on the list are also diseases such as autoimmune diabetes, malaria, hepatitis B and C, and some types of cancer, such as prostate cancer. The new DNA vaccine against the coronavirus began to mark a new path.