After a year of interruption due to the Covid-19 pandemic, François-Michel Le Tourneau returned to Guyana for a new mission with illegal miners. This time he talks to us about the “Internet revolution” which is gaining in the heart of the forest and the Internet café business which flourishes there, “a clever mix of high-tech, resourcefulness and absolute precariousness”.

After a year of fasting due to Covid-19, I was finally able to find the ground and carry out a new mission with the illegal miners in Guyana, the prospectors. Coming back to the field after having published a summary work is always dangerous… What if I suddenly came across elements that would bring down or call into question the assumptions made? What if, in the end, I didn’t understand anything?

Fortunately, the artisanal miners were kind in showing themselves equal to anyone I had met before. Certainly, technical innovations or details have come to complete the image I have tried to give in my book. But the relationships between the different parts of what I call the “system gold miner Were again confirmed, bringing their share of additional testimony on a condition most often chosen, and not suffered, although the result may be immensely different from one individual to another.

Even in the middle of the forest, we keep in touch!

I was thus shown a video of a woman from the region who is now the owner of an agri-food business in Brazil, bought with the kilos of gold she mined. Fate finally smiled on him after a long period of bad luck and his fortune was made in just a few months last summer. But a short time later I spoke with another, who had come to Guyana seven years ago to pay debts contracted in Brazil with a stockbroker. Desperate for the possibility of finally seeing the wheel turn in her favor, she no longer saw ” as a shadow of myself when I look at myself in the mirror », « locked in a prison that I built myself … nobody forced me … ».

The luck factor is inherent in the world of gold panning and the fact that some or some will succeed and others not is a rule accepted by all. But, of course, everyone also has the secret hope that they will be among the winners. In the video sent to his home and shot on the Oyapock, a young man about to enter Guyana says: “ Here I am almost entered Guyana… God willing, in six or seven months, I will be back… sewn in gold! ».

The Covid-19 has affected the gold washing regions, of course. But, apparently, no serious case was noted in the area where we visited. The prospectors even came to the conclusion – which would probably not pass the sieve of the scientific council led by Pr Delfraissy – that ” this disease, it is weaker in the forest “. At the same time, watching the news from Brazil and the doomsday situation in Manaus on TV, many preferred to stay put and postpone their home travel plans until next year. Yet they remain in constant contact with their families and friends. Magic of the forest? Heavy use of radio stations, which for so long have been the crossroads of communications between prospectors with Brazil? No ! The Internet revolution has arrived in the forest!

The existence of such systems had been mentioned since 2019, but I had never seen one in action. However, for several months, it is fever. Sniffing out a new one business, shopkeepers (marreters or marreters) have started. They bought the equipment, signed the subscriptions with operators like Mobilsat or Viasat, took away generators or solar panels and opened Internet cafes in the forest. Thanks to a wifi router, to which they control access with a Tether-type application, they allow everyone to connect with their smartphone (these have been ubiquitous in the forest for many years) and to exchange messages. with his friends and relatives. WhatsApp and Facebook are the most popular services…

Aerial in the middle of the forest, using the gap in the river.

Of course all of this comes at a price. ” At the beginning we won well … One of them confides. At 1 gram of gold per hour (around 55 euros at the current rate), we understand the comment! But the crude capitalism that characterizes the panning quickly played. Competition has set in and establishments have multiplied. Five in one of the villages visited, in an area which should have 200 to 300 people. Suddenly the prices have fallen. Today the prices are 1 gram per day and 12 grams per month… Always much more than a subscription Triple play in France, but much less than at the start. 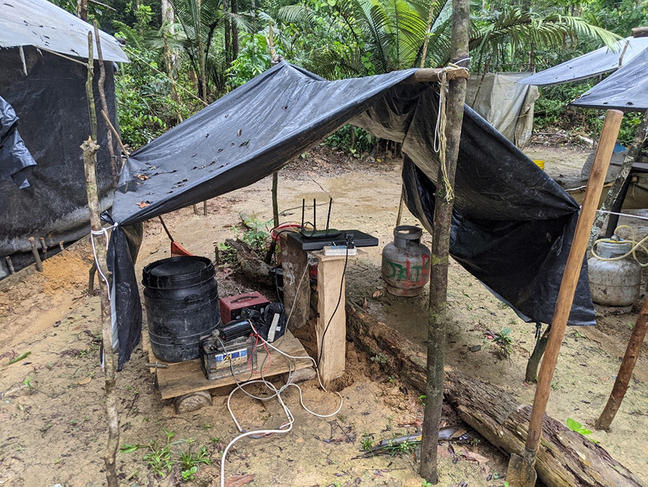 Under these conditions, the only solution to remain profitable – always capitalist – is to invest to build customer loyalty and push the competition to bankruptcy. You need software that allows you to finely point the antenna to maximize bandwidth and latest generation gaming routers to provide a smooth connection to as many consumers as possible. Internet commerce has become an arms race. A new profession has appeared in the world of panning : satellite Internet technician, with a salary of 8 grams per day of work… On the other hand, the radio stations which had already declined well are now condemned in the very short term.

The ability to easily access the Internet changes the pace of life in the corutelles (support villages for gold washing sites). If the fans of the soap opera used to spend the early evening in front of the television to follow the adventures of their favorite characters, most of them prospectors went to bed early (not everyone has the light at home), or else, when they were in the background, gathered in the cabarets that serve as drinking places (and also brothels) for good parties watered. But today many gather around the cybercafé after their work day, for an hour or two of surfing the Net. We take news, send selfies, exchange gossip: ” look at such a speaker up to the eyes! » ; « yes, dad will be back soon !! » ; « Do you really think I should go to Roraima? Is there really a lot of gold out there? “, Etc. This is the end of domino evenings or the MP3 player repeating for hours the only three or four songs it contains … 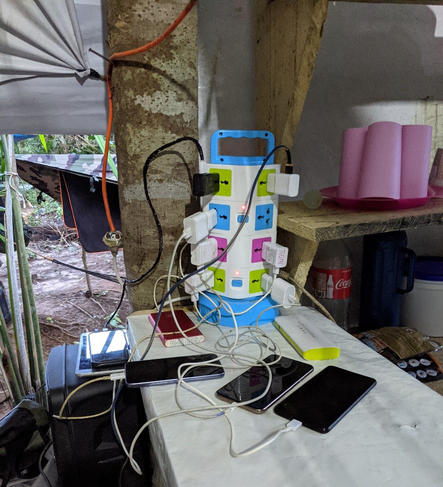 The Cybercafé must also provide enough to recharge the phones …

This new possibility of communication is of course used for business. It is infinitely easier to do without news, orders, alerts … The men and women of the panning, often illiterate, have a particular preference for WhatsApp audios, which they see as a very effective form of communication. But the atmosphere of the evenings is most often family. The Internet is the missing link between their roots in Brazil and their presence in the forest. And, given the success, the connections will obviously multiply. It is likely that, in a short time, the workers will make the presence of wifi a condition for choosing the camps and sites in which they will want to work, as was already the case for TV and the possibility of watching the matches of football… 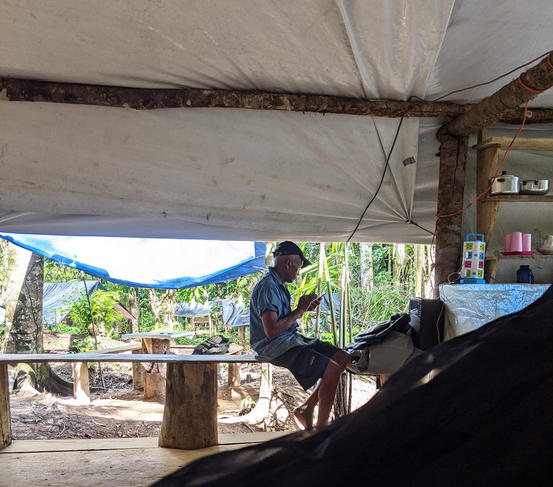 Everyone takes advantage of the service to exchange news, keep in touch with their family or do business.

Despite all this modernity, we must not forget that all this takes place in the heart of the Guyanese forest, in supposedly uninhabited areas, hundreds of kilometers from the road network or official towns. The cybercafés are covered with a thin plastic sheet which protects them more or less from the rainy season, the electricity comes from small portable groups, the equipment can at any time be camouflaged in caches to avoid its destruction by operations fight against illegal gold panning… Following the example of all panning, these systems are a clever mix of high-tech, resourcefulness and absolute precariousness.

All around we hear the chorus of evening insects, howler monkeys or even the decreasing rhythm of the engine of an approaching canoe: the forest, and all this universe disconnected from the urban world that the “terrain” had always represented. for me. Till today. But where do you have to go now to escape e-mail? ♦