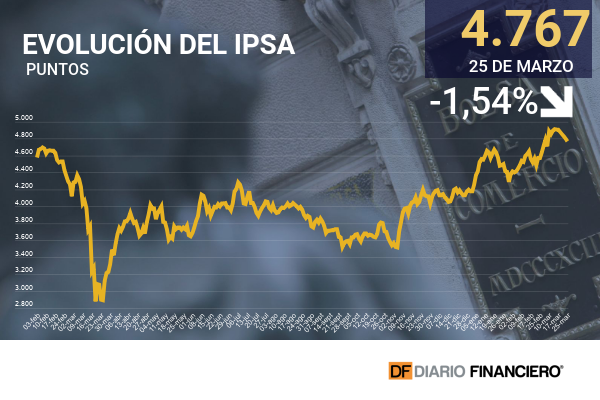 The Ministry of Health reported in a new balance sheet that the entire Metropolitan Region will fall back to Phase 1, which brought the national index to 4,767 points with a fall of 1.54%.

Wall Street took hold on Thursday after the Labor Department reported that the country’s gross domestic product (GDP) grew 4.3% during the fourth quarter of 2020, surpassing the 4.1% previously anticipated by the market.

Furthermore, it was revealed that weekly jobless claims dropped to 684,000 last week, marking a new step for the recovery of the labor market, being the lowest figure since the arrival of Covid-19.

“It’s a very confusing stock market, there is no real leadership. One day cyclicals are in favor, the next day tech-plus is in favor. But on the bright side, there is no what I call pushy selling.” Inverness Counsel’s chief investment strategist in New York, Tim Ghriskey, told Reuters.

On the other hand, oil continues to rise with the huge ship stranded in the Suez Canal, which according to the salvage company, could stay there for several weeks. Faced with the concern of shortages, the price of Brent crude has risen 0.11% to US $ 61.78 a barrel, while the WTI, on the contrary, has fallen 2.84% with a barrel at US $ 58.34.

The IPSA closed this Thursday at 4,767 points with a fall of 1.54% in the Santiago Stock Exchange, after the Ministry of Health announced 7,023 new cases of Covid-19 and the implementation of a total quarantine throughout the Metropolitan Region as of this Saturday.

Although they affirmed that to date more than 3 million people have completed their vaccination, the number of PCR tests in the last 24 hours have increased to 70,922, with an occupancy of critical beds greater than 95%.

“It is important for the population to understand that we are experiencing a worrying situation. That is why we ask the inhabitants of Chile to become involved, we all have responsibilities to fulfill with respect to the pandemic and more than ever we must take care of ourselves “, mentioned the Minister of Health, Enrique Paris.

“The impact (on the stock market) will depend on how long the measure lasts. There is a certain fright in investors because this type of measures envisions a worse local situation and impacts on the country’s economy “, explained the rental operator at Vector Capital, Jorge Tolosa, to DF, assuring that the sector most affected will be retail due to the closure of its operations.

While, copper ended the day with a 2.61% drop that placed it at US $ 3,846 per pound on the London Metal Exchange, thus losing the floor of US $ 4. On the other hand, the dollar in Chile was above $ 725, after Standard and Poor’s (S&P) lowered Chile’s credit rating, anticipating “weaker” finances due to the pandemic. .

In Europe, the coronavirus continues to be a trigger for the stock market given the uncertainty of new restrictions in the region by the European Union (EU), which raised the possibility of blocking the export of vaccines to eurozone countries with inoculation rates higher like Britain.

“The decision to limit the flow (of vaccines) could seriously hamper the UK’s reopening schedule. Being clearly far ahead of the EU nations in the vaccination campaign, there is a real risk that politicians like Angela Merkel will push for action to be taken as their popularity declines, “warned IG Senior Market Analyst Joshua Mahony.

In Asia, Chinese investors remain under pressure by the new law to be implemented by the US Securities and Exchange Commission (SEC), to remove from the list foreign companies that do not comply with the expected standards, such as naming each Chinese Communist Party official who is a member of the board of directors of an entity.

Some analysts argue that The main concern of Chinese firms is that if they comply with US regulations and disclose information about company-affiliated names, they would also be violating Chinese law.

“It is quite difficult for China to open the accounting of all US-listed companies to US regulatory agencies, especially for some publicly traded companies that involve national security or national data,” Everbright strategist Sun Hung told Reuters. Kai, Kenny Ng.

Rocket League Sideswipe is coming to iOS and Android in 2021