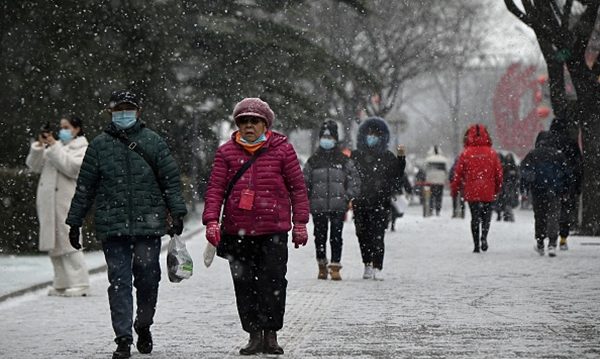 [The Epoch Times, January 21, 2022](The Epoch Times reporter Li Yun interviewed and reported) A global survey report shows that the trust of the CCP government ranks first in the world. Many Chinese people pointed out that this is an international joke, because The credibility of the CCP has long since gone bankrupt.

On January 18, the executives of Edelman International Public Relations stated at the launch of the 2022 Edelman Trust Barometer report, “In the blue ranks of trustworthy countries, not a single country is a democracy.”

The executive said that the poll was conducted by means of questionnaires, sending at least 1,150 questionnaire samples to people in 28 countries around the world, and conducting statistical analysis on the recovered results.

The results show that Chinese respondents’ trust in the Chinese government is 91%, an increase of 9 percentage points from last year; while public trust in the government in democracies does not rise but declines, with the largest decline in Germany, followed by Australia, Netherlands and America.

In response, Dong Guangping, a former public security and pro-democracy activist in mainland China, questioned the procedure of the investigation.

“It is difficult to say whether the CCP paid for this investigation.” Dong Guangping pointed out, but it is certain that this kind of investigation has no reference value at all.

Dong Guangping said, “There is an essential difference between an authoritarian country and a democratic country. The Chinese do not have the right to speak freely, and all information channels are blocked. In the case of unequal sources of information, this kind of survey cannot represent the views of the Chinese people. ”

Lu Min: The government’s credibility has long since gone bankrupt

Jing Chu, a mainland online writer, also told The Epoch Times, “I heard the results of such polls as an international joke. The credibility of the party-state has long since gone bankrupt, and it is an indisputable fact that their trust is declining.”

Jing Chu questioned, “It is estimated that this is the result of the polls given by the Central Propaganda Department. The party-state is more and more spurned and hated by the common people. They never speak human words, but only tell lies and clichés. Coins use international companies to hide their ears.”

“You go to the street and see, everyone is scolding the Communist Party, and it says that the trust of the party-state has increased?! In my opinion, it’s just an international joke.” Jing Chu said, “A bunch of corrupt people, ordinary people. Will there still be trust in it? If it is an international and fair investigation, this cannot be the result!”

Wu Tianli, a citizen of Beijing, said that she herself has been imprisoned twice because of her speech. The credibility of local governments has long since gone bankrupt. “As a Chinese public, if you have not been deceived by the government all your life, you can say that you are not Chinese.”

Jing Chu said: “Now more and more people are awakening, the Communist Party wants to build a Great Firewall and can’t wait to cover the eyes and ears of the common people, so that you can’t see or hear, and let them call the deer a horse and confuse black and white.”

He said, “Those who dare to tell the truth, those who point out that a deer is a deer and a horse is a horse, are sent to prison by the Communist Party. The Communist Party is combining ignorance and imprisonment.” Really want to test the Chinese people’s trust in the government degree and let people freely choose whether they want to stay in the country or go to a democratic country.

Mainland human rights defender Zhang Jianping also told The Epoch Times that Edelman’s poll conclusion is not surprising. If you go back to the Mao era, the polls would be higher. Especially in the three years from 1959 to 1961, when tens of millions of Chinese starved to death, the poll may be 100%. It depends on which angle you look at the problem.

“You have to go to a higher poll in North Korea, including in the era of dictator Saddam Hussein. The poll estimates may be 100%. But that doesn’t mean much, and it doesn’t make any sense,” Zhang Jianping said.

“Because this poll does not measure the level of civilization of a country, nor does it show that the people of this country can live with dignity, and can obtain the freedom of speech and assembly granted by the Constitution; nor can it show that citizens are free from terror and life. The right to health and property rights are not violated.”

See also  Choose BUMN shares with a good outlook in 2022

Zhang Jianping said: “If a country has democracy, the rule of law, human rights, and modern political civilization, the government is under the supervision of the people, and the property of officials can be disclosed, then it will be a fair and just poll.”

He said foreign agencies would also get the same results when they went to China to investigate. When former US President Richard Nixon visited China in 1972, the people could not get enough to eat. During the interview, reporters also saw that people had sewing machines and bicycles in their homes. That is to say, it’s all posing.

Yu Ping, the former China director of the American Bar Association’s Rule of Law Project, also told VOA that this poll reminded him of Harvard’s Ash Center. In a poll released in 2020, the Chinese people are 93% satisfied with the government.

Yu Ping said that the CCP prohibits foreigners from conducting polls in the country, “even if approved by China, it must be conducted under the supervision of the authorities. And this report fails to explain these processes clearly, credible and with the West. World comparability is questionable.”

Exchange rate: Price of the dollar in Peru during the morning of today, January 21