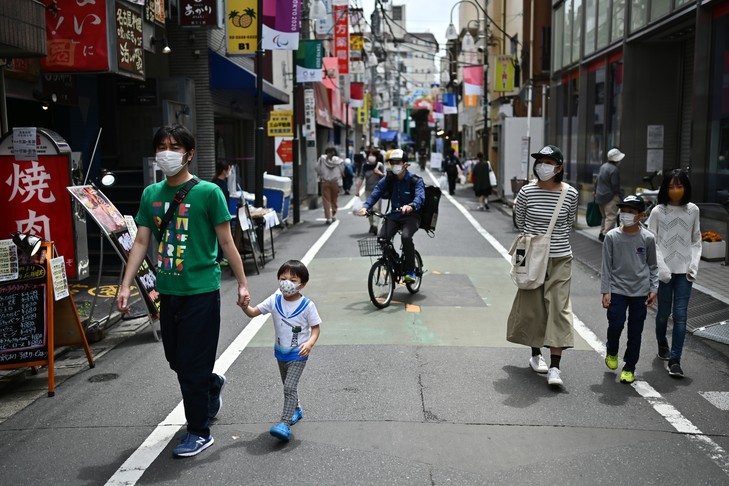 If the Japanese executive can declare a state of emergency in the midst of a coronavirus pandemic, it has no power to make it binding. Which means no fines, no police control to enforce containment. A consequence of the very strict constitution of 1945, which aimed to prevent the country from plunging back into authoritarian power. In Japan, social distancing is therefore only indicative.

Voices were raised on the archipelago to cast doubt on the official figures for cases of contamination and deaths, on which depended the thorny question of holding or postponing the Olympic Games next summer. The number of infected people can be largely underestimated when few tests are carried out.

So how does Japan manage to limit contamination? Valérie Niquet, head of the “Asia Pole” at the Foundation for Strategic Research (FRS), offers several hypotheses. First, confinement which, even if it is not restrictive, is rather respected by the population: ” The goal was to reduce contacts by 80%. We are not far “, Says the researcher.

Then, official recommendations advised to avoid the three risk factors of contagion: ” closed areas without ventilation, areas with a lot of people, and areas where there is a lot of talk ” The goal is to try to never find yourself in places that combine these three risk factors, such as the interior of a crowded restaurant.

Another explanatory factor: the state of health of the population. ” In Japan, there are very few obese or diabetic people. While they are the ones most likely to be worried ” According to Valérie Niquet, “ the traditional mode of behavior in Japan ” also play, “We don’t touch each other, we don’t talk in the metro, the people are extremely clean, and almost all the doors are automatic. “

→ READ. Seen from Japan: the mask, a sign of respect for others

And to recall that in its history, Japan has been much less subject to epidemics, for example cholera, than Europe. Finally, the wearing of masks has become part of Japanese customs for years.

Official communication on the defensive

For the moment the archipelago seems to have rather succeeded in stemming the pandemic, but the situation can always change. Partly because of the small number of beds equipped with breathing apparatus. But above all, the Japanese government has been widely criticized for its chaotic communication around the crisis. ” Shinzo Abe, who does not otherwise enjoy wild popularity, was the subject of much mockery because he wanted to offer two masks per household, without knowing how many people there were. “

The Prime Minister was also criticized because of a video posted on Twitter where he is seen reading at home with his dog and drinking tea, while the period is synonymous with serious economic hardship for many.

→ THE FACTS. Coronavirus, the Japanese cruise turns into a nightmare in Yokohama

” Japanese officials remain on the defensive In dealing with this crisis, continues Valérie Niquet. ” For example, they recently published a study to show that they had done their best in the management of the Diamond Princess », This ocean liner on which the virus had spread off the Japanese coast. And remain, for the moment, “ saved by the very low death rate Of the virus in the country.

How hairdressers work under corona restrictions

Coronavirus crisis. At the moment, there is no wave of business bankruptcies