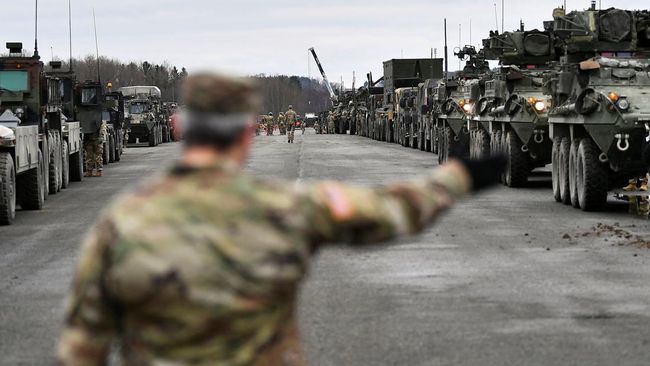 Jakarta, CNBC Indonesia – The United States (US) sent thousands of troops to the Philippines. The two of them started a massive war drill, which was named Balikatan or means “shoulder to shoulder” in Tagalog which started Monday (28/3/2022).

The war games were attended by nearly 9,000 soldiers from the navy to the air force. The US alone deployed 5,100 military personnel.

The drill will reportedly cover direct fire maneuvers, aircraft strikes, urban warfare and landings. Its location is in the Northern Philippines near the sea border with Taiwan.

“The US Military and the Armed Forces of the Philippines will train together to expand and advance shared tactics, techniques and procedures that strengthen our response capabilities and readiness for real-world challenges,” US 3rd Marine Division General Commander Jay Bargeron said. from Associated Press (AP)Tuesday.

“Our alliance remains a major source of strength and stability in the Indo-Pacific region,” he added.

Balikatan was first conducted in 1991. It was based on the 1951 Mutual Defense Treaty, which bound the US and the Philippines to help each other in the event of an attack.

“The treaty alliance formally expresses our sense of unity and determination to defend each other against external armed attacks, so that no potential aggressor gets the impression that one of them stands alone,” he explained.

Meanwhile, some maneuvers will also be carried out in the western Philippine island province of Palawan. The area faces the South China Sea (SCS) which is disputed with China.

China has so far claimed almost the entire South China Sea. That is about 90% which covers an area of ​​about 3.5 million square kilometers (1.4 million square miles), with the concept of a nine-dash line.

The unilateral territorial claims overlap with the claims of several ASEAN countries and Taiwan. Apart from China, the South China Sea is bordered by Brunei Darussalam, Cambodia, Indonesia, Malaysia, the Philippines, Singapore, Taiwan, Thailand and Vietnam.

It is not yet known how China’s comments regarding the military exercises scheduled to end April 8 will be made. The AP writes that China is unlikely to like this because it is so close to territory it claims both Taiwan and the South China Sea.

With the Digital Markets Act, a serious rein in of the Internet giants in Europe

3 million cigarettes seized in a smuggling shed in Auvelais: the “workers” slept there