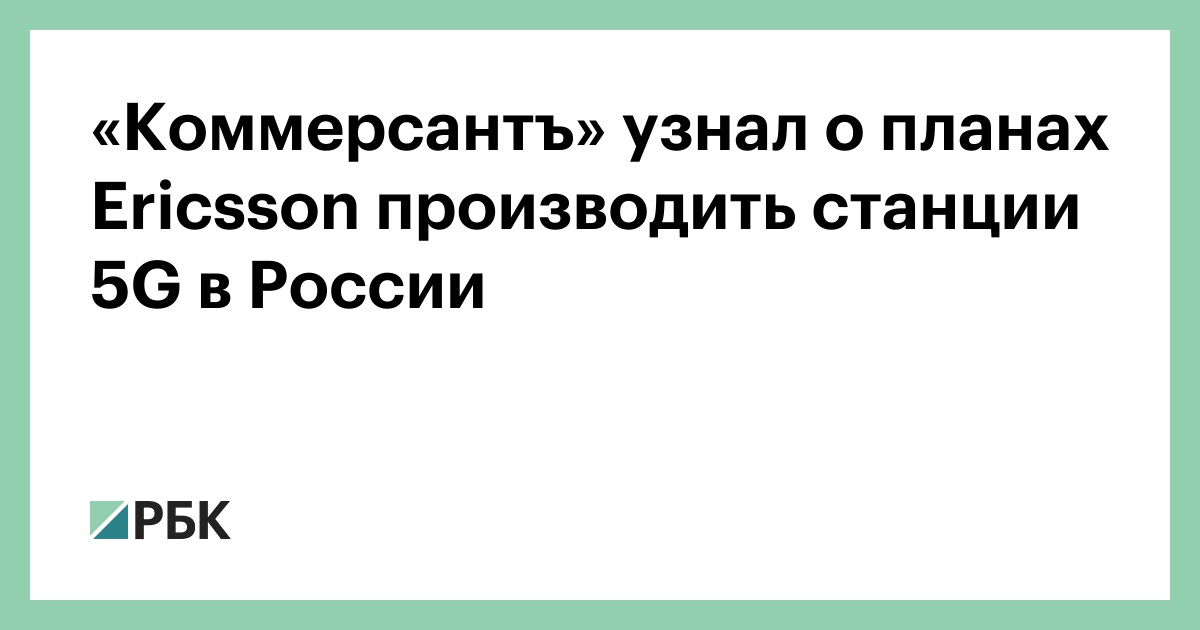 Ericsson is one of four large companies from which domestic telecom operators are now purchasing equipment for base stations. In addition to the Swedish company, the suppliers of such equipment are the Chinese companies Huawei and ZTE, as well as Nokia, Kommersant wrote earlier.

As the newspaper notes, foreign companies became interested in the opportunity to localize production in Russia after the meeting of the Commission on Radio Frequencies on August 2, which decided to extend licenses to telecom operators to use frequencies for LTE (4G), but on condition that from 2023 they will use domestic equipment, including those produced at joint ventures with foreign companies.

Nokia has already started localizing production: the Finnish company signed an agreement of intent with the Russian computer equipment manufacturer Yadro (part of IKS Holding). The companies agreed to start production of 4G and 5G base stations using Nokia technologies in Russia. It is planned to deploy it at a plant under construction in Dubna.

The idea to localize the production of base stations is now being analyzed by the Chinese ZTE: according to its vice-president in Russia, Tigran Poghosyan, the company collects information on the potential volume of the base station market for the next five to ten years and only after that will it be able to talk about concrete steps towards localizing production …

Huawei refused to talk to Kommersant about plans to localize the production of base stations in Russia. However, according to the newspaper’s sources, at the meetings in the government, a scenario was discussed in which MTS Elektronika LLC could become Huawei’s partner, but the company did not express an “unequivocal position” regarding its localization plans during the negotiations.

In November 2020, a government commission approved a roadmap for the development of 5G networks in Russia. According to the document, by 2024 at least ten million-plus cities should have fifth-generation networks deployed using domestic equipment.

By this time, capital investments in 5G should amount to 152 billion rubles, and the number of users – 5 million people. By 2030, these figures should rise to 241 billion rubles. and 50 million people. It is also planned to launch 20 projects in key sectors of the economy on the basis of the fifth generation network by this time.

In March, the country’s first pilot 5G network appeared at 14 locations in Moscow. The network is not available to all users, but only to some of the clients of the MTS network operator, who are automatically selected based on their movements.

Selected subscribers will receive an SMS message inviting them to connect to the pilot network by activating the “Access to 5G” option, after which the owners of devices supporting 5G can use unlimited Internet speeds up to 1.5 Gbps for free. Smartphones supporting the band n79 standard in the 4.4-5.0 GHz band will be able to operate in the 5G network.

In June, the first pilot 5G user networks were launched in St. Petersburg by MTS and MegaFon.