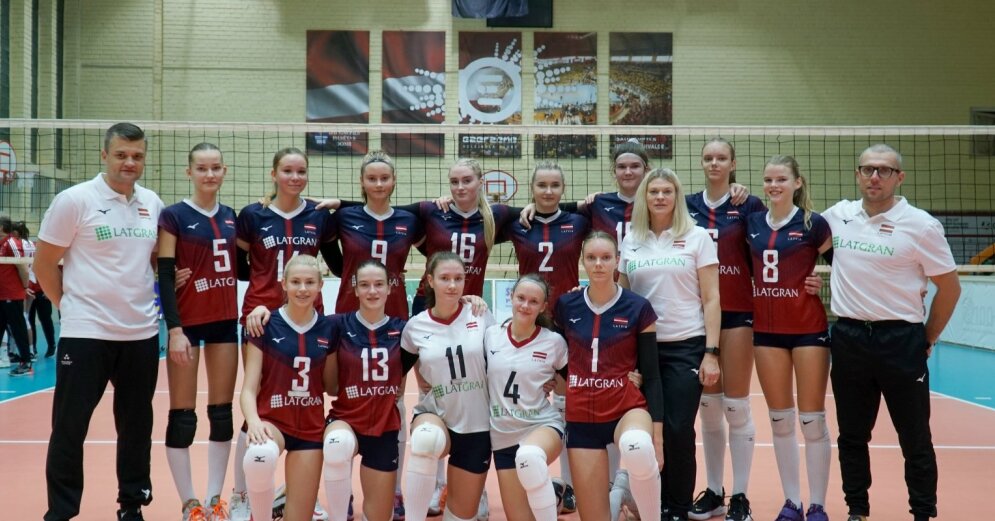 The first qualifying tournament of the European U-17 Girls’ Championship in volleyball started today at the Daugavpils Children and Youth Sports School, where the Latvian national team with a 0-3 award recognized the superiority of Poland. In the first round of the qualifying tournament of the European U-18 Boys’ Championship in Yerevan, the capital of Armenia, the young volleyball players of Latvia lost to the Belarus national team with 0-3.

Kristers Landzāns stood out with 21 points in the Latvian national team, while Timurs Aisens and Armands Rokjāns added eight and six, respectively. Vladislav Palachan was the most productive among Belarusians (22). The outcome of the fight was largely determined by the superiority of the opponents in the attacks.

National teams from seven countries are participating in Yerevan – Latvia, Armenia, Belarus, Estonia, Russia, Poland and Ukraine. In the first round tournament, you must win at least sixth place to qualify for the second round qualifier. The final tournament of the European U-18 Boys Championship with 12 teams will take place in July 2022 in the Georgian capital Tbilisi.

The Latvian girls’ team trained by Ieva Nechiporuka in Daugavpils will try to win at least the third place in the group to enter the second round of the European U-17 Championship qualification tournament.

Latvian girls are in one group with Poland, Belarus and Lithuania, but in the other group Estonia, Georgia, Russia and Ukraine are fighting. In each of the groups, the teams will play a round tournament. On the last day of the tournament, the teams that won the first, second, third and fourth places, respectively, will meet in the mutual games, determining the distribution of places. The best team will qualify for the EC final, but the second to sixth place winners will earn a ticket to the second round of the European Championship qualifiers.

The main set of Latvia and Poland was dominated by the main favorites of the group, so our volleyball players had to make concessions – 6:25. In the second set, after a threatening start (0: 7), the hosts recovered a bit and eventually lost with 12:25. In the third set, the housewives further improved their performance and achieved equalization (5: 5), held their dignity (11:13 and 13:16), but continued to increase their dominance (15:24). Serving Alexander Timber, our volleyball players scored several points in a row, in the end the result was solid – 19:25.

Līva Ēbere and Anete Čelnova scored eight and seven points, respectively, in favor of the Latvian national team, while Olīvija Jaronis (12) turned out to be the most productive in Poland.

“There was a little excitement, but we received it because we realized that there was nothing to be afraid of,” said Aleksandra Timbere, the captain of the Latvian national team, after the match, who lists the elements that definitely need to be improved. “It could definitely be a defense, you could immediately see that it fits us. We also definitely need to improve the service, because we know that the opponents are definitely preparing.”

The competition taking place in Daugavpils is at the same time the championship of the Eastern European Volleyball Association (EEVZA), which takes place in a “bubble” environment without spectators. The final tournament of the European U-17 Girls’ Championship with 12 teams will take place in July 2022 in the Czech cities of Olomouc and Prostejov.