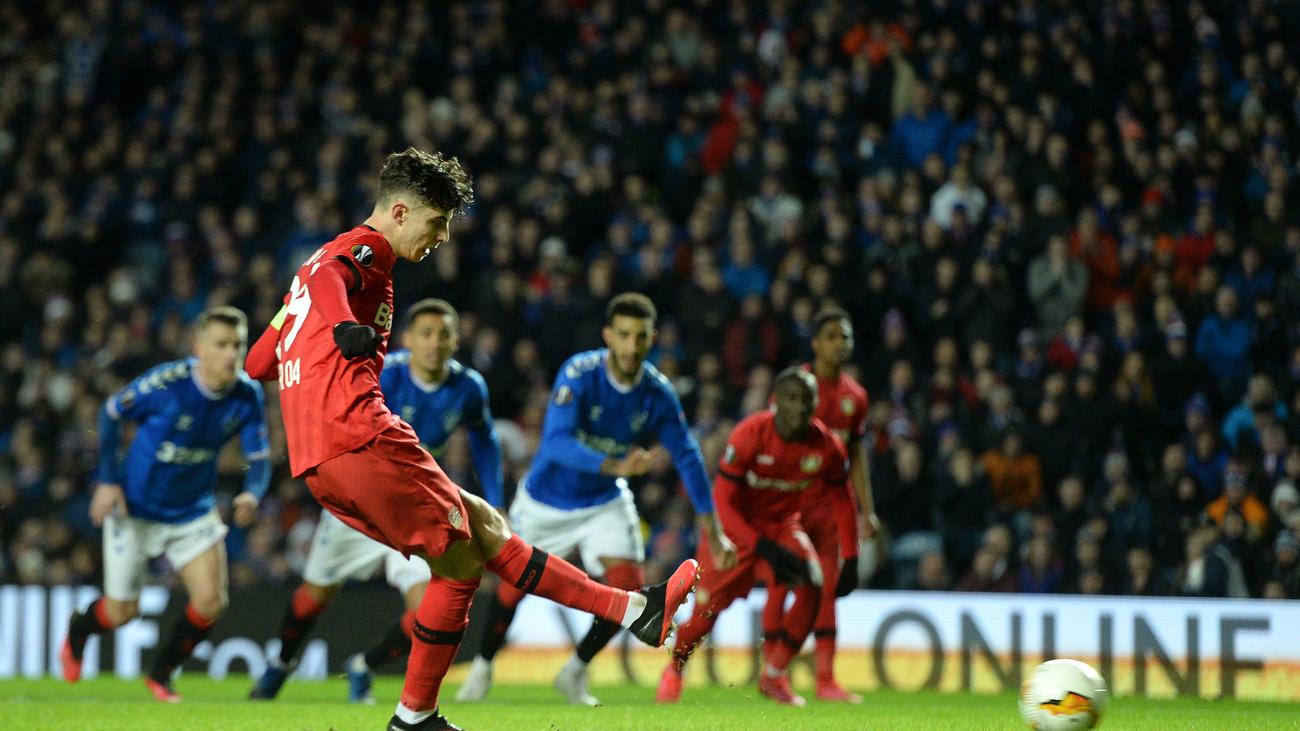 With a 3: 1 (1: 0) against the Glasgow Rangers Bayer Leverkusen was the only German team that was successful in the first leg of the Europa League round of 16. With attacks by Karim Bellarabi and Kai Havertz, the Werkself dominated the first half hour of the game but failed to score. It was only when the referee penalized a handball from George Edmundson with a penalty kick that Havertz could lead his team into the lead with a penalty goal (37.).

In the second half, the Rangers initially played more aggressively and faster than in the first half, Alfredo Morelos provided a strong shot in the 54th minute for the strongest scene of the home team. Leverkusen goalkeeper Lukáš Hrádecký prevented a equalizer. Instead, Charles Aránguiz scored 2-0 for Leverkusen after a cross by Moussa Diaby in the 67th minute. Edmundson reduced the lead to 1: 2 in the 75th minute when he struck a header from a corner from James Tavernier. The decision came shortly before the end: Leon Bailey scored the 3-1 and thus the final result of the game after a pass from Diaby. With three away goals, Bayer is well placed to: Round of 16 to reach.

Vfl Wolfsburg lost the first leg in the round of 16 of the Europa League 1: 2 (0: 1) against Shakhtar Donetsk. In the early minutes, Wolfsburg seemed to be the stronger team. But in the 16th minute, Júnior Moraes scored the leading goal for Donetsk after a cross from Ismaily. In the 22nd minute, the guests also got a chance to 2: 0, but Viktor Kovalenko missed the penalty that followed a handball from Maximilian Arnold: Wolfsburg goalkeeper Koen Casteels held his shot. Until the break, the balance of power finally changed: While Shakhtar initially limited himself to defending after the opening goal, at the end of the half they were the more offensive team with more possession of the ball.

In the 2nd minute of injury time in the first half of the game, it was Wout Weghorst from Vfl Wolfsburg who missed a penalty. It was the first game in the Europa League in which both teams missed a penalty in the first half. In the 48th minute, John Anthony Brooks scored the 1-1 goal for Wolfsburg after a corner from Josip Brekalo. After a long period of balanced play, the guests regained the lead: Marcos Antônio scored 2-1 for Donetsk (73.) after a ball rebounded on the crossbar. but which was prevented by the low-lying players from Donetsk.

Eintracht Frankfurt lost 0: 3 (0: 1) to FC Basel in front of empty ranks. This threatens the Frankfurt club’s end in the round of 16 of the Europa League. Except for a shot by Sebastian Rode in the 8th minute, which narrowly touched the post, the home team could not show any offensive actions. Eintracht was also not up to the Basel defense, which seemed very stable.

In the 27th minute, Samuele Campo then scored 1-0 for FC Basel. With a direct free kick he hit from 20 meters and put his team in the lead. In the 43rd minute, Silvan Widmer narrowly failed with his header attempt.

In the 52nd minute André Silva came to the shot, but the ball landed over the goal of the Basler. Gonçalo Paciência (57.) and Almamy Touré (65.) also tried to score the goal, but also failed. Instead, Kevin Bua increased the lead of the visiting team with a lob from a counter movement to two goals (73.). In the 85th minute Fabian Frei scored 3-0 for FC Basel and thus the final result.