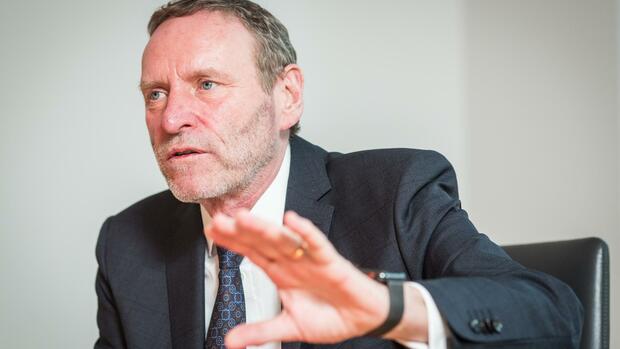 Frankfurt Sparkasse President Helmut Schleweis raises the alarm. Many companies in need of help in the corona crisis could not access the support programs of the federal and state governments, he warns in the Handelsblatt interview. “Some companies will not be able to help with the existing funding programs.”

As part of the loan program of the state development bank KfW, only those companies could be granted loans that are expected to be able to repay the loan within five years, said Schleweis. “This is currently not the case for many companies from industries that are suffering particularly badly from the corona crisis.”

Companies that are very much dependent on current sales and have low reserves are particularly affected. These included companies from the areas of gastronomy, hotels, event management, catering as well as from the sectors of travel, traffic, logistics, tourism and aviation.

These companies often do not get promotional loans, “even though they have a working business model if the economy starts up again after the corona crisis,” said Schleweis. “Because, unlike many manufacturing companies, they cannot make up for the lost sales in the crisis. After all, you can only rent a hotel bed once per night. ”

If such companies are not to fall through the cracks, Schleweis believes that politicians will have to take additional measures. “For such companies, help other than loans is needed to bridge the corona crisis,” says Schleweis. “Direct grants from the state would be conceivable.” Another option would be 100 percent guarantees for loans that would only have to be repaid in the very distant future. The state currently assumes 80 to 90 percent of liability as part of the KfW loan program.

The word of the DSGV boss has weight. The 378 savings banks are market leaders in business with small and medium-sized companies in Germany. At the end of last year, the institutes had granted loans of € 444 billion to companies and € 364 billion to private individuals.

Mr. Schleweis, many companies are facing existential difficulties due to the corona crisis. 20 percent of German companies even fear bankruptcy. How big is your customers’ need?
The savings banks have received around 300,000 inquiries from corporate customers in the wake of the corona crisis. In about half of the cases, we were able to find an initial solution together with the companies.

Are companies particularly concerned about the federal and state funding programs?
This impression sometimes arises in public, but is still premature. So far, it has mostly been about dealing with existing loans. In many cases, the savings banks have suspended repayments and interest payments on loans for several months. In addition, thousands of companies have drawn on their existing lines of credit, securing additional liquidity. But of course we also talk to customers about government support programs.

As part of a KfW special loan program, the state assumes 80 to 90 percent of the liability, depending on the size of the company. The interest rate is also cheaper. The funds are applied for, processed and paid out via the house bank. What experiences have the savings banks made with this program so far?
Most companies know that they are dealing with loan programs here, i.e. the funds have to be repaid. Many companies are therefore still considering whether the program fits their needs and will first discuss the situation with their tax advisor. An example of a savings bank that I spoke to recently: It received 850 inquiries from companies, but so far only ten specific loan applications to KfW. The situation is similar for many other houses.

Why is there so little interest?
The KfW program was finalized just a week ago. I am certain that the number of loan applications for the various federal and state funding programs will increase exponentially. But it is also clear that some companies will not be able to help with the existing funding programs.

Berlin’s Senator for Economic Affairs Ramona Pop has called on the banks to be more committed to combating the consequences of Corona. “You can take a risk of ten percent in the books,” she says.
One thing must be clear to everyone who expresses himself politically these days: KfW and most of the state development institutes have launched credit programs. Grants are only given to the self-employed and small businesses. This means that customary banking standards and a credit and risk assessment by the house bank are mandatory. The house bank’s risk assessment must relate to 100 percent of the loan volume and not only to a liability share of ten or 20 percent. If we do not do this properly within the framework of the funding guidelines, KfW will refuse to accept liability. Not everyone who currently makes public statements seems to be aware of this.

Which industries are you referring to?
When it comes to gastronomy, hotels, event management, catering as well as in the travel, transport, logistics, tourism and aviation sectors, many companies make a living from their ongoing sales, and the margins are relatively low. Such companies often also have relatively little reserves. These companies often have problems with existing credit programs, even though they have a working business model when the economy starts up again after the corona crisis. In contrast to many manufacturing companies, they cannot make up for the lost sales in the crisis. You can only rent a hotel bed once per night.

What can you do to help such companies?
You have to see a problem: the easiest way for companies to get promotional loans that they need the least. The companies that are currently most in need of help are often not suitable for promotional credit programs. Assistance other than credit is needed for such companies to bridge the corona crisis. Direct government grants would be conceivable. Another option would be 100 percent guarantees for loans that will only have to be repaid in the very distant future.

Some bank representatives have had intensive discussions with KfW and politicians as to whether the state should assume 100 percent of the liability for aid loans. Would that be a solution?
With a state liability of 100 percent, we would no longer talk about a normal credit process, we would almost be in the area of ​​benefits. That can be an option. There, however, one would then have to free the house banks from the tight shackles of normal lending processes. 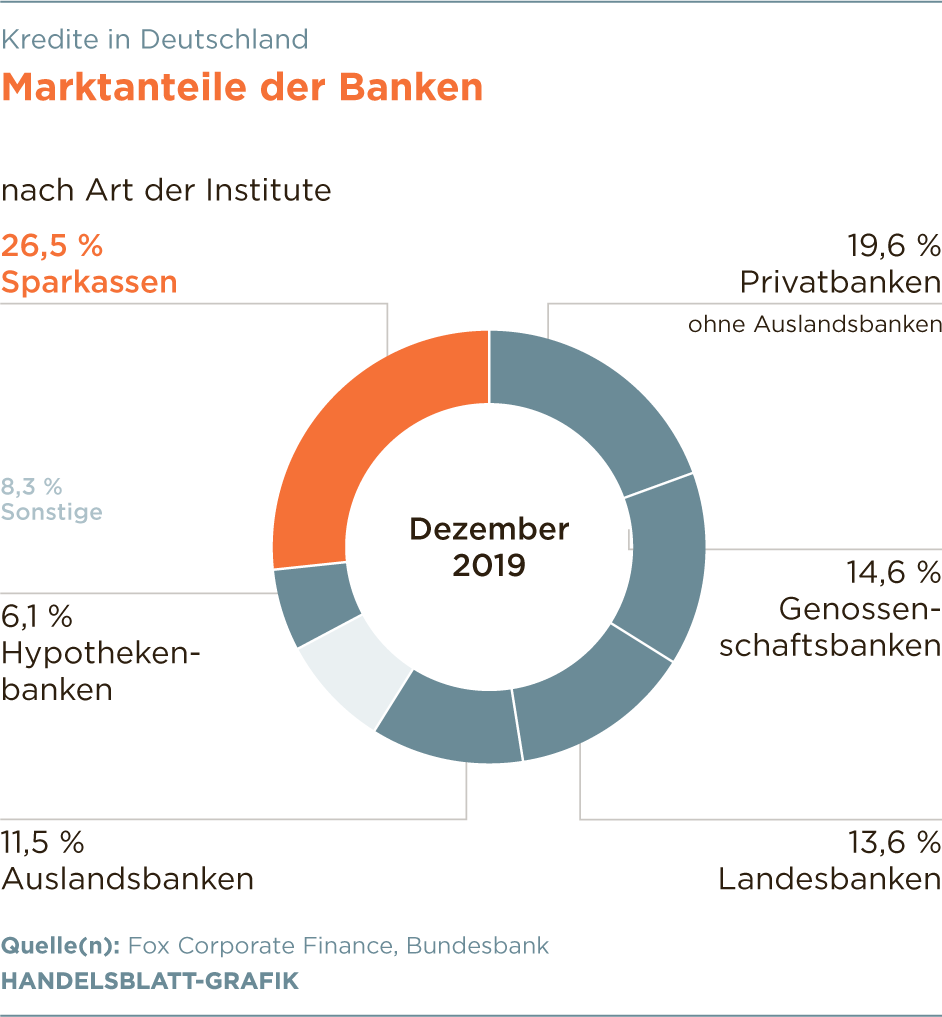 Some family entrepreneurs criticize the fact that they should be liable for a promotional loan with their private assets, including their home and old-age provision. Can’t banks foresee this in the corona crisis?
Obviously, some understood political communication so that the state was responsible for everything. That’s not the case. The state promotional institutes require the house banks for promotional loans that they comply with banking standards. For this reason, joint liability by entrepreneurs, for example, is not an idea of ​​the house banks, but standard lending standards customary in the industry.

Direct state aid, which does not have to be repaid, is available for small businesses and so-called solo self-employed. How does this program work?
The whole thing is regulated at the level of the federal states and works very differently. In Bavaria, Baden-Württemberg or Brandenburg, for example, it works extremely well. Funding institutes in individual federal states, on the other hand, were not yet structurally adequately prepared for the flood of applications. However, we expect that there will be reworking there in the next few days and that the solo self-employed nationwide will receive uncomplicated money.

How do the savings banks handle the grants?
As soon as we have a confirmation from the responsible state authority, we pay out the money unbureaucratically. We will ensure that government grants are not offset against possible arrears at the savings banks. They are therefore fully available to customers. We are currently working flat out to ensure this is technically ensured.

Many private customers are also facing financial difficulties as a result of the corona crisis. How do you deal with that?
The savings banks have been offering private customers to suspend loan repayments since March 26. This applies to installment loans as well as real estate financing. The prerequisite is that Corona has lost revenue and customers cannot pay otherwise. We trust our customers that they will not use this instrument inappropriately. Customers only have to answer two questions online with one click. To date – Monday morning – 124,000 people have made use of this opportunity. For many it is a great relief.

The association of PSD banks has demanded that politicians should not only help self-employed people with non-repayable grants, but also private individuals and families. What do you make of it?
The more people stay on their wages, the less financial worries they have to worry about. Stabilizing the economy and businesses must therefore be a priority. Anyway, I want to say that the programs of German politics are right and unprecedented. If there are still problems in parts, this does not change their correctness. Then you have to readjust quickly.

Companies react differently to the crisis. Adidas, puma, HM and Deichmann have announced that they will suspend rental payments in the corona crisis. Are there similar considerations at the savings banks?
Suspend rent payments – at savings banks? (laughs) I think that’s out of the question. Political emergency measures are always aimed at those in our society who are currently unable to help themselves. I think it is impossible if this is interpreted as an invitation not to stand by the commitments that have been made. Social responsibility and solidarity at this time means doing what you can do yourself.

How high will the savings for the savings banks be from the corona crisis?
One cannot judge that seriously at the moment. The savings banks have used the past good ten years to increase their pension reserves and thus be prepared for difficult times. We need this cushion now and can do what we are there for even in a crisis: help our customers.

Should, in times of crisis, do savings banks have to accept red numbers in order to help companies?
It is not our goal to be in the red, but it cannot be ruled out. We are in a situation where we learn exponentially every day and have to reassess the situation again and again.

The situation in the savings bank sector was tense even before the corona crisis. Now the burden of the corona crisis is added. Many reform efforts, such as the creation of a central institute, have been put on ice for now. How bad is the savings bank sector?
Now is not the time to take care of our internal structures. Now our customers need our help – that and only that has priority. Employees are currently extremely active – in the branches that are still open, in the home office and sometimes with parallel childcare. And the feeling of togetherness in the Sparkassen family is impressive. However, we will not arrive in the same world from which we started after the crisis. It’s going to be tough, but I’m sure we’ll defeat the corona virus. After that, we will probably have a clearer view of what our customers need and how we need to develop our group as a result. There is no question that there is a great need for further development. The savings bank sector is economically stable and ready to adapt to the future needs of customers.

Mr. Schleweis, thank you very much for the interview.

More: The German savings banks want to fight against a financial crisis with all their might.