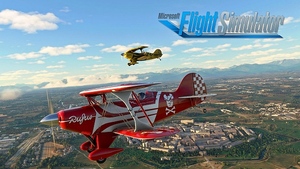 On Xbox One, you can enjoy the same high-quality flight simulation and fun as the Xbox Series X|S, and cloud streaming makes play faster and easier without complicated installation process.

If you access Microsoft Flight Simulator through the Xbox One dashboard, you can experience the game in resolutions up to 1080p and 30fps.

It can also be played on mobile, tablet and low-end PCs. Even in multiplayer, all players can share the same airspace regardless of the device they use. In addition, when connecting to the cloud version, it can be linked with a general Bluetooth controller such as an Xbox wireless controller, making it convenient to play through mobile devices such as smartphones and tablet PCs.

World Update I-VI is automatically streamed to all existing players and works with all previous Xbox Series X|S purchases and purchases from the entire Xbox Marketplace.

With this service expansion, Microsoft Flight Simulator can be played on Xbox Series X|S, Xbox One, Windows 10/11 PCs through the Xbox Game Pass and PC Game Pass, and can also be found on Steam.

“We took the news with a lot of nostalgia”