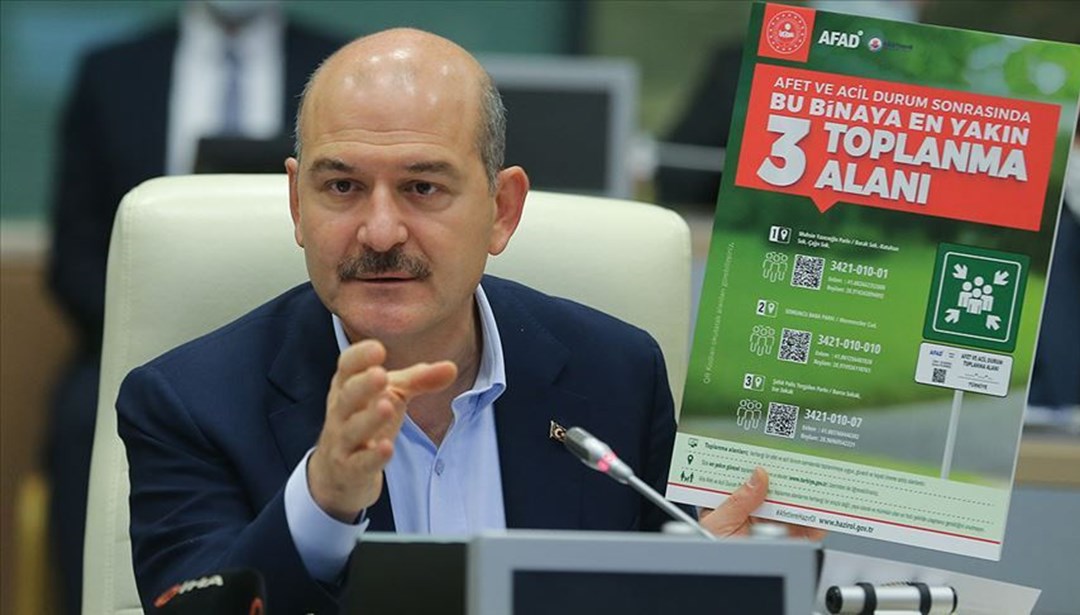 Ministers Noble, in his speech at the opening meeting, explaining that Turkey’s unremitting struggle continued after the 1999 Marmara Earthquake, Earthquake in Izmir reported that analysis of structures.

Stating that 493 meetings were held in the group in the last year, Soylu emphasized the importance of the first 6 hours in the fight against earthquakes.

Emphasizing that it is very important to reflect the planning and action regarding earthquakes and disasters in the first 6 hours and to raise the awareness of the citizens, Soylu continued his words as follows:

“Crash, trap, hold. Especially in natural gas, such as electrical switches, to enable our citizens to take precautions immediately after the earthquake in processes that can cause both fire and poisoning … Then, to ensure that cars do not get on the road, but the roads are open … I hope it is empty. To ensure that the vehicles of firefighters, ambulances, search and rescue teams reach the relevant places and wreckage areas on the roads we consider to be staying. Otherwise? Otherwise, it is a disaster. Let me say this clearly, there is no need to bend it. “

Underlining that in Soylu of Turkey’s earthquake and disaster, “We We’re in a disaster, we are against any kind of disaster are against. Geography have such a geography. How precious, how it is on the eyes of the world, if geography is formed of some jealousy there is more of a feature that is disaster geography. ” used the expressions.

Interior Minister Soylu said that the same situation is also valid for earthquakes, citing the teacher’s description of how to perform prayers from time to time before the funeral and eid prayers.

Stating that earthquakes and disasters are possible issues, Soylu said, “What we need to do for him is to remind as much as possible.”

Referring to the Izmir earthquake, Soylu continued as follows:

“I had the opportunity to watch a little more television due to my illness. It is really appreciated how successful the AFAD trainings with the Ministry of National Education have been. Because we can observe how our children got their education in schools and how they collapsed, shut down, and held on. However, our citizens, whose age range should collapse and hold on when an earthquake occurs, are standing on the table. We have seen dozens of examples of this in the videos shot. We have many public spots, we make many more public spots. We prepared a video about the first 6 hours of the earthquake, now. we will present it by cutting it into smaller sections. “

See also  The bride and groom died in an accident in Świeca. Martyna and Bartosz will rest in one grave

MEETING AND ACCOMMODATION AREAS IN ISTANBUL

Stating that the gathering area is the area within or closest to the neighborhood, where citizens will be evacuated after the first moment of the earthquake, Minister Soylu said:

“By whom are they determined? By the municipalities. What happens after they are detected? They are reported to AFAD within the framework of the law. What will happen? AFAD explains them. Then we start to determine them one by one. Who knows when Allah conservation earthquake?” nobody knows. we try to identify Just them put it after a time. so it who would identify? Turkey Disaster Response Plan within the framework of 26 working detects we found Evacuation Placement Planning Group in our group. Now are we doing this? we do, of course. manager Gendarmerie this is our group . “

“WHAT WOULD YOU LIKE? DO NOT ENTER THESE POLITICAL DEBATE”

Stating that parks, school gardens, vacant lands and astroturf areas can be used as gathering areas, Soylu said, “There are discussions here, of course, political discussions … My command is this: What would you do, do not enter into these political discussions. Or a space that he did not do, that he has planned before, but is empty at that time, may be our meeting area. Then we can change this area. There is no question that it cannot be changed. ” said.

Stating that there may be deficiencies in the works brought to them from time to time, but it should not be seen as bad faith, Soylu continued his words as follows:

In some neighborhoods it was 0.60 square meters, in some neighborhoods it was 0.80 square meters, we took all of these up and above it. A critical meaning, of course, will be criticism, but I invite people who only criticize to a little bit of mercy. There are so many people here. 493 meetings took place. We are all responsible. We all have other public works. We are all in other institutions, but we are here. “

MEETING AREAS WILL BE HANGED AT THE ENTRANCE OF EVERY BUILDING

Minister Soylu announced that information about the meeting areas in Istanbul will be posted at the entrance of each building.

Noble reminiscent of urban transformation continued in operation before the earthquake, “Our logic we viewed until completion of the conversion, even after the transformation of Turkey is a disaster” the assessment found.

Interior Minister Süleyman Soylu said that they will complete the planning by the end of 2020, press the button at the beginning of 2021, and that this work plan will be implemented within one year, as in Kahramanmaraş.

Stating that they have been working with Gendarmerie Search and Rescue, AKUT, IHH, Red Crescent and non-governmental organizations for a long time as seen in the Izmir earthquake, Soylu said, “We are trying to accredit each of them to the AFAD system. We will also see police search and rescue in future earthquakes and disasters.”

Stating that this state is the people of this nation, Soylu said, “In the most difficult days of our nation, it is our main responsibility to share and extend our hands to all the capacity of our state and the most important abilities of our state and nation. Much more than the most developed countries of the world, including America and Europe. “We have a high capacity to respond to disasters. It is our main responsibility to carry this to a much better point.”

See also  The use of salt is to blame, says the author of the Troja footbridge about its fall

Interior Minister Noble, telling the earthquake that occurred in Turkey in the last 10 years, the words continued as follows:

“We take general measures regarding these. Each of them has an experience and knowledge for us. Therefore, we have to continue this here. This is done in cooperation, together, by interlocking. AFAD is one of the most important institutions in the world in terms of this equipment. there is no need to explore, because the most important issue in an earthquake is to provide coordination and organization.

Sometimes we take drastic measures during earthquakes, that’s why. To cause complexity here, to create a cacophony and create chaos is to become disreputable when society expects the state. Therefore, it is necessary to put forward a total understanding here. This is not a place to get opportunities.

On the contrary, it is to be able to put forth all the opportunities and possibilities at hand in the service of the nation under the presidency of AFAD in the difficult day of the nation. The rules are certain, we have to put forward the evaluation that can provide this together with these rules. “

Noble reminiscent of Elazig earthquake occurred on January 24, “a section of buildings in Elazig centers that 15-20 days before it was delivered. Promise to our Elazığ and Malatya, was the middle of 2021. Only the intervention of the earthquake is not immediate, Turkey has developed a capacity so May Allah be pleased with our President, our nation, our state, and our nation is not left victims there.

This winter is a process in which the wounds of the citizens are healed before passing through a winter when the container cities are moved to homes, especially in some places.