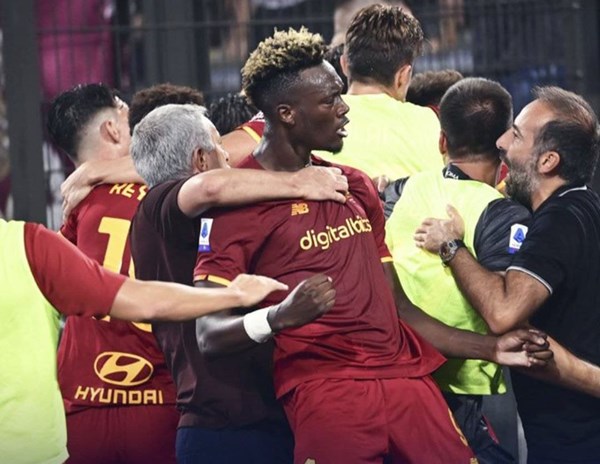 The Portuguese coach, Jose Mourinho, stole the spotlight in his team’s match against Sassuolo in the Italian league, after he celebrated hysterically, the victory of the “wolves”, which coincides with his 1,000th match in his training career, and Mourinho was “the hero of the scene”, after he rushed towards his players to celebrate with them the killer goal. In the 92nd minute.
The Portuguese coach, Jose Mourinho, celebrated the 1,000th match of his coaching career, the match that his team managed to win over Sassuolo in the third week of the Italian Football League, after Stephan El Shaarawy managed to settle the match in the 92nd minute.
Mourinho ran more than 60 meters towards the southern stands of the Olympic Stadium to celebrate and embrace his players, after scoring the second goal, which gave them victory in the coach’s celebration for his thousandth match, and Rome maintained the top spot in the Italian league standings with a “full mark” from 3 matches, outperforming the goal difference. Only on Milan and Naples.
Mourinho said: “It was a special game for me until the last day of my life I will always remember it was the 1000th game, I was terrified of the possibility of defeat, I didn’t feel like I was 58 years old, I was running with the feeling of a 15-year-old.
Mourinho, who coached several teams, Real Madrid, Inter Milan, Manchester United, Chelsea, Tottenham and Porto, along with Roma, managed 1000 matches, winning 638, drawing 205, and losing 157 games.
Mourinho’s treasury includes the Champions League twice with Porto in 2004 and Inter Milan in 2010, and other local titles in Portugal, Italy, England and Spain, including the Portuguese League twice, the Spanish League once, the English League 3 times, the Italian League twice, in addition to the European League.