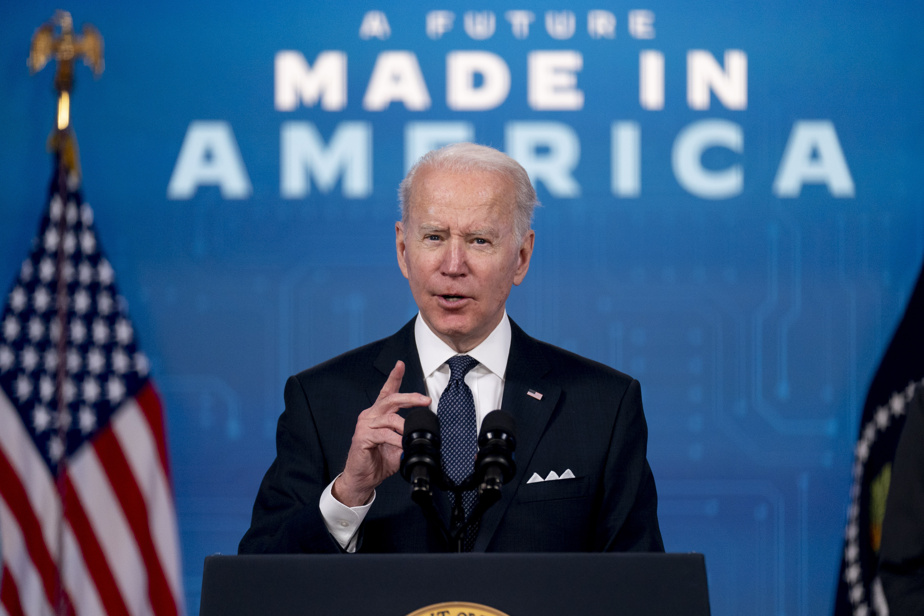 (Washington) Joe Biden joined forces on Friday with giant Intel’s announcement of a massive $20 billion investment to produce microchips in the United States, the shortage of which is contributing to soaring inflation, an emergency economy at the time.

“It is a truly historic investment in the United States and for American workers,” reacted the American president from the White House, seeing it as a means of ensuring the country’s economic independence in the future.

These computer chips are essential for a large number of sectors and products ranging from cars and smartphones to medical equipment and even vacuum cleaners.

Intel announced the construction, starting later this year, of two semiconductor factories near the state capital of Ohio, Columbus, with the aim of starting production of chips. from 2025.

It is an “initial” investment, said its boss Pat Gelsinger, alongside Joe Biden in the White House, referring to 100 billion dollars in investments for the next decade to meet the needs of companies in semiconductors.

Joe Biden, for his part, underlined the enormous economic potential by taking the example of cars, of which 4% of the components are currently semiconductors. In 2030, these will represent 20% of automobile manufacturing.

“My administration will continue to use every tool at its disposal to secure supply chains, build our economic resilience, and manufacture more in America, because ultimately it’s about national security, about economic security,” underlined the host of the White House.

According to him, Intel’s new factories in Ohio are also “a symbol of what America is like”: people from all walks of life working together to have “the most sophisticated industry” in the world.

Intel plans to hire 3,000 people for these sites, the construction of which will require 7,000 construction workers.

With the pandemic highlighting industrial dependence on Asia, governments, particularly in the United States and Europe, have become concerned with securing their supply of semiconductors after years of stagnant manufacturing. is moved to Asian countries at lower cost.

The issue is also diplomatic since the chips are largely manufactured in Taiwan, on which China has expressed territorial claims.

Joe Biden’s economic advisers have also observed that last year, a third of annual price increases were due “only to high car prices”, where the shortage of chips has been most severe.

Joe Biden therefore urged Congress on Friday to pass legislation aimed at strengthening research and development as well as the manufacturing in the United States of essential products.

The Intel boss also urged lawmakers to move forward. “We take our part [de travail] but we cannot do everything alone,” he stressed, highlighting the huge economic benefits.

The Senate adopted a law on innovation and competition last June. “The administration is working with the House and Senate to finalize this legislation,” the White House said.

The text includes funding for the “CHIPS for America Act,” which will provide $52 billion “to catalyze more private sector investment and maintain America’s technology leadership,” according to the White House.

Since the start of 2021, the semiconductor industry has announced nearly $80 billion in new investment in the United States through 2025, according to data from the industry federation, cited by the White House.

According to Commerce Secretary Gina Raimondo, “American consumers can expect lower prices” thanks to the return of production of the semiconductors that power our economy.

However, given the delays in starting production, there will be little effect on inflation in the short term.

Samsung hints at merging the “Note” series with the “S”

Modi first! Top of the list of most popular world leaders – NEWS 360 – WORLD