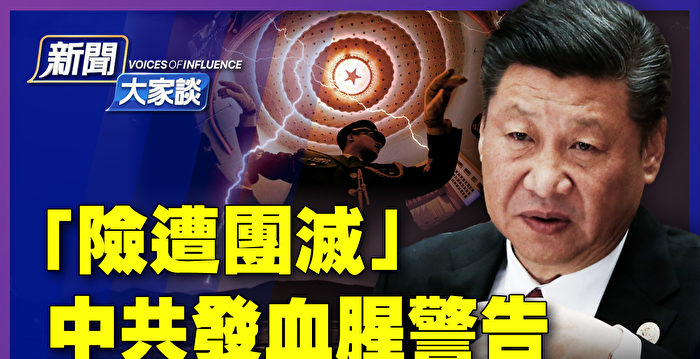 [Epoch Times, June 23, 2021]Hello, everyone, and welcome to the “News Talk” on Wednesday (June 23). This is Lin Lan (host). Today’s guests are current affairs commentators Qin Peng and Lin Xiaoxu.

Today’s focus: Recalling that “the regiment was almost destroyed”, the CCP issued a bloody warning, and the dark tide surged in the party? In an effort to help the military drug institute to shed its responsibilities, the WHO adviser Dassak was “evaded”, and Beijing’s dark line was removed? Is the source of the epidemic close?

The COVID-19 committee led by the prestigious British medical journal “The Lancet” issued a statement on June 22, announcing that Peter Dassack, chairman of the US non-profit organization “Ecological Health Alliance”, would “evade the COVID-19 committee’s comments on the origin of the virus. jobs”.

The Lancet COVID-19 Committee was launched on July 9 last year to assist governments, civil society organizations and UN agencies in responding to the COVID-19 pandemic. Peter Dasak is a member of the committee and participated in the World Health Organization’s virus traceability investigation in Wuhan at the beginning of this year.

Dasak’s main controversy was that in February last year, he led a statement expressing his support for Chinese medical professionals and condemning the so-called “conspiracy theory” surrounding the origin of the virus. This statement was co-signed by 27 public health experts and was published in The Lancet.

In this statement, Dasak declared that he has no conflicts of interest. However, the media soon disclosed that the Eco-Health Alliance hosted by Dassak had provided 600,000 US dollars for the Wuhan Virus Research Institute’s “Bat Coronavirus” project, and the two had in-depth cooperation.

Recently, the conspiracy theories of the “laboratory leak theory” have gradually been washed away, and people in the political and academic circles have begun to request investigations into this possibility. Against this background, the “Lancet” now requires Dasak to evade research on the origin of the virus, and also requires 27 scientists who jointly signed a statement condemning the “conspiracy theory of the source of the virus” last year to re-evaluate themselves and what the article mentioned. Whether there is a conflict of interest among relevant parties, the statement submitted by Dassak after updating its assessment was published separately by The Lancet.

In the statement, Dasak claimed that he had not received any funding from China. The work of the Eco-Health Alliance in China was funded by two US government agencies. In addition, he explained the scope of cooperation between him and the Wuhan Institute of Virology.

1. Xiaoxu, in fact, what the outside world is most concerned about is whether there is any research on functional gain in the cooperation between him and the Wudu Institute? Can you see relevant clues from his statement? In addition, Dassak claims that he has not received any funding from China. Does it mean that there is no conflict of interest?

2. In his latest information disclosure statement to The Lancet, Dasak stated that his work in China was funded by the National Institutes of Health (NIH) and the United States Agency for International Development, and was evaluated in advance by US federal agencies. And approved. Some people say that this is tantamount to shifting the blame to NIH.

However, Fauci, director of the NIH Institute of Allergy and Infectious Diseases, said at a congressional hearing in early June that NIH has never provided Wuhan Institute of Virology with funding for “functionally acquired” experimental research. ——Qin Peng, whose statement is true?

3. The New York Times interviewed Shi Zhengli last week. She defended that her laboratory had never done or cooperated with a “functional gain” experiment to increase virus toxicity. Her experiment was not to make the virus more dangerous. But to understand how viruses spread across species. ——Xiaoxu, how do you respond to her statement?

Xiaoxu, there is a view that, to some extent, are Shi Zhengli and others a scapegoat for the CCP? Think they are only engaged in scientific research, and the CCP government should be responsible for the spread of the epidemic? By the same token, were there some of the 27 people who made a statement in The Lancet at that time who really sympathized with China’s front-line medical practitioners, believing that they were under pressure and faced unreasonable doubts?

Some viewers said that the crows in the world are generally dark, and the governments of all countries are not doing good things. Can you respond by the way?

4. During this epidemic, “The Lancet” has been caught in controversy many times. For example, it published an editorial praising the CCP for “the experience of controlling the epidemic is worth learning”, issued a political declaration expressing Sack and others, and published an article claiming that hydroxychloroquine is against Articles that were ineffective in treating COVID-19 were forced to be retracted after a huge controversy. However, the topic directions set by these articles have had a great impact on the academic and even political circles.

Qin Peng, why does “The Lancet” have such a performance? What role should these authoritative medical journals play on public health issues that have a huge impact? What is the actual performance?

“Vanity Fair” disclosed that at least 6 co-signers worked or received funding from the Eco-Health Alliance. The leaked e-mail quoted also revealed that Dasak had written to two scientists who had collaborated with Shi Zhengli on research, saying that they should not Join the joint sign, so as not to make the outside world pay attention to their scientific cooperation contacts.

5. Xiaoxu, do you want to add? In addition, the latest action of “The Lancet” seems to have the meaning of saving the situation. Do you think these actions are sufficient to rebuild public confidence? Will it help prevent similar problems from happening again in the future? Is there less external resistance to the epidemic investigation?

[Did a high-ranking official fled? The Central Commission for Discipline Inspection issues the threat of “destroying the door”]

On June 19, the website of the Central Discipline Inspection Commission of the Communist Party of China suddenly published an article in the “Key News” area, entitled “Never betraying the party is more than an oath.” The article reviewed 1931, one of the early leaders of the Chinese Communist Party, Gu Shunzhang, the head of the Special Technology Bureau of the Communist Party of China, defected after being arrested by the KMT and confessed information about the CCP’s activities in Wuhan. The CCP immediately issued Notice No. 223, announcing the expulsion of Gu Shunzhang from the party and calling on the whole party to fight against the traitors.

However, what was not mentioned in the article by the Central Commission for Discipline Inspection was that after the CCP issued Notice No. 223 that year, it launched an operation to destroy the family of Gu Shunzhang, and more than 40 relatives of Gu Shunzhang were killed. Therefore, some netizens commented that people within the CCP system or familiar with the history of the CCP will feel this article is murderous.

See also  Will Lukashenko turn a "weapon" on migrants against Latvia? - Opinions - News

The timing of the Central Discipline Inspection Commission’s publication of this article was strange, because it was not the anniversary of the publication of the 223 notice that year, but it coincided with the recent disclosure by the US media that one of the most senior officials in the history of the Chinese Communist Party surrendered to the United States. There is even a roll call by the media, and the surrender is Dong Jingwei, Vice Minister of the Ministry of National Security of the Communist Party of China.

Although the CCP immediately published an article claiming that Dong Jingwei hosted a symposium on June 18 and demanded to do a good job in countering spies and internal rape, which is tantamount to refuting the rumors, the official report did not provide Dong Jingwei’s photos and lacked details.

6. Qin Peng, Xiaoxu, in your judgment, did any officials fled? Did Dong Jingwei fled? Some people questioned that senior officials who really possess intelligence rarely have the opportunity to leave the country alone?

7. Qin Peng, Xiaoxu, and the Central Commission for Discipline Inspection of the Communist Party of China used the memory of Gu Shunzhang this time to issue a very bloody warning to the perverters, “One person defected and the whole family was imprisoned.” However, there are many defectors in the history of the CCP. Why use Gu Shunzhang as a case?

When it comes to official defections, it is traditionally believed that they have failed in the political struggle within the party or that the targets of the anti-corruption campaign may flee. However, the CCP’s anti-corruption movement has gradually become low-key in recent years. After the 19th National Congress of the Communist Party of China, no senior officials above the Politburo have been dismissed. Why is it that at this time, the rumored “most senior official” fled? Why did the CCP publish such a murderous article to shock officialdom at this time?

[Support]To escort the truth and speak out for silence, just today, support the Epoch Times
https://donate.epochtimes.com