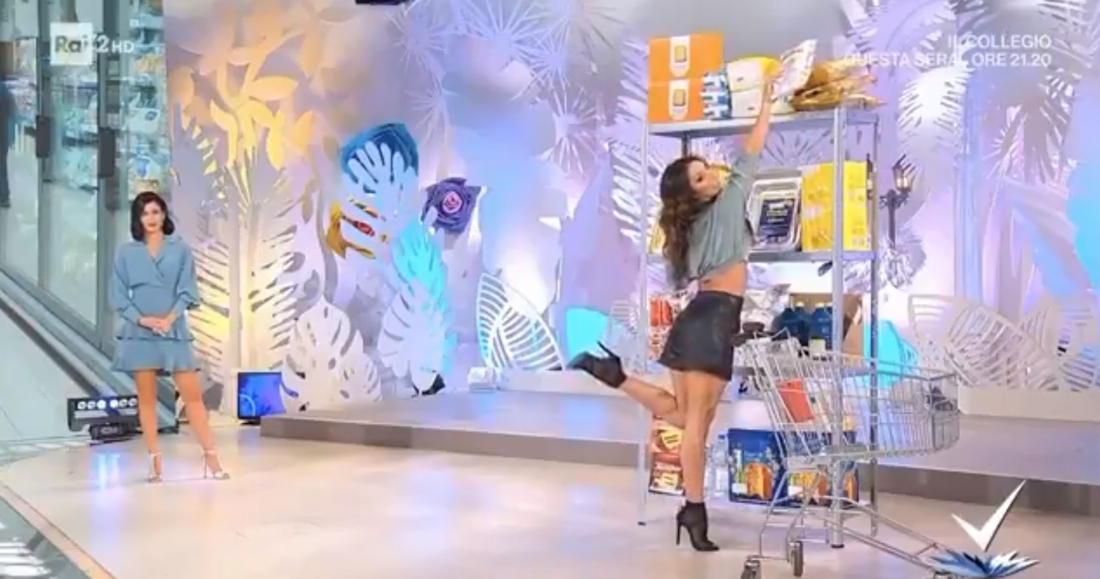 In the program No sooner said than done women were taught how to push a shopping trolley in an enticing way and take goods from the shelves.

An instructional video on the Italian public broadcaster that gives women tips on how to ‘shop in a sexy way’ has caused a storm of outrage. The guide was part of No sooner said than done (literally: ‘So done’), a lifestyle program on RAI2, the second channel of the public broadcaster. Ballerina and pole dancer Emily Angelillo counseled women on how to look sensual in the supermarket.

At the beginning of the clip, Angelillo, dressed in leather shorts and high heels, did a little dance and then explained to a young woman how to walk around in heels. Then she demonstrated how to wear high heels in places where they are not normally worn, such as in a supermarket.

Her tips included how to get a seductive stroll around pushing a shopping cart and how to fish a packet of chips from the top rack while lightly adding some extra intrigue by lifting one leg. Angelillo also showed how to pick up a product from the ground in a ‘non-vulgar’ way if you happen to drop something.

Outrage over the TV clip was heightened by the moment it was shown: on the eve of the International Day for the Elimination of Violence Against Women. Some viewers even thought it was a parody. Members of the government have asked for clarification and want to know why this was shown on public television.

“How much longer do we have to talk about women in that false and stereotypical way, with stiletto heels, sexy moves, always perfect, mermaids or witches?” Italian Agriculture Minister Teresa Bellanova wrote on Twitter.

Because of the strong reactions, the RAI has’No sooner said than done‘canceled. The broadcaster’s managing director, Fabrizio Salini, has ordered an investigation into the episode. He has stated that it ‘has nothing to do with the spirit of public services and the editorial line of the RAI’. Bianca Guaccero, the presenter of the program, has apologized for the ‘superficiality’ of the episode.

India farmers press on with protest despite offer to talk