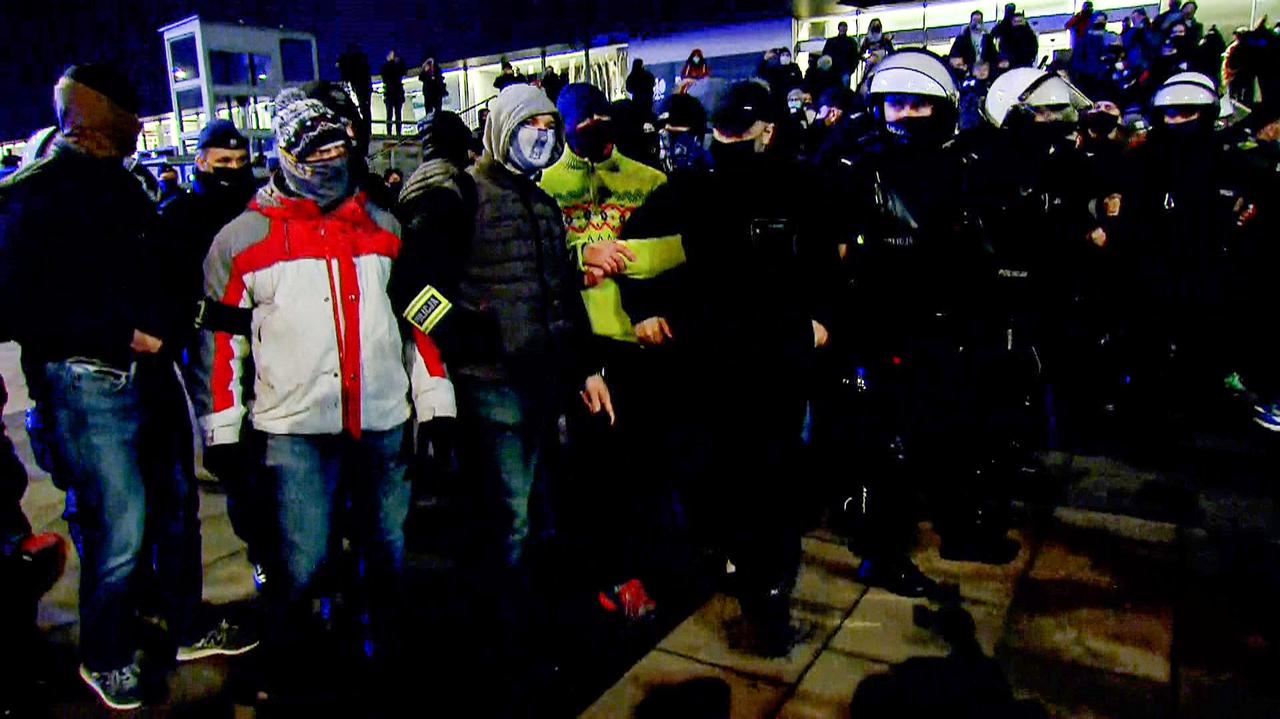 It is not possible for someone to come in and try to pick up telescopic batons. Especially if we see big men, and some of them already have specific bands on top with the inscription “police” – explained the press spokesman of the Warsaw Police Commander, Commissioner Sylwester Marczak, commenting on Wednesday’s demonstrations in Warsaw. As he added, “a policeman uses a telescopic truncheon because someone is trying to rip it out.” – This is also the reason why the policemen, in this particular case, use a telescopic baton – he said.

The protest of the Women’s Strike under the slogan “Blockade of the Sejm” was dispersed on the streets of Warsaw on Wednesday evening. TVN24 cameras recorded, among other things, a situation when there were scuffles in the crowd, and masked men with telescopic batons and tear gas entered the action. Some had reflective bands that said “police” on the arm, but not all of them.

“That’s why the policeman uses a stick, because someone is trying to snatch it from him”

The spokesman of the Warsaw Police Headquarters, Chief Commissioner Sylwester Marczak admitted that they were undecorated policemen.

– The vast majority of mothers who want to peacefully participate in various projects, but we forget that not all people have a peaceful attitude – said Marczak in an interview with TVN24.

– If we see in the video, policemen who are in undersized use of a telescopic baton, I encourage you to read the video we posted on our Twitter, in which we see, among other things, how these policemen are attacked with gas and that is why the policeman uses clubs, because someone is trying to snatch it. This is also the reason why the policemen, in this particular case, use a telescopic baton – he explained.

As he added, “when it comes to the activities of policemen in the crowd, the policemen detained a person who had violated the bodily integrity of the policemen”. He estimated that the telescopic baton “did not land in random places”.

Marczak was asked how the person who was at the protest should know that he is dealing with a policeman when someone in plain clothes hits other demonstrators with a telescopic baton. – We must be aware that a person who comes to participate peacefully in various types of protests, when he sees that we are dealing with some dynamic activity, he does not engage – he assessed.

– There is no way for someone to come in and try to pick up telescopic batons. Especially if we see large men, and some of them already have specific bands on top with the inscription police – he said. In his opinion, “the slogan of indicating that the police is working was presented”.

– In this case, we are talking all the time about breaking the law, about the committed crimes of violating the bodily integrity of policemen, and this is the basis for the actions of these plain policemen. Because in situations where the law is broken, where policemen are attacked, we have to arrest the perpetrators, and this is nothing special. Where policemen are attacked, the perpetrators are arrested, he said.

On Thursday, a demonstration took place in front of the seat of the District Court in Warsaw, which was an expression of solidarity with an activist arrested on October 26 in Plac Trzech Krzyży during a women’s strike and accused of actively assaulting a police officer. A 17-year-old was detained during the protests. According to the father, who contacted the editorial office of Kontakt 24, the boy was to spend the night in custody, and the police, he said, did not want his parents to see him.

WATCH TVN24 ON THE INTERNET

The press spokesman of the Warsaw Police Commander, Chief Commissioner Sylwester Marczak informed that “a 17-year-old person is responsible as an adult for his actions”. – In this case, all activities with a given person are performed pursuant to the Code of Criminal Procedure. The age of majority applies to civil matters, not criminal matters. In this case, the Code of Criminal Procedure decides, which clearly states that a 17-year-old person is responsible for his actions – he explained.

As he added, “where there are demands to inform individuals, we meet such demands, because it is the duty of the policemen.”

“Was there a need to violate the inviolability of the policemen?”

– In order to talk about why something happened, it is necessary to pay attention to what caused the actions of the policemen. The detention of a person is due to how he behaved. If the boy was not aggressive, if he behaved properly, there would be no reason for any intervention and hence there is action on the part of the policemen – he explained.

– The arrest is due to the way the man behaved. He committed a crime, and if we take into account the cause-and-effect relationships and simply ordinary logic, after committing a crime, you must take into account criminal liability – he added.

Sylwester Marczak informed that yesterday a total of 10 people were detained. – Because some people did not want to provide their data. These are the people who were cordoned off by the policemen and the rest are six people detained for crimes, we’re talking about five men and one woman – he said.