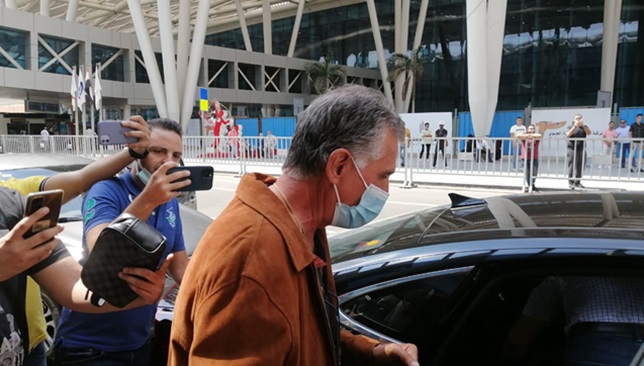 Sport 360 – The new coach of the Egyptian national team, Carlos Queiroz, arrived at Cairo Airport to begin his mission with the Pharaohs.

The Egyptian Football Association decided to appoint Queiroz as coach of the national team instead of Hossam El-Badri, who was thanked and his assistant staff due to the decline in results, the latest of which was a 1-1 draw with Gabon in the African qualifiers for the 2022 World Cup.

And the Portuguese coach, Nilo Vingada, was received by his compatriot Queiroz upon his arrival in Cairo, where the latter will go to his residence hotel.

The Egyptian Football Association, headed by Ahmed Megahed, will hold a presentation ceremony for Carlos Queiroz, the new coach of the first national team, at one in the afternoon next Thursday in the conference hall at the headquarters of the Federation.

The new coach will hold his first press conference on the sidelines of the national team camp in preparation for the meeting with Libya in the sixth African group qualifiers.

Queiroz will begin his mission with Egypt by preparing for the two matches against Libya between October 9 and 12, in the third and fourth rounds of the 2022 World Cup qualifiers in Qatar.

A decision to postpone the Egyptian Cup matches

The Egyptian Football Association’s competition management decided to postpone the matches of the 8th League and the semi-finals of the Egypt Cup, in order to allow the national team to set up a camp to prepare it for the Libya matches early.