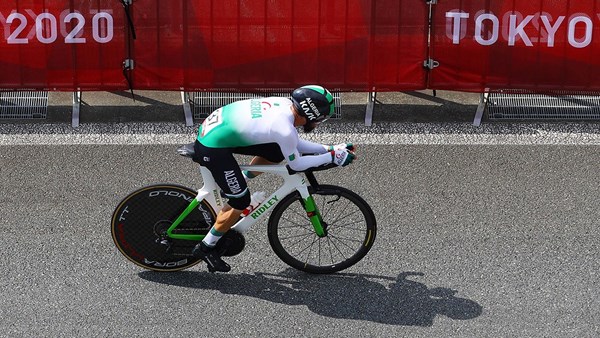 Algerian cyclist Azzedine Laqab is subjected to racist words during the cycling competitions at the Olympic Games “Tokyo 2020”.

Algerian cyclist Azzedine Laqab was subjected to racist speech during the cycling race at the Olympic Games “Tokyo 2020”, when Patrick Muster, sporting director of the German Cycling Federation, picked up the microphone, telling Nikias Arnt: “Be ahead of the camel riders! Let’s pass them!” .

These words were picked up during the broadcast of the race on the German network “ARD”.

In turn, commentator Florian Nass said immediately after hearing these words: “This was the voice of Patrick Muster cheering, and I must be honest: If I really understand what he was saying, it’s a huge mistake. Words fail me.”

“Something like that has no place in sport. Sorry, I can’t think of anything. And you have to be aware of that when you’re in an international race, with the cameras and microphones set up.”

Patrick Moster, cycling coach of the Association of German Cyclists, tries to cheer on Nikias Arndt in the Olympic time trial. An Algerian and an Eritrean drive in front of Arndt. #Tokyo2020 pic.twitter.com/UoDLVQWlWf

For its part, the German Olympic Sports Federation stated that it supports the Olympic values ​​of respect, fair play and tolerance, and that it will meet with Müster on this matter, pointing to the importance of the apology made by the sporting director of the German Cycling Federation.

Moster apologized and said, “In the heat of the moment, with the pressure we had in that moment, I mischosen the words. I’m sorry, I can only apologize deeply. I don’t underestimate anyone.”

“We have a lot of friends of North African descent. Like I said, I’m sorry,” he added.

Khair Eddine Barbari, President of the Algerian Cycling Federation, denounced the German coach’s racist words, stressing that he had written to the International Cycling Federation and the Olympic Committee as well.

And a statement published today, Thursday, through his Facebook account, said, “On my own behalf and on behalf of the Algerian bike family, I express my strong condemnation of the racist verbal assault, which was subjected to the hero Azzedine Lafab by the German technician during the anti-clock race of the ongoing Olympic Games Currently in Tokyo, Japan.

He added that “immediately after the incident, the International Cycling Federation and the International Olympic Committee were contacted, highlighting to them the seriousness of the racist incidents that have nothing to do with Olympic values.”