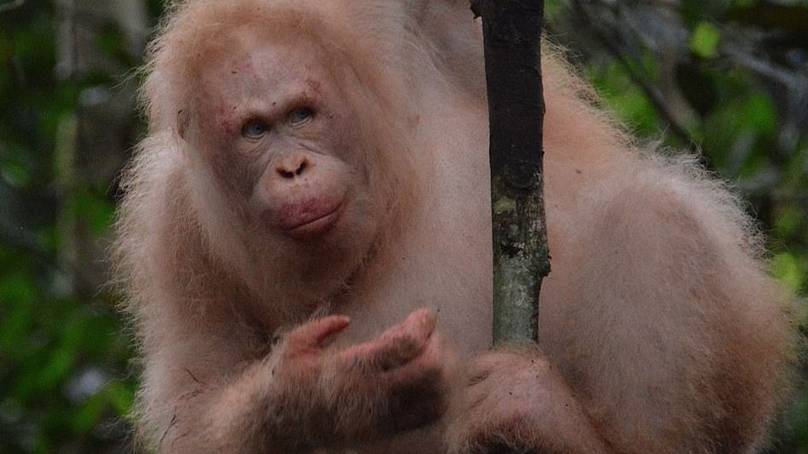 The only living albino orangutan known in the world, Alba, is truly one of a kind. And, a year after his release in the Borneo rainforest, it seems that the blond-haired and blue-eyed primate is living his best life in nature.

Alba was greeted by environmentalists in 2017 after being locked up in a cage as a pet by villagers in the Indonesian region of Borneo, Kalimantan.

The Borneo Orangutan Survival Foundation (BOSF), which welcomed her, reported that Alba had been separated from her mother and was seriously underweight due to lack of food, full of parasites and suffering from dehydration.

After her rescue, the six-year-old monkey spent nearly two years recovering, before being released into her natural habitat – a 10-hectare artificial forest island near the group’s rehabilitation center in Kalimantan – in December 2018.

“After learning that it is capable of building nests, foraging independently and no longer dependent on human assistance, we concluded that it can survive in the forest,” said Indra Exploitasia, director of biodiversity conservation at the ministry of the environment.

And it looks like it has thrived ever since. This week, the organization confirmed news that Alba had been spotted and that it was monitoring three other orangutans that had recently been released.

A statement on the BOSF website reads: “While monitoring Unyu, one of the [the] Recently released orangutans, the team watched as they encountered Alba, the only albino orangutan known to man.

“Their immediate greeting served to remind the heart that during her stay at the BOS Foundation’s Nyaru Menteng Rehabilitation Center, Alba had been hosted together with Unyu.”

Indra added: “I asked the post-release monitoring team (PRM) – staffed by the National Park Administration and the BOS Foundation – to continue observing Alba for the next three months.

“We really want to ensure that Alba can thrive and live independently in this national park.”

The team responsible for ensuring the survival of the orangutans released in the national park is made up of individuals from local communities who are there to ensure the sustainability of the program.

Dr. Ir. Jamartin Sihite, CEO of The BOS Foundation, said that the people involved in the project are committed to collaborating with various conservation bodies to conduct observations and monitor the orangutans released within the park.

“Through this joint effort, we can assess the success rate of orangutans and habitat conservation efforts in central Kalimantan,” he explained.

When Diplo and The Strokes need a deepfake, they go to this guy