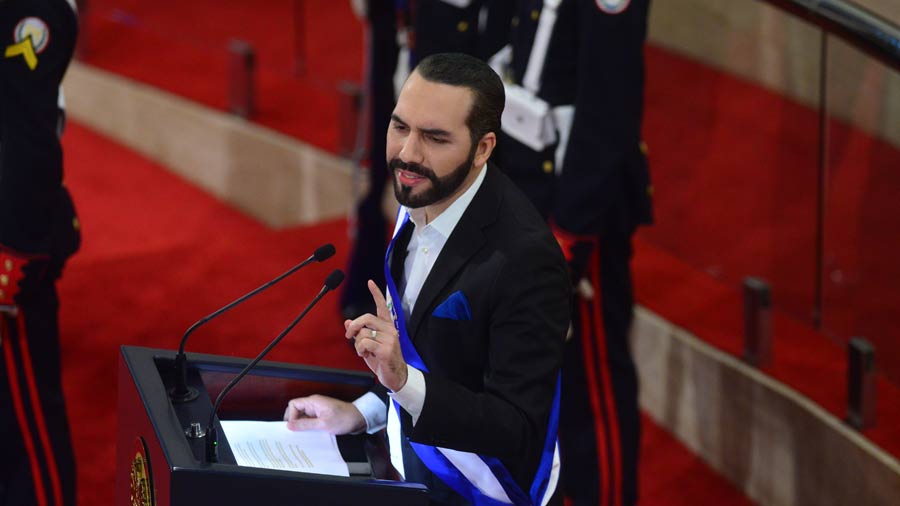 Investors have reacted suspiciously to recent policy decisions. In the stock market they already speak of “the Bukele risk premium”.

The same day that the Bitcoin Law came into force, the same one that the government promises will attract a lot of investment to the country, El Salvador’s main debt creditors again showed their distrust by selling Salvadoran bonds at a lower price, a trend which has stayed that way all week.

From Tuesday until yesterday, the different bonds of El Salvador fell between 8% and 15%, reaching prices of $ 90, $ 87 and $ 75 for every $ 100 invested, which in turn, means a higher interest payment to compensate the risk you have today in front of your creditors.

But it has not been the introduction of the Bitcoin Law that has scared off investors, but rather, the possibility of a presidential re-election of Nayib Bukele and an unpredictable fiscal situation due to the government not finalizing an agreement with the International Monetary Fund. (IMF) to improve its finances.

In an article on El Salvador, the Financial Times reported that although Bukele announced the purchase of 150 bitcoins on the day the law kicked in, “the bond traders were not impressed.”

“The market had taken notice of the bitcoin news”… but “the news that really shook the market was that (Bukele) rigged things up to run for re-election,” said Kevin Daly, chief investment officer at Aberdeen Standard.

On Friday, September 3, late at night, the Supreme Court ruled that the president could seek a second consecutive term, a decision condemned by the United States.

See also  Covid for 683 in the district; Cure for 683 people: Deepika.com Nattu Visesham

On Monday, because it was a public holiday in the American country, the stock markets did not open and it was until Tuesday 7, just when the Bitcoin Law and the launch of the Chivo Wallet started, that investors ran to sell at a low price the bonds of El Salvador.

“It’s about Bukele’s risk premium,” said Siobhan Morden, director of fixed income for Latin America at Amherst Pierpont, a New York-based financial analysis firm, who further argued that the court’s ruling had The chances of El Salvador reaching a new agreement with the IMF and ensuring access to external funds much needed for the economy are complicated.

“Everything is centralized decision-making and he is not surrounded by a team of top-notch technocrats,” he said.

The IMF has opposed the adoption of bitcoin as legal tender, citing risks to financial stability, consumer protection and the environment.

“The most direct cost of mainstream adoption of a cryptoasset like Bitcoin is macroeconomic stability. . . Monetary policy would lose steam. Central banks cannot set interest rates in a foreign currency, ”Siobhan wrote in July.

For his part, Ramiro Blazquez, strategist at BancTrust & Co., told Bloomberg: “It is a purely political risk, which grew after the re-election news and had not been discounted,” referring to the fall in bond prices. . “It further distances the IMF agreement and could intensify the diplomatic conflict with the United States,” he added.

Siobhan recalled that El Salvador needs between $ 3,500 and $ 4,000 to finance its deficit, cover the costs of the pandemic and refinance the existing debt. But its financing possibilities are increasingly difficult.

The last time it issued a $ 1 billion bond was in July 2020 and since that date it has not been able to access the market again. “Bukele still has a fiscal deficit roughly double the pre-Covid level and debt is 90 percent of GDP.”

With a large debt payment of $ 800 million looming in January 2023, the analyst warns that Bukele has limited room for maneuver.

Investors are more expectant of what may happen at the political level. At the end of July, Moody’s agency lowered the country’s credit rating to “junk bonds”.

And despite the fact that the IMF allocated an additional $ 400 million in Special Drawing Rights to the country that go directly to its reserve asset, this would only mean “a short-term relief, but after that, the government could be forced to resort to the his. citizens to finance themselves ”.

“Local creditors (banks) are the lenders of last resort … but if they are unwilling to lend, there may be a shift towards coercive lending,” such as the possible nationalization of private pensions or even capital controls, “he warned.

“Or, as Daly said: ‘There is a real risk that it will all end in tears,'” the Financial Times ends quoting.

And what are investors saying about Bitcoin? The same article collects some impressions: “The notion that the poor keep their savings in cryptocurrencies is absurd. It’s tremendously volatile and you’re talking about the world’s most vulnerable people, ”said Michael Schlein, CEO of Acción, a nonprofit that invests in technology for financial inclusion.

See also  There is PPKM, Unemployment and Poverty Rates are Projected to Increase Again

Siobhan warned in July that “Without robust measures against money laundering and terrorist financing, crypto assets can be used to launder money.