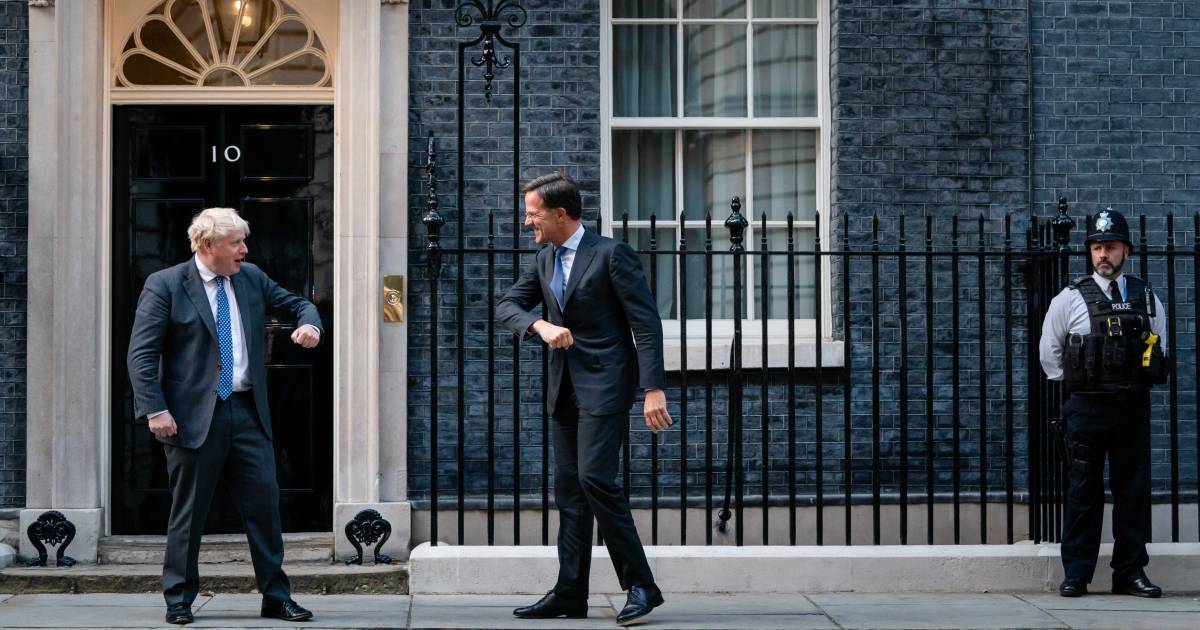 Outgoing Prime Minister Mark Rutte has paid a lightning visit to British Prime Minister Boris Johnson to deal with the problems surrounding Brexit and the evacuations in Afghanistan. “What is still possible in Kabul?”

During a dinner at 10 Downing Street in London, Rutte determined with British Prime Minister Boris Johnson that the crisis in Afghanistan will require closer cooperation between the United Kingdom, Europe and NATO in the future. The United States is no longer seen as the partner that can be readily relied upon in such situations.

“Without the US, no major geopolitics can be solved,” Rutte said after the meeting with Johnson. “Because of their ‘might’ and ‘power’ and their democratic orientation, that is not possible.” The outgoing Prime Minister hinted that he would see a greater role for the EU and the UK in the future. “Post-Afghanistan you have to seek cooperation to face problems.”

Rutte arrived at Johnson’s official residence in a Jaguar, while house cat Larry washed next to a police officer on duty after a flight to Luton Airport. In addition to Afghanistan, the visit also discussed the struggles surrounding Brexit and COP26, the climate summit that will take place in Glasgow at the beginning of November. According to Rutte, the Netherlands can help to find practical solutions to points of contention through its good relationship with the UK.

The situation surrounding the Northern Ireland Protocol, part of the Brexit agreement to keep the peace in Northern Ireland, received special attention. This section allows checks on goods between the British mainland and Northern Ireland. Some products may no longer be imported at all in the future. Rutte stated that he has full confidence in Johnson, who denounces the inconvenient rules for the UK.

If supermarkets in Northern Ireland need products from factories in England, Rutte outlined an example, they should not have to comply with strict EU rules. “Products that you know are sold in that supermarket and don’t cross the border into the Republic of Ireland. You can find practical solutions for these kinds of issues. That’s what matters in the end. To make Brexit a success.”

Rutte broke a lance for the British, without stepping on the EU’s toes. “The EU really wants to help with this. Also the people in Brussels. At the same time, we must understand that the protocol is there. And that European unity is not in question.” Staying away from ‘big statements’, and referring to the sometimes harsh language of EU President Ursula von der Leyen and French President Emmanuel Macron, is key, he says.

Rutte did not dare to give any guarantees, but his optimistic attitude showed that the maintenance had gone smoothly. Nor could the troubled politician, who saw ministers Ank Bijleveld (Defense) and Sigrid Kaag (Foreign Affairs) resign, give hope to Afghan interpreters trapped in the country. He discussed joint initiatives with Johnson, but the ‘dangerous’ situation leaves little room for maneuver.

“We have expressly agreed to look more closely at what can still be done in Afghanistan and Kabul. That’s not something you can achieve tomorrow. It is a wish we have.” Rutte did make it clear that in the future we want to tackle such a crisis differently – read: without the US as an anchor, but with the UK on board. “Without signing big contracts. Practical.”

Watch our news videos in the playlist below:

the Russians talked about the mystical command of Lithuania