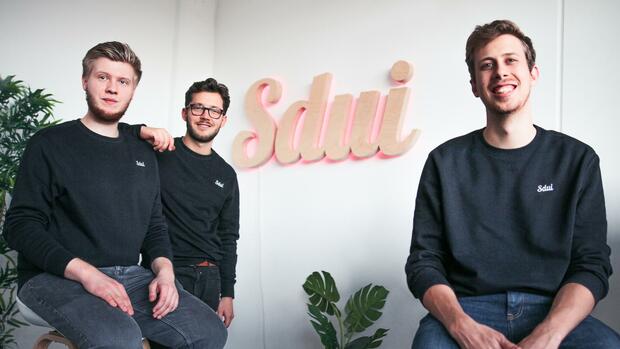 Dusseldorf Even before their television appearance in “The Lion’s Den” was broadcast, the founders of Sdui had to delete their phone number from the Internet. In the television show on Vox, start-ups pitch for investor funds. Of course, it is also about advertising for television viewers – and the Sdui app is the product of the hour in the corona crisis.

During school closings, the small program connects administration, teachers, parents and students. The principals can report on the safety precautions taken and students can submit their homework. Those who wanted to find out about the offer hardly got through at Sdui. The punch line: The investors around Frank Thelen and Carsten Maschmeyer on the television show canceled the founders on Tuesday evening. They didn’t want to put venture capital into the company.

When the program was recorded about a year ago, they probably could not have imagined how quickly digital education opportunities would be sought across Germany. Until the outbreak of the corona crisis, education was considered bad business in Germany. This is not only due to the schools, which often have difficulties with digitization: “Education is a difficult market, especially in Germany,” says the managing director of the High-Tech Gründerfonds, Alexander von Frankenberg.

Many consumers of venture capitalists would find it difficult to invest due to the lack of willingness to pay among consumers, the strong influence of the countries and the lack of large start-ups in the sector. In short, it’s unlikely to make a lot of money quickly with an education start-up. But that doesn’t mean that you can’t earn something solidly.

For the founding team Daniel Zacharias and Jan Micha Kroll, it was primarily about the matter from the start: “We want to solve real problems,” says Zacharias. And that was often revealed to him in his own school days at Martin-Butzer-Gymnasium in Dierdorf near Koblenz in the form of a note on the door to the classroom: the first hour is canceled, teaching material in the secretariat – Daniel Zacharias and his classmates were now early for that got up and sprinted to the bus.

“At some point we complained to the headmaster that communication had to improve,” says Zacharias. He had probably made a mistake in the tone, because then he had to write a sentence, he recalls. “The school administration said that we should come up with something for ourselves how messages can reach all affected students and parents in the short term.” And they did.

With their digital communication solution for their own school, they won the Youth Research competition in 2015. A year after graduating from high school in 2017, Zacharias and Kroll founded their company Sdui. More than 1000 schools across Germany now use the app as a digital infrastructure – and were even able to completely avoid hourly losses with the software.

“Thanks to Sdui, we didn’t miss a single school hour during the Corona period,” reports the deputy headmistress of the Laurentianum in Arnsberg, Verena Verspohl. The program replaces the satchel mail on normal days as well as some copied task lists – and now even the classroom. A corresponding chat room is automatically set up for each course via Sdui. “At the beginning of each lesson, the teacher asked if everyone was there and then discussed with the class how the lesson should be organized,” says Verspohl.

The quick changeover was possible for all classes because the school had already introduced Sdui for everyone after the summer holidays. From week to week, more schools are now using Sdui. The company promises to set it up within one working day. “Sdui is fully compliant with data protection and works without private email addresses,” emphasizes Daniel Zacharias.

Another advantage compared to other solutions: “Teachers can set when they want to be available and delete posts if this would bullet a student, for example.” Schools or municipalities pay an average of EUR 1.45 per student per year for the Sdui app.

The price varies depending on the number of students and schools in a municipality. With this, the Koblenz start-up is currently generating a clearly seven-digit and above all predictable turnover. Because Sdui is sold as a three-year subscription.

Advertising is not an option

In view of the almost 42,600 general schools in Germany, the 40-employee company still has great growth opportunities. Frank Thelen and Carsten Maschmeyer did not do that in the entertainment show. “Thelen would have invested if we had shown students about mobile phone contracts via the app,” said Zacharias to the Handelsblatt, still sounding outraged. “We can’t bombard the students with advertising about their homework.” That was not possible for him under any circumstances.

The adherence to principles has so far paid off for the two-year-old company. Despite the cancellation of Thelen and Co., the Sdui founders were able to complete a financing round in 2019. The existing high-tech start-up fund and two business angels joined the existing investors, and invested a total of two million euros. According to the analysts from the Startupdetector, Sdui is one of only eleven German education start-ups under three years of age that were able to collect money in the second half of the year.

Sdui originally wanted to collect a million in “The Lion’s Den”. Maschmeyer thought that was too much, Alexander von Frankenberg from the High-Tech Gründerfonds sees it more differentiated. Due to the difficult structural situation in the education sector, there are hardly any start-up teams that would think big. It is different in the USA and China.

The founders of Sdui are also not short of ideas for growth and expansion. Daniel Zacharias thinks of an emergency function such as an amok alarm. “At these critical moments, teachers have to decide whether to barricade themselves with a class or run into the hallway to warn others,” he says.

Sdui is already preparing for the next round of financing. Investors should no longer lack the imagination of where the sudden demand for digital solutions for school could come from.

More: “Are we early in the pandemic” – RKI disagrees with Leopoldina’s advances.

Coronavirus in Asturias: The Federation proposes that there be no decreases in Second B, Third and Feminine

Coronavirus. Medical personnel will use special trucks in the face of attacks