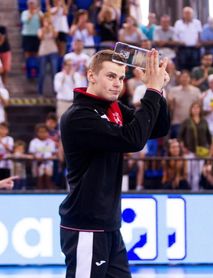 The goalkeeper Sergey Hernandez and the side Iosu Goñi will enter the list of sixteen summoned for the match that the Spanish team will play this Saturday (3:30 pm) against Uruguay replacing Gonzalo Pérez de Vargas and Raúl Entrerríos, to which the coach Jordi Ribera gave rest.

Entrerríos, with almost two and a half hours of play, is the third field player who accumulates more minutes of play in the Spanish team, while Pérez de Vargas also exceeds two hours on the track in the four games played by the ‘Hispanics’ at Egypt World Cup.

Circumstance that has led the Spanish coach Jordi Ribera to rest both the center-back and the goalkeeper in a clash against Uruguay, in which, a priori, the Spanish team should not have problems to achieve victory.

In this way, Sergey Hernández, who will debut in a great tournament with the national team, and Rodrigo Corrales, will make up the goal of the Spanish team against Uruguay.

For his part, Iosu Goñi will reinforce on the left side to Dani Dujshebaev and Joan Cañellas, who in the presence of Raúl Entrerríos in the stands, could help Dani Sarmiento in the team management tasks.

The changes of Raúl Entrerríos and Gonzalo Pérez de Vargas will not prevent them from being with the Spanish team in the next matches, since the International Federation (IHF) allows in this championship, exceptionally, to choose for each match sixteen of the twenty players registered in the tournament.

Cristiano Ronaldo rejects an offer from Saudi Arabia: the details