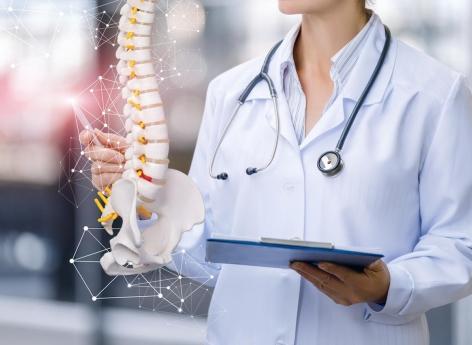 The intervertebral discs are bony structures located between the vertebrae of the spine. In addition to the fact that they allow it to be consolidated, they also provide better shock absorption and create flexibility between the vertebrae, which allows us, for example, to bend over. We count 23 intervertebral discs in our vsvertebral column : 6 in the neck (cervical region), 12 in the middle of the back (thoracic region) and 5 in the lower back (lumbar region).

Back pain, “the evil of the century”

Several pathologies are associated with intervertebral discs, of which there are 3 main forms: neck pain, back pain and low back pain. There is also sciatica, the pain of which begins in the lower back and ends in the leg. These ailments can be due to osteoarthritis or to a herniated disc, which is characterized by wear, deformation or displacement of a disc.

According to Reims University Hospital, “ithis is a very common pathology in young adults (30-55 years), 95% of sciatica in this age group is linked to a lumbar disc herniation. In France, around 30,000 cases are operated per year and 120,000 cases are treated medically. ” Despite these figures, science continues to look for ways to repair a disc, help it regenerate, or soothe the excruciating pain associated with these conditions. Several avenues offer hope to patients.

Cell therapy, which according to Inserm “at sustainably treat the patient with a single injection of therapeutic cells ”, was tested in 2019 to treat degenerative disc disease. The European clinical trial called “ReSpine” led by professor Christian Jorgensen, director of the Institute of regenerative medicine and biotherapy (IRMB) of the CHU of Montpellier, tested the effectiveness of a single injection into the intervertebral disc of a patient, of mesenchymal stem cells ( CSM) from donated bone marrow.

“The goal of this innovative therapy is to reduce pain / disability quickly (within 3 months) and sustainably (at least 24 months). This simple treatment would be effective, non-invasive and easy to implement by clinicians in hospitals ”, say the researchers. According to the CHU, degenerative disc disease affects 70 million Europeans, (42% of patients with chronic low back pain) and costs more than 100 billion euros each year. The results will be made public in three to five years.

In 2018, American researchers presented in Science Translational Medicine the design ofa new intervertebral disc in bioengineering intended to replace a damaged disc. The researchers wanted to combine the subjects’ stem cells with assemblies of biomaterials in the laboratory to create a composite structure intended to be implanted in the spine to serve as a replacement disc.

Over the past 15 years, they have developed a replacement disc for tissue engineering, moving from basic scientific experiments in vitro to actual transplants on small animals, then on larger animals. Human trials are still to be planned.

In 2015, Inserm also presented the works of the’Inserm Unit 791 “Osteoarticular and dental engineering laboratory” in Nantes, coordinated by Professor Jérôme Guicheux. Researchers “have successfully transformed fat stem cells into cells that may be able to replace damaged disks ”, welcomed Inserm. By conducting sheep trials, they shown that a polycaprolactone implant could interact with intervertebral disc cells. If researchers are far from knowing how to regenerate a disc, they hope to be able to prevent their degeneration and avoid recurrences of hernia.

Interested in this topic ? Come and discuss it on our forum!