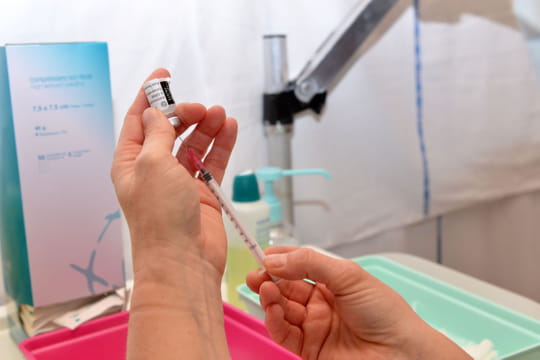 COVID VACCINE. The vaccination campaign is continuing in France. Despite the delivery problems, the Minister of Health indicated that there would not be an extension of the time between two doses while the side effects are closely scrutinized.

[Mis à jour le 27 janvier 2021 à 12h05] In conjunction with the Marseille center, the Bordeaux Regional Pharmacovigilance Center (CRPV) is investigating the reports of side effects of the Pfizer / BioNTech vaccine, reported by the network of thirty-one CRPVs or arriving directly at the Agency. National Medicines Health National (ANSM). At his last report published on January 22, 144 side effects were identified, most of them mild (fever, headache, muscle aches). Thirty-one considered serious… including nine deaths (not necessarily linked to the injection). For the Moderna vaccine (also monitored by the Grenoble CRPV), no adverse effects had yet been notified to the ANSM last week.

Regarding the time between two doses, Olivier Véran has chosen “safety for the French”. Indeed, while the High Authority of Health, recommended to space by six weeks the two injections necessary for immunity against Covid-19, the minister announced on Tuesday that he maintained the current deadline. “I therefore maintain the injection time between two Pfizer injections at 21 or 28 days, or three to four weeks, and ask the actors in charge of vaccination to stick to this recommendation. We are not touching the time limit. ‘injection of the Pfizer vaccine’.

Still on the subject of the delays between two injections, the doses of the Moderna vaccine, quite similar to that of Pfizer, can be administered with up to six week intervals when exceptional circumstances (epidemic which flares up and supply constraints) the require. In any case, these are the conclusions made public on Tuesday by the WHO expert group on vaccination. The American laboratory for its part informed that “the Moderna COVID-19 vaccine produced neutralizing titers against all the main emerging variants tested, including B.1.1.7 and B.1.351 discovered in Great Britain and South Africa However, the South African variant appears to be more resistant but “neutralizing titer levels with B.1.351 remain above levels which should be protective” explains Moderna.

In the United States as in Europe and France, the distribution of the first anti-Covid vaccines continues. This wave of vaccination is not and will not be done without inconvenience, warned American doctors at the end of 2020, who encouraged public health officials and laboratories to warn the population about the very probable side effects of vaccines. In a meeting with advisers from the US Centers for Disease Control and Prevention (CDC), Dr. Sandra Fryhofer questioned the possibility that many people forgo the second dose of the drug. vaccine, discouraged by these side effects precisely.

Volunteers in the Pfizer and Moderna trials testified by reporting high fever, body aches, headaches and severe fatigue experienced after being vaccinated. But this is a very normal phenomenon, according to Bruno Pitard, CNRS researcher at the Nantes-Angers Cancer and Immunology Center, interviewed by Ouest France. “A vaccine is never painless, it is not a Doliprane. It is totally normal that there are side effects. (…) We inject the vaccine into the muscle for the immune system so these are common side effects, it’s not surprising, “he said.

In addition, the National Medicines Safety Agency (ANSM) issued its first surveillance report on the vaccination campaign, which covers the 388,730 people who were vaccinated between December 27, 2020, the date of the first vaccine in France, and January 15, 2021, end date of this first report. According to the findings of this report, 135 people suffered side effects after the first injection of Pfizer vaccine, as the report found no cases among people who were vaccinated with Moderna’s serum. The majority of these 135 cases are not serious, there are only 22 patients who suffered more serious side effects, among whom the tachycardia returned four times. These events invite people with a fragile heart to be vigilant before being vaccinated. Among these 22 cases, there are also three anaphylaxis, two of which required medical treatment. To summarize, the side effects of the anti-Covid vaccine are so far few and not very serious, but it should be borne in mind that studies in this area are currently quite limited, due to the very recent vaccination.

What are the different vaccines against Covid-19?

The race for the vaccine against the Covid will have been the health issue but also the economic one in recent months, the big pharmaceutical companies having made it a priority. It was the American Pfizer, allied with the German BioNTech, which won the end of 2020 by being the first to provide a positive response to the battery of tests carried out. On November 9, its vaccine candidate Comirnaty showed 90% efficacy following an interim analysis of the phase 3 clinical trial, the last stage before approval. A few days later another American lab, Moderna, demonstrated that it had obtained similar results.

If the vaccines from the different laboratories have the same objective, namely to immunize against Covid-19, not all use the same technique to do this. There are various operations:

France intends to invest 1.5 billion euros in 2021 for the various vaccination campaigns. For the time being, only two vaccines are authorized in France: Pfizer and Moderna, for which the government has placed an order for, ultimately, 50 and 24 million doses respectively, via a global order from the European Union for the States members. Six other vaccines were the subject of orders, divided between the following laboratories: AstraZeneca (44 million doses ordered), Sanofi-GSK (45 million), Johnson & Johnson (35 million) and CureVac (34 million).

See also  No confirmed corona infections in Hoorn yet, but more ...

Since vaccination began in several countries, pharmacovigilance is naturally required. Each information from vaccinated people is analyzed and processed in order to learn more, every day, about this famous vaccine. In the United States and the United Kingdom, where the Pfizer / BioNtech vaccine has been administered since mid-December, several vaccinated people – in this case caregivers – have developed serious allergic reactions following the injection, the one of them having, for example, suffered an anaphylactic shock only ten minutes after taking the vaccine. If all these people have since recovered, it still raises the question. So much so that the American and British health authorities reacted by taking measures.

In the United States, it is now advised that vaccination should only be performed in facilities with special equipment, including oxygen and epinephrine, while in the United Kingdom, people who have already been victims of severe allergies are even urged not to be vaccinated yet. In France, we remain more measured, like the press release from the French Allergology Federation. “The history of allergy or anaphylaxis in no way constitutes a systematic contraindication to this vaccination”, we can read. Regardless, these cases of post-vaccination allergy are being followed very closely and studies are underway to determine the cause. The United States Medicines Agency (FDA) said it was “aware of information about an anaphylactic reaction in a person who received the vaccine against Covid-19. The agency will continue to work with the CDC (Prevention Centers) diseases) and Pfizer to better understand what happened, “tweeted the FDA when the first case was discovered.

We take this idea from UDI MP Valérie Six: and if, within a few months, a “passport” was necessary to go to places of culture (museums, cinemas, theaters …) and in restaurants, currently all closed? This famous passport would prove that its holder is vaccinated against Covid-19 and that he therefore presents no risk. “Our group considers that such a measure would be likely to encourage the French to be vaccinated and to raise awareness that vaccination allows to protect oneself, but also others”, explained the parliamentarian, considering that “the The challenge is to make people understand that being vaccinated is an act of citizenship, that it will allow us collectively to find a social life, a cultural life “. Everyone will be the judge of this idea, which already exists in Israel, but Emmanuel Macron promised to the French that he did not want to make the vaccine compulsory and this measure would somewhat contravene this principle for anyone wishing to find a “life normal “.