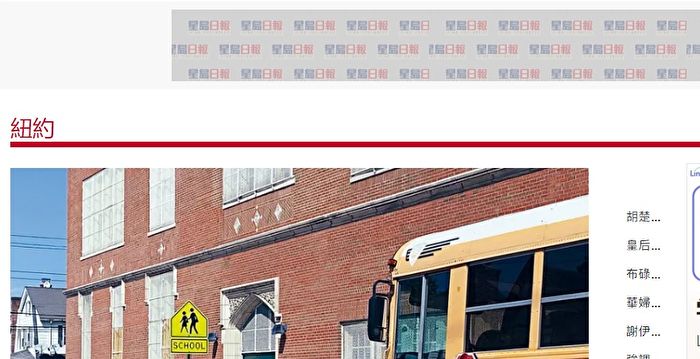 Although the “Sing Tao Daily” raised an objection to its status as a foreign agent, according to the “Sing Tao Daily” (U.S. version) document submitted under the “Foreign Agent Registration Act” (FARA) on August 23, the U.S. Department of Justice determined that the Newspaper’s business in the United States meets the conditions for foreign influence. “Sing Tao Daily” had to check the “Owned by foreign government, foreign political party or other foreign client” column on the registration document.

According to “Sing Tao Daily” in the FARA registration document, the Hong Kong-based company is a private enterprise and is not controlled or influenced by the Chinese Communist Party. They are in a similar situation to other for-profit media companies operating in the United States. And “The FARA (Foreign Agent Registration) Department of the Department of Justice has concluded that (its activities in the United States) constitute political activities for FARA purposes.”

It is understood that apart from the local news page (such as the New York News) of Sing Tao’s overseas edition, which is independently edited by local editors, other pages include international edition, Chinese edition and Hong Kong edition. Most of the editions, news censorship and typesetting work are in Shenzhen, Hong Kong. Centered. Its Shenzhen company also supplies Sing Tao’s newspaper news content in cities in Europe, America, Canada and other cities.

In addition, according to the registration documents submitted by the “Sing Tao Daily”, the newspaper’s business in the United States includes newspapers in New York, Los Angeles and San Francisco, as well as radio stations “Sing Tao Chinese Radio” and Sing Tao TV in Burlingame, California.

In June of this year, Guo Xiaoting (27), the daughter of Kaisa Group Chairman Guo Yingcheng, a wealthy real estate developer in Mainland China, completed the acquisition of a majority stake in Sing Tao Daily. He Zhuguo, the former owner of Sing Tao Daily, resigned as chairman and chairman. Executive director duties. The current board chairman and executive director is Guo Yingcheng, and the majority shareholder is Guo Xiaoting. She also serves as the vice chairman of the board.

Guo Xiaoting (Hui Ting Kwok) is also registered in the FARA document as the director of Sing Tao Daily American newspaper companies in New York, Los Angeles, San Francisco, and California, and is responsible for formulating the company’s overall corporate policies and strategies, including Not limited to and participate in other corporate supervision and management functions”.

In recent years, the Chinese Communist government has also increased its media influence overseas, which has led to a substantial increase in the expenditure of foreign agents in the United States. According to statistics from the Political Response Center (OpenSecrets.org), the Chinese Communist Party’s foreign agency spending has soared from slightly more than 10 million U.S. dollars in 2016 to nearly 64 million U.S. dollars last year, mainly for publicity activities. China is now the largest spender of US foreign influence activities.

According to the “Epoch Times” article on April 14 “[Finance and Business World]Invisible wealthy mainlanders expand their territory in Hong Kong”, under the influence of the “Hong Kong version of the National Security Act” and the epidemic, Hong Kong’s economy has suffered a cold winter. However, Kaisa As a family of billionaires in mainland China, it is expanding its kingdom in Hong Kong, not only buying land, but also acquiring Hong Kong’s “Sing Tao Daily.”

The headquarters of Kaisa Group is located in Shenzhen, and its start is very mysterious. In 1999, the three brothers Guo Yingcheng, Guo Yingzhi, and Guo Junwei from Chaoshan established Kaisa, and quickly started through the renovation project of old projects and the revitalization of unfinished buildings. In 2009, Kaisa was listed in Hong Kong. In 2020, Kaisa’s contracted sales ranked 25th in the mainland.

The relevant information of the Guo brothers before 1999 was almost blank. The way they accumulated wealth in their early years, and how and when they came to Hong Kong were all mysteries, so they were called “hidden rich men” by the Hong Kong media.

Kaisa Group entered the Hong Kong residential market for the first time last year and spent 7.1 billion yuan to purchase 4 plots. On January 28 this year, at a total price of 370 million Hong Kong dollars (48 million US dollars), it purchased 28% of the shares of Hong Kong Sing Tao News Group and became the largest single shareholder of the group. Sing Tao Chairman He Zhuguo’s shares fell from 31.37% to 3.37. %.

The report revealed that Kaisa has a close relationship with the Chinese Communist Party’s Political and Legal Committee system, so it quickly approached Hong Kong’s top rich and was active in the united front circle in Shenzhen. Guo Yingcheng is a member of the “Concentric Club.” This club was established in September 2012 by the Shenzhen United Front Work Department of the Communist Party of China. Most of the members are wealthy businessmen who have close ties to the Jiang faction.

Recently, the CCP has stepped up its public crackdown on the media, especially in Hong Kong. The founder of Hong Kong’s Apple Daily, Li Zhiying, was sentenced to 14 months in prison in April this year. Against this background, why Kaisa, which is engaged in the real estate business, should intervene in the media business and take control of Sing Tao Group has attracted attention from the outside world.

After Hu Wenhu’s death, he was taken over by his adopted daughter Hu Xian (Sally Aw Sian). In the late 1980s, Hu Xian encountered a financial crisis and got rid of the crisis with the aid of the CCP government. Sing Tao Daily gradually transformed into a pro-communist newspaper. Hu Xian also became a member of the CPPCC at that time.

In 1999, Hu Xian sold the equity of Sing Tao Daily to Lazard Asia, a private equity fund. He Yingjie, the eldest grandson He Zhuguo, known as the “King of Tobacco”, purchased Sing Tao Group from the fund through Fanhua Group Holdings in January 2001.

In this year, the “Sing Tao Daily” completely turned its discussion. In July of the same year, He Zhuguo went to Beijing and signed a contract with the party’s mouthpiece “Xinhua News Agency”, unveiling the official launch of “Xinhua Online”. “Xinhua Online” is jointly invested by Xinhua News Agency and He Zhuguo’s Fanhua Technology Group. It is a landmark project of the CCP’s external propaganda. It uses information exchange to subtly transmit the CCP’s political intentions and ideologies to Europe, America, Hong Kong, Taiwan and other places.

As early as 1998, He Zhuguo was elected as a member of the CPPCC and has been re-elected for several terms. He is a reliable “party member”. Sing Tao Daily maintains a high degree of consistency with Beijing on major issues.

For example, in 2003, Tung Chee-hwa, the then chief executive of Hong Kong, in accordance with Beijing’s intentions in Hong Kong, tried to transplant mainland justice into Hong Kong. When it was strongly boycotted, the Sing Tao Daily continued on July 5 and 6 of the same year. Two editorials were published to support the Hong Kong government and clearly showed its red media trump card.

On May 22, 2020, Beijing plans to force the “Hong Kong version of the National Security Law”, which is about the inflection point of the survival of Hong Kong people. When the New York Times and the BBC analyzed the subject of “The Last Day of Hong Kong”, the US “Sing Tao Daily” “Published his boss He Zhuguo’s signed article “Of course” on A10, directly declaring his position, high-profile and common.

In 2021, He Zhuguo sold Sing Tao to Guo Xiaoting, the daughter of Kaisa Chairman Guo Yingcheng, and resigned as chairman.

According to the Sing Tao Group website, the business scope of “Sing Tao” now covers major cities in China, the United States, Canada and Europe.

During the Hu Xian era, Sing Tao Daily won a large number of overseas readers with its neutral and rightist standpoint. Sing Tao’s influence among overseas Chinese was favored by the CCP.

After Sing Dao was included under the flag of He Zhu, the editor-in-chief of the European and American regions was handed over to Rigo, the former deputy editor-in-chief of People’s Daily. He Zhuguo highly valued him and appointed him as the overseas editor-in-chief to delegate the “coordination, coordination and command” of the news operation of the eight overseas branches to people with a background in party media, instead of handing that post to Hong Kong people in accordance with tradition. This is the first time in the history of Sing Tao.

After that, Rigo managed all editorials of Sing Tao Daily and maintained the same direction as that of The Daily News. At that time, after the collision between Chinese and American military planes, two columnists wrote articles on Sing Tao, demanding that the CCP release the American crew and return the American military plane. Sing Tao’s editorial criticized them by name for nearly a month. 2001 was at the peak of the CCP’s persecution of Falun Gong. Within two years, the “Sing Tao Daily” imitated the mainland media and provoked rumors and hate propaganda against Falun Gong in the North American Chinese community.

Rigo returned to Beijing in 2003, and now Sing Tao Group’s overseas editor-in-chief is concurrently held by Kwong Jinglian, the president of its China business. Kwong Jinglian graduated from the Department of Middle School of Jinan University in Guangzhou.

The Jamestown Foundation, an American think tank, published an article exposing the Beijing regime’s control of the Chinese-language media in the United States. The article said that Beijing has made a systematic plan to intervene in the Chinese media. The main strategies are: investment holdings, lure with commercial interests in the mainland, and placement of personnel. According to the article, due to the financial support of the CCP, “Sing Tao Daily” has gradually evolved into a pro-CCP Chinese-language media.

The relationship between “Sing Tao” and the United Front Work Department

According to the 2020 annual report of Sing Tao Newspaper Group, not only is He Zhuguo a member of the CPPCC, but there are several CPPCC members among the directors and senior management of Sing Tao.

Among them, the executive director Jia Hongping has held important positions in various departments under the State Council of China. Independent executive director Chen Fang is a member of the Provincial Committee of the China Political Consultative Conference, and He Chaoqiong is a standing member of the Beijing Municipal Committee of the China Political Consultative Conference, and the executive director of the All-China Tourism Chamber of Commerce under the All-China Federation of Commerce President and Vice President of the National Chamber of Commerce Women Entrepreneurs.

Sing Tao announced the reorganization of its board of directors after changing its boss in June this year. No more details are known yet.

The Point on the Markets. Terna struggles

Bidding battle over huge terrain in the middle of Gentbrugge: inst… (Ghent)