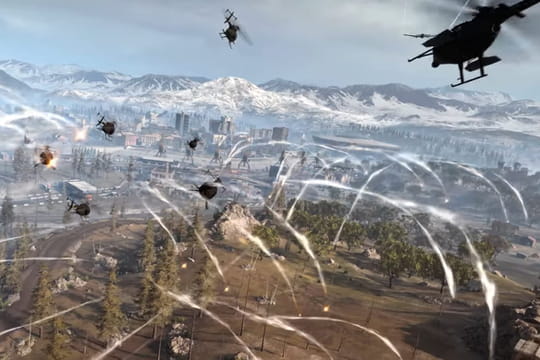 While the new Call of Duty-style battle royale pushes the limits of players by offering games of 150, it seems like it’s only a stage. Soon there will be 50 additional players.

[Mise à jour le 13 mars à 16h58] Infinity Ward, the developer of Call of Duty Warzone spoke about the recent success of the newcomer in the world of battle royale games. It seems that ambitions are in order since improvements will be made “a little later”. We especially remember the addition of 50 players, bringing the total to 200. A first for a “classic” game, which will bring together on a single map twice as many players as on Fortnite, PUBG or Apex Legends. Patrick Kelly, the co-director of the studio explains that this novelty is already under development.

This echoes an emerging demand from players, who want to be able to form larger teams. As a reminder, the game limits, for the moment, the groups to trios. According to Patrick Kelly, it will soon be possible to form teams of 4 or 5. “I can tell you that we have teams of four and five players with whom we already play (in the studio). But we also want to offer something which, we know it works really well, and we tested 9 and 10. “

Over 6 million players in 24 hours

Many millions of connected players, and above all very positive feedback from the community. We can only congratulate the successful launch of the new battle royale in Call of Duty sauce. Developers will surely be keen to see the evolution of the title, which could well beat the record for Call of Duty Mobile, downloaded more than 100 million times. But for the battle royale, it is above all against his competitors that he wishes to impose himself in an already saturated genre. For comparison, Apex Legends had attracted 2.5 million players when it was launched in February 2019. After 3 days, the 10 million mark had been exceeded. It remains to be seen whether Call of Duty Warzone will emulate this dynamic.

For now, the title is still in beta phase. Some gamers were able to report several dozen bugs, which do not spoil the experience, fortunately. We note however that several are major (and should be corrected quickly), like this one allowing to resuscitate ad infinitum. In the video below, posted on Reddit, two players win a game by staying out of the zone and resuscitating each other continuously. Once all other players are eliminated, they win by default.

Warzone is available on all major platforms, and offers the cross-platform. It stands out from other battle royale like Fortnite and Apex Legends by specifics such as the Gulag, which allows the killed players to face another player in 1v1 in order to have a chance to have a second life, but also the fact to have 150 participants in a single game.

Call of Duty Warzone reveals itself

If it takes again the basic operation of the most popular game mode of these last years, Call of Duty Warzone offers interesting novelties. An obligation when you want to stand out from fierce competition and now more than provided. As a reminder, Call of Duty Warzone is from the game Call of Duty: Modern Warfare. However, it is a standalone, that is, you don’t need to have the original game to play it. Also, like many other battle royale games, it is free.

However, it is not only a BR, since another mode called “Pillage” is available. In the latter, the player who finishes the round with the most money is designated as the winner. However, it is its battle royale function that is acclaimed. The latter offers breathtaking battles with 150 players on the same map. Unlike the first Blackout test, the Call of Duty spirit and especially its gameplay are much more felt by the player. The players are therefore dropped on a card with the objective of quickly recovering weapons and equipment. A “zone” gradually tightens, which forces the player to face the survivors in the center of the map.

How is the card?

The map of Call of Duty Warzone is huge. While most battle royale is limited to 100 participants, Warzone is betting on a larger number, with 150 players. However, at no time does the player feel a feeling of congestion. Unlike the solo and team of 4 modes found in competitors, we see here the appearance of teams of three players. Thus, we attend games where 50 teams in trio compete. Some regret this unique possibility. You have the choice not to team up with other players, but in this case, you will still be opposed to trios of players. Recall that the game has just been released, and that it is not excluded, in the future, that these other possibilities arrive. We know that the “solo” mode is particularly appreciated on Fortnite, for example.

This is perhaps the biggest advance over Blackout, and many other battle royale games. The system of loot objects and equipment, but also that of armor is considerably redesigned and reduced in Call of Duty Warzone. The title wants to reduce the time to search for equipment, in order to be able to offer a maximum of actions and greater equality between the combatants.

Armor is available and used to reduce damage from bullets. There is no variant level of protection, unlike BlackOut (which had 3). At the start of the game, each player lands with 100 life points and 2 armor plates. You can equip up to 3. This increases the vitality of each up to 250 units. Finally, the life regeneration system is present, which means that there is no healing band or beacon like in a Fortnite.

Warzone does not use a backpack system, which avoids having to rush to find one when you get into the game (the game therefore aligns with Fortnite). You have two slots for weapons, one for “tactical” equipment and another for “lethal” equipment.

Several vehicles are available. There are quads, helicopters or 4X4. Note that several of them have 4 places, while the teams are only made up of three players. We can therefore logically expect that new team compositions will arrive over time.

The game is available for download on PlayStation 4, Xbox One and PC. However, it seems that you absolutely must download up to 100 GB of data, the original game, even if you only want to access the battle royale mode. If you already have Modern Warfare, the download is reduced to 22 GB. Warzone does not require a PS Plus subscription on PS4, but does require Xbox Live Gold on Xbox One. Cross-play is activated, which means that PC players will be directly confronted with owners of Xbox ONE and PS4.

Coronavirus Live Updates: The United States aims to test speed as the battle against viruses intensifies

Corona virus: disinfect smartphone and cell phone – this is how it works