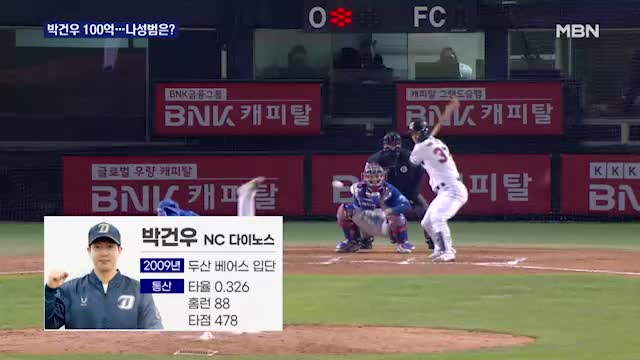 [Anchorment]
Two large contracts were made in the KBO League FA market today alone.
Now, attention is focused on Na Seong-beom, who is considered the biggest free agent. There is also talk of 15 billion won.
Correspondent Kim Tae-il.

【 reporter 】
Since joining Doosan in 2009, Park Geon-woo has played a major role as a starting outfielder with a career batting average of 0.326, 88 home runs and 478 RBIs.

Park Gun-woo, who was released as a free agent this year, signed a contract with NC for a total of 10 billion won for 6 years, including a down payment of 4 billion won and an annual salary of 5.4 billion won.

▶ Interview (☎) : Park Geon-woo / NC Dinos
– “It wasn’t an easy decision, but I decided to take on a new challenge. I still don’t feel like changing the team, but I will do my best to adapt quickly.”

Prior to the news of Park Gun-woo’s contract, Park Hae-min from Samsung announced a four-year, 6 billion won contract with LG.

As two large contracts were made in succession in the quiet FA market, attention is now focused on Na Seong-beom.

It is said that Na Seong-beom, who is considered the biggest word in the free agency market this time, is in the process of adjusting the timing of the announcement by leaving the original team NC and agreeing to a contract with Kia.

A specific amount of 15 billion won over six years is also mentioned.

In addition, the contracts of Kang Min-ho, Son Ah-seop, Kim Jae-hwan, and other FA big players are also of interest.

It is interesting to see how far the large contract butterfly effect triggered by Park Gun-woo will extend.

This is MBN News Kim Tae-il.

Sharca Barca returns from Tenerife in victory in fourth quarter