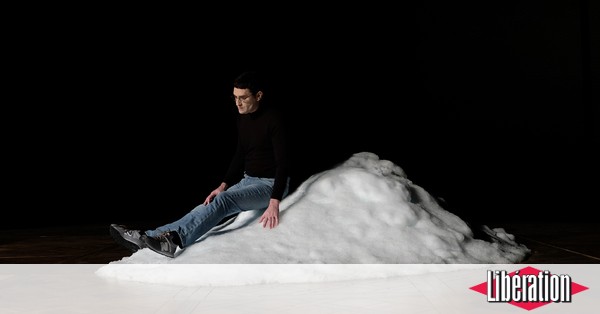 Steve Jobs, show yourself! And who are you, first of all, you who changed our lives? The cool quadra who fits his sweater in his faded jeans during his keynotes, or the thirsty capitalist of control who wants to enslave the world at the yoke of his neuroses? The novelist and playwright Alban Lefranc, who is not at his first falsely biographical or really fictional work, clearly chose the second option for this piece created at the Manège de Maubeuge (North) as part of the Cabaret festival of curiosities, launched by the Phoenix, National Scene of Valenciennes.

Obsessive maniac who seeks to avoid any parasitic micro-decision, technological tyrant disconnected from the world, his Steve Jobs is tended towards the smooth purity of a routine where “It doesn’t matter what to eat as long as it’s always the same thing”. The notion of avoidance runs through the whole show. This ergonomic thought away from chaos is touched on the lighted surfaces of our phones, whose brilliant monologue interpreted by Nicolas Maury explains to us how they allow us, by backlit us, to evacuate in the shade the main problem of our lives, the others. A wonderful text by Lefranc, which makes Jobs understand us at an unprecedented height, that of his sick pancreas. Text unfortunately too diluted, which rehashes its strong ideas and ends, like its Nemesis, to refuse micro-digressions.

There remains the commitment of Nicolas Maury and the radicalism of the director, Robert Cantarella. Both walk on the fringes, in an attempt to give flesh to a virtuality or to strip the human until you only see its contours. The actor seeks a balance between a distant presence and a strong body involvement, undressing and dressing included, in what is similar to a long monologue. His character is also told more through his interactions with others than in what he claims – and Maury cleverly finds something to bridge the image of the lonely visionary and the questioning of the one who wonders “What is the use of a child” ?

Robert Cantarella, he chooses to illustrate on stage the thought of Steve Jobs, and in particular this famous invisible structure which he designed, which he slides into his machines and which allows him to encompass everything, from ass to toaster , and dodge everything. To achieve this, Cantarella notably goes through music. On the garden side, amplifiers play baroque. On the courtyard side, a multi-instrumentalist, Frank Williams, plays live and sings for a good half hour (nylon guitar, folk, bass with loop…) from the popular contemporary repertoire. While in the center of the scene, a mound of snow where rests Steve Jobs attacked by his pancreatic cancer represents his place in the middle of all influences at the same time as the deserted island that he is the only one to live in. Elusive as the character, this rutile oasis before our eyes and escapes us, background without control, finally inviting on stage the unpredictability of chaos. “Naked psychorigide dying on a bed of confusion” would be a good subtitle to the play.

And then there is also the silence of the actress Cécile Fisera, enlisted in an absolutely enlightening idea of ​​staging. Steve Jobs’s wife, who has been sitting motionless in the background since the start of the show, has been approached twice by her husband, who certainly speaks better on his computer keyboard. She brings him the list of his organs, then a medical dictionary. Without saying anything, without producing any sound other than the pounding of his heels on the stage. Everything is then understood, the way the mogul treats those around him and what he returns to him from his non-presence. Steve Jobs, show yourself! But has it ever been there?

Games in good company at CentQuatre