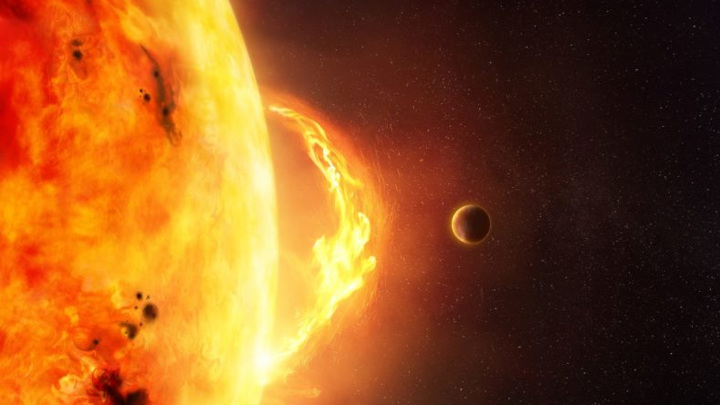 Scientists from Australia and the Netherlands have studied the stars with the world’s most powerful radio telescope, LOFAR. Some of them had a non-standard radio wave “portrait”. The researchers eventually came to the conclusion that this may indicate the existence of hidden planets nearby.

But how can planets emit radio waves? Does this mean that these worlds are inhabited by intelligent beings? Unfortunately, everything is somewhat more prosaic. But at the same time it is interesting.

“We have detected signals from 19 distant red dwarfs, four of which are best explained by the existence of planets orbiting them.

We have long known that the planets in our solar system emit powerful radio waves as their magnetic fields interact with the solar wind. However, radio signals from planets outside our solar system have not previously been recorded.

This discovery is an important step for radio astronomy and has the potential to lead to the discovery of planets across the galaxy, “said co-author Dr. Benjamin Pope of the University of Queensland.

The study’s lead author, Dr. Joseph Callingham of Leiden University and the Netherlands Institute of Radio Astronomy ASTRON, said the team is confident that these signals are generated by magnetic interactions between stars and their invisible satellite planets.

Jupiter and its moon Io interact in a similar way, the volcanoes of which constantly eject material, including into space. Because of this, the giant planet has a constant and powerful aurora, clearly visible in the radio range.

“There are auroras on Earth, commonly referred to as the aurora borealis and aurora borealis. They also emit powerful radio waves – this is due to the interaction of the planet’s magnetic field with the solar wind.

But the auroras on Jupiter are much stronger because its volcanic moon Io pushes material into space, filling Jupiter’s environment with particles that cause unusually powerful auroras, ”explains Dr. Cullingham.

The new model of radio emission from stars is, in fact, an enlarged version of the interaction between Jupiter and Io.

Hypothetical planets are “enveloped” in the magnetic fields of stars and are constantly throwing material into powerful currents that similarly generate bright “auroras”.

This spectacle is so impressive that it attracted the attention of scientists 160 light-years away from the scene.

The research team now wants to confirm in other ways that these planets do exist.

Observations that followed the initial conclusions excluded planets more massive than Earth from the list of potential contenders. However, the researchers do not exclude that planets with a lower mass may be hiding “in the shadow” of distant red dwarfs.

They also emphasize that discoveries made with LOFAR are just the beginning. This telescope is capable of observing stars that are relatively close, up to 165 light-years away.

In 2029, the Square Kilometer Array radio telescope, located in Australia and South Africa, should begin operation.

Scientists hope that with the help of SKA they will be able to study hundreds of similar stars located at much greater distances. This means that we can also find the planets bathing in the radiation of these luminaries.

The discovery of an international group of scientists was published in the scientific journal Nature Astronomy.

Earlier we wrote that scientists discovered a planet whose existence does not fit into existing theories, as well as the discovery of the strangest planetary system. We also talked about the discovery of a hidden earth-like planet in the life zone.

More news from the world of science can be found in the “Science” section of the “Watch” media platform.

See also  Dozens of fuel trucks are on fire on the border between Afghanistan and Iran. Video