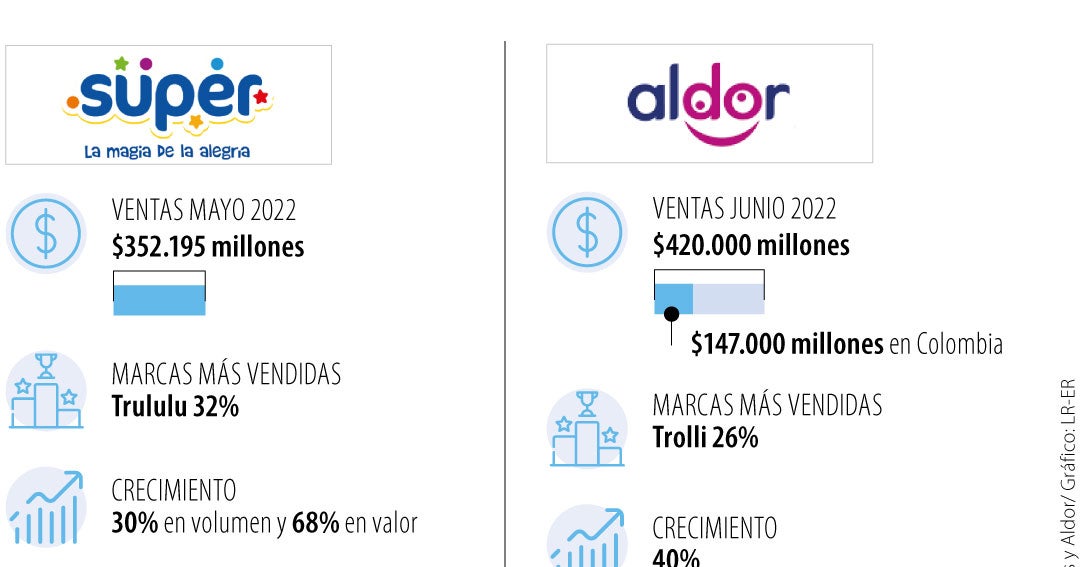 Super Foods from Manizales, Colombina from Valle del Cauca, and Mondelēz International from Chicago are the companies that dominate the confectionery industry in Colombia, through the retail channel. This is confirmed by figures from Euromonitor International.

Only the first two exceed half of the Colombian candy market, with a sales volume of 54.7%, of which 28.5% corresponds to the leader in this category, driven by its flagship brand Trululu, which represents around 13.7% of your income.

According to the report of the international company, Colombina appears as the second player in this market with a sales volume almost equal to its predecessor. In this case, its share is 26.2%, marked by its star product, Bon Bon Bum, which handles 10.4% of its candy demand. Finally, Mondelēz International, which appears as the third biggest competitor, holds a 13.3% share of this cake, with the commercial success of its Halls line, which is the second best-selling candy brand in Colombia (12.2%).

Important players are also involved in this industry, such as: Nacional de Chocolates, part of Grupo Nutresa and recognized for its marketing of chocolate bars and derivatives of the following brands: Jet, Jumbo, Gol, Montblanc, among others; and Aldor Cosmetics, also of Valle del Cauca origin and manufacturer of Pin Pon, Yogueta, Trolli, Frunas and Mentas Click products.

This is how they are located by income

In terms of reporting operating income, the order of this ranking varies somewhat. In the first half of the year, the company led by César Caicedo added the most green numbers in the industry: During this period, Colombina collected $789,726 million in the domestic market and $499,059 million in the international market, which means a growth of 39% and 32%, respectively, compared to the previous year; marked, above all, by its candy business that achieved an accumulated amount of $ 515,762 million, followed by the line of cookies, preserves, ice cream and chocolate.

Behind was National de Chocolates, which affirmed that its category of sweets has positive dynamics this year, due to a greater frequency of consumption inside and outside the home. “We came with double-digit growth in our main markets: Colombia, Mexico, Central America, Peru and Ecuador. Jet is the best-selling brand in the country, with more than two million units per day “says marketing director, Andrés Bueno. It also says that seasons like Halloween represent 60% of the category’s sales. It is estimated that 42% of sales by the end of this year will come from abroad.

In third position appears Super Food with net income of $ 352,195 million reported until May, of which 30% comes from its sales of Trululu gum, according to María Antonia Arango, general manager of the company.

“To date we have grown 30% in volume and 68% in value. It is a record year in sales, where we have increased growth by strengthening export markets and maintaining high levels of innovation in products, packaging and display”, assures director a, after noting that during 2022, they launched more than 12 new products, which boosted exports, which currently represent 42% of the company’s sales in Venezuela, Peru, Ecuador and Costa Rica.

In Aldor’s case, rubber also represents the strength of its business, with a share of 26% of its income, which for this year totaled $147,000 million dollars in Colombia and $420,000 million dollars among all its subsidiaries. Leonardo Aljure, manager of the company, indicates that for the season of the little witches they predict a growth of more than 40% compared to the previous year, with a relaxation in the sales of the Trolli and Frunas lines. “We have already taken many forms with the Halloween concept.”

Candy prices are through the roof

Inflation also knocks at the door of the candy industry. Although it seems that the only ones affected are the food in the basket, the companies in the sector indicate that they have also overcome a series of difficulties due to the high prices of raw materials. Companies like Aldor reported that they faced a lack of ingredients, essential for their production, and the increase in international freight rates that, despite being normalized, multiplied up to five times, affecting their profit margins.

Humankind: Together We Rule Expansion Available in November

A war is also raging in the Kremlin: different camps blame each other for the debacle in Ukraine