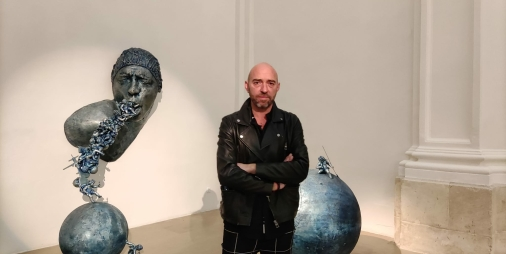 MURCIA. “If I have any religion, it is that of respect,” said the Yeclano artist this Friday. Lidó Rico at the opening of his exhibition Your flight, my wings on the Veronicas Hall of Murcia. Devoid, he says, of the arrogance that is the counterpoint of that respect he professes, he has not wanted to go against the space of the desacralized church -which represents a challenge for any artist-, but has conceived its walls as “the pages of a book that the viewer can open and read, as in a kind of binding “. Inside they will find a universe full of metaphors, symbols and reflections.

It is an eclectic exhibition with nine installations, explains Lidó Rico, where despite the diversity, both thematic and materials – resin, drawing on wood, aluminum and luminescent material – there is a common link, which is that function that has the contemporary art of making people think; in this case about the artist’s own concerns and obsessions regarding the role of man in today’s society.

One of the main challenges for the creators exhibiting in Verónica is how to solve the large space of the altar. Lidó Rico has not had it because he has built an altarpiece with 91 pieces, a series that began more than a year ago and that are like windows that people who suffer from loneliness and misunderstanding look out. A premonition of the artist that came true during the confinement that began in March, during which he continued working on this project, which he conceived as a building and which he painted with his own fingerprints. “Art speaks when there is no lie,” he says.

See also  Irena Santor decided to make a moving confession: All my life I haven't talked about it ...

Reflecting the anguish of those days, dozens of resin angels they flood another of Verónica’s walls that, in principle, were going to be part of a ‘softer’ work. But Lidó Rico already says it, “I know myself and being calm does not enter my dynamic.” He incorporated into each piece of this particular ship skewed views of the sea, which are “like little jewels that hurt.” Because man, he reasons, can see fragments but never the sea in its entirety. What’s more, crosses are very present – “the greatest and most sublime of abstractions” – to represent how “man feeds on symbols and neglects himself”.

One can also see in Veronicas a piece by Lidó Rico that represents the despair of man at not being able to arrive, surrounded as he is by horses with a truncated leg; while in another he has recovered some works that he made when he was 12 years old and that “my parents bought”, in which the boy who was already thought of giants

Through the church transept, where a large self-portrait of the Yeclano creator is located, one reaches the barred area of ​​the Veronicas Hall in which hundreds of elements loaded with symbols make up a circle that lights up intermittently; when the room is off, the large sphere turns a mysterious psychedelic green.

The last word to interpret “this language of the soul” of the artist is the one who observes these pieces, since Lidó Rico says that he conceives “art as a mirror; the viewer closes the circle of the work. I need it as much as the work itself. “.

Among the first viewers of the show were the Minister of Culture, Esperanza Moreno, and the director of the ICA, Juan Antonio Lorca. “Lidó Rico dialogues with the monumental Sala Verónicas. It seems that two powerful titans who are based on greatness and the sublime understood each other perfectly. Your flight, my wings it demonstrates the coherence of a consolidated body of work throughout its thirty-year history and at the same time poses a new challenge, more ambitious if possible, and from which it has emerged victorious, “Esperanza Moreno said about the exhibition.