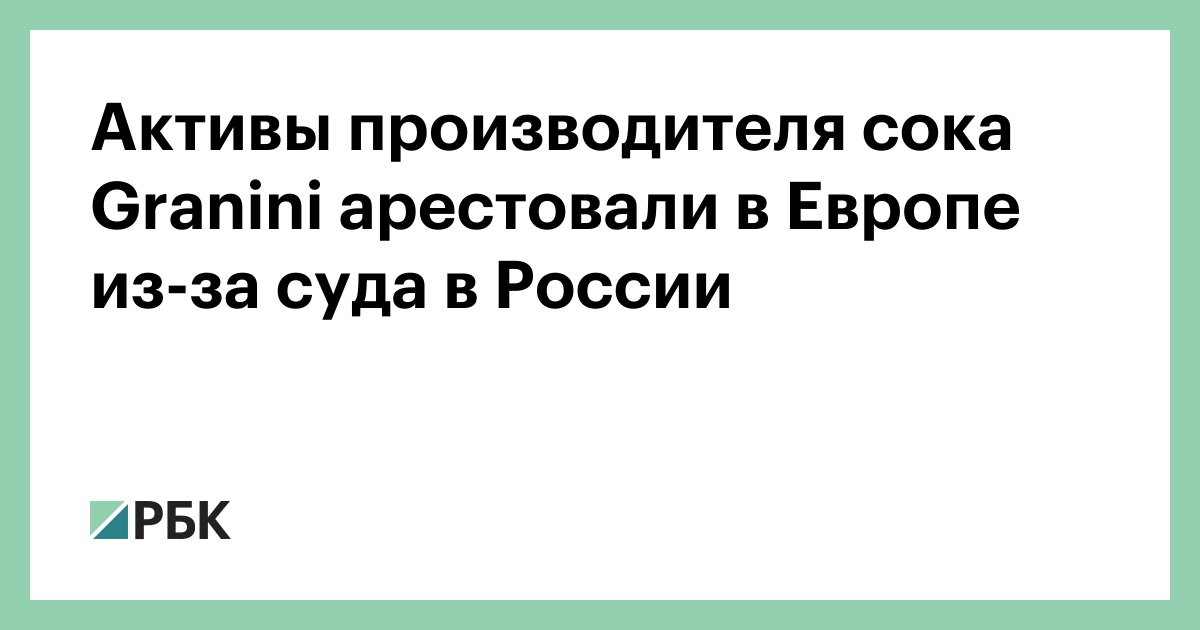 Why the juice company was having problems

The seizure of Eckes-Granini’s assets in Europe is due to the non-execution of the decision of the arbitration court in Moscow on the dispute with Hartmann, with whom the company tried to develop business in Russia together.

Eckes-Granini has been working in Russia since 2001. Until 2006, the company bottled its Uslada brand under a license agreement at the Gutta plant near Moscow, then at the Nidan Soki plant. In 2007, the company, as reported by the media with reference to its data, occupied about 2% of the Russian market. But later, Eckes-Granini sold its only Russian brand to the Raritet distribution company and curtailed production in Russia, focusing on supplying premium juices here in glass containers.

By 2009, according to Euromonitor data cited by Kommersant, Eckes-Granini’s share in the Russian market fell to 0.1%. Now in the largest Russian retail chains the brands Granini and Pago are represented. According to the Union of Juice, Water and Beverage Producers, all imported juices now account for about 5% of the Russian market. Most of the imports come from Poland, Belarus and Armenia.

It was Hartmann, as reported by the media, in 2005 acquired the Gutta plant in Mytishchi near Moscow – according to one version, in order to develop a joint project with Eckes-Granini, which planned to dramatically increase sales in Russia. Hartmann himself then confirmed that he became the general director of “Gutta”.

In 2007, Hartmann and his affiliates, including Gutta, entered into a mutual claims settlement agreement with Eckes-Granini with an arbitration clause. In 2012, a supervision procedure was introduced in relation to Gutta, and in 2013 the company was declared bankrupt.

See also  Coronavirus: An Evidence-Based Preliminary Study on Hydroxychloroquine in the United States

Eckes-Granini, without written notice, refused the services of his company in Russia, still has not paid the bills and brought the company to bankruptcy, says Hartmann through a representative.

These claims are unsubstantiated, argues a spokesman for Eckes-Granini. He insists that the company stopped cooperation with the former partner in 2008 “with the consent of all parties and in accordance with the agreement”, since it left the Russian market. The partner, according to a spokesman for Eckes-Granini, “did not object” to the termination of the contract, and the company was surprised “when almost ten years later” he filed a claim with her.

What is known about Axel Hartmann

A native of the German city of Wiesbaden, Hartmann in the 1990s, as Sekret Firmy wrote, decided to do business in Russia. In particular, in 1997 he founded the company AksiS & Co, which was engaged in the import of groceries and advised international players entering the Russian market, including Nestle and Ferrero.

Under the leadership of Hartmann, a national network was created to promote dairy and chocolate products from Europe in Russia. From 2000 to June 2005, Hartmann headed the Russian office of the German dairy producer Ehrmann.

In March 2020, Hartmann was declared bankrupt by the decision of the Moscow Arbitration Court, and a debt restructuring procedure was introduced in relation to him.

How Hartmann and Eckes-Granini litigated

In December 2016, Hartmann, in accordance with the clause, initiated proceedings under German law and in German in the Russian arbitration court under the ad hoc procedure (unlike permanent courts, a group of arbitrators gathers to consider a certain case). The defendants were the Eckes-Granini structures and its managers.

In May 2019, the arbitrators decided to partially satisfy the claims and recover from the defendants in favor of Hartmann about € 49 million in damages, interest in the amount of 5% per annum on this amount, additional costs of the plaintiff for the proceedings, etc.

Disagreeing with the decision of the arbitral tribunal, Eckes-Granini and other defendants applied to the Moscow Arbitration Court to overturn it. In August 2020, the court refused them. The cassation complaints were also left without satisfaction. In February 2021, Eckes-Granini also refused to consider the cassation complaints by the Supreme Court.

The decision of the arbitral tribunal “was made in violation of elementary legal norms,” ​​says a spokesman for Eckes-Granini. The fact that this decision was confirmed by the state courts of Russia, according to the company, does not change anything, since none of these courts took into account the errors of the arbitration court.

The State Duma supported the reform of the arbitration courts

In agreement with the shareholders, the board and supervisory board of Eckes-Granini decided not to comply with the arbitral tribunal’s decision, the representative of Eckes-Granini said, adding that in the spring of 2020 the company took measures thanks to which the decision of the arbitral tribunal in Russia will already be evaluated by a German court – the proceedings will take place in September 2021 at the Supreme Regional Court of Koblenz. It was on the eve of this proceeding that the seizure of assets was initiated, said a spokesman for Eckes-Granini.

Eckes-Granini is trying to evade the execution of the judgment, in turn, says Hartmann.

Refusal of voluntary execution of the arbitral tribunal’s decision in practice is not uncommon, states the lawyer of Forward Legal Daria Shlyapnikova. The party in whose favor the decision was made may apply for the enforcement of the arbitration award at the location of the debtor or his assets.

Defendants can raise objections to the enforcement of the decision – for example, they can claim that the arbitration has ruled on a dispute that is not provided for or does not fall under the terms of the arbitration agreement, Shlyapnikova points out. Another, she said, a classic argument in defense of debtors is that the recognition and enforcement of an arbitral award is contrary to public policy in the country of execution. Since in this case, the arbitration collected losses from the defendants about € 49 million with an accrual of 5% per annum up to the payment of the amount of losses in full, the debtors, defending themselves at the place of recognition of the arbitral award, risk interest accrual, the lawyer warns.